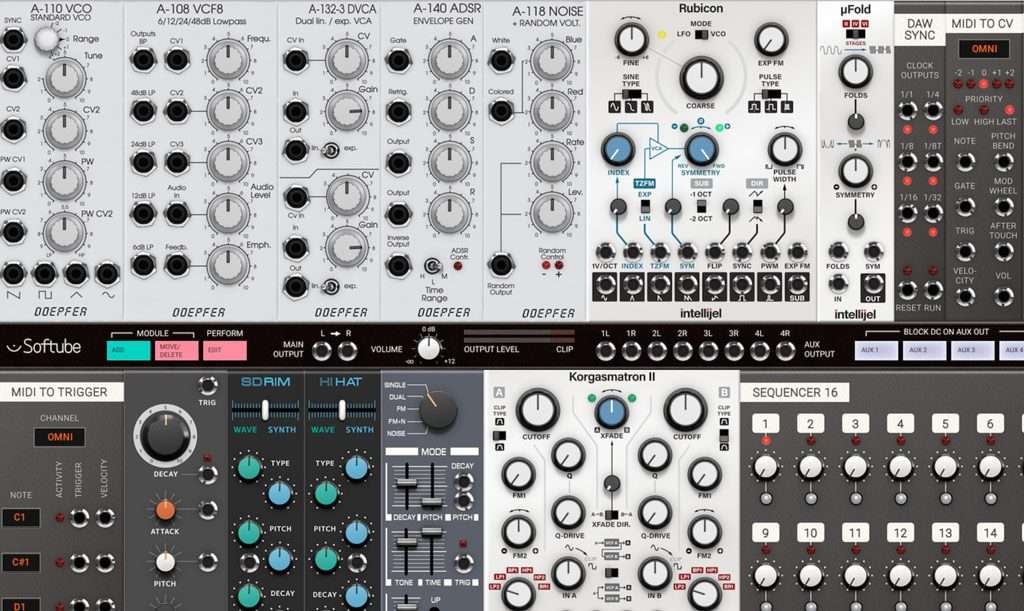 First things first: Softube Modular is a pretty complex platform and you can already find plenty of information about specs and features on the web, starting with the official website.
Here we would like to provide you with an honest, independent opinion from a user who has been intensively working with Softube Modular for the last 445 days (as of today, 17 October 2017).

Take it away, Rolf!

Modular is a cross-platform modular synthesizer plug-in that emulates a eurorack system.
The plug-in offers a solid basic system and a number of expansion modules (more details at the bottom of this page). It’s worth mentioning that all the modules you find on Modular are officially licensed from their original makers.

Did I already mention that Modular is a software? Well, seriously, when I set up the first patch and had linked the knobs to a capable MIDI controller, I got this “tweaking the knobs feeling/fever” again, the first time after nearly 40 years (back in the days before family, before regular jobs and before being banished to 3% of my own house by wife and 5 daughters!).

When I saw Modular, it looked like a great chance to take up modular synthesis again after all those long years, but I was very skeptical.
So I tried and… Modular felt great! It’s as close as it gets to handling a real hardware system and the sound… is analog, nicely inaccurately analog, as you would expect from a real modular system.

Who is it good for?

Is Softube’s Modular a good introduction to the modular world for those users who are still new to it?

The answer reads: yes and no.

Yes, because besides what I mentioned above, it’s easy to start patching (even if you don’t know what to do!) and the software is rock solid. I have used it in 3 different DAWs, Ableton, Reaper and FL Studio, and never had a problem, plus it features plenty of classic and basic modules.

If you’re into iconic modular sounds, these will allow you to get close to the patches we heard from Klaus Schulze, Tangerine Dream, Suzanne Ciani, Emerson, Lake and Palmer, etc.
Once you become more familiar with Modular (and its more advanced modules) you can get even closer -it’s a pity that there isn’t any ratcheting sequencer in it so far, but watch my tutorial no. 9, more on this below.

So why “no”?  Why isn’t Modular the ideal instrument for newbies? Simply put, because of the manual.
Ok, the manual is comprehensive and contains all the information you need – if you understand what it is all about. And a beginner entering the world of modular synthesis does not know what it is all about!

By the way, this is a common problem in this industry: I don’t know a single manual in the world of synths and softsynths, which answers the needs of a beginner.

In other words: there isn’t anything like an ideal modular synth for somebody who doesn’t already know at least the very basics, and even knowing these things like CV, Gate, Trigger etc. you would have a hard time understanding all functions of the modules without additional explanations.

So, ladies and gentlemen (shameless self-promotional moment!) I would suggest you watch my tutorial videos, starting with this one…

Is Softube’s Modular the best softsynth to start with modular synthesis?

In my opinion, to start learning modular synthesis there are a few softsynths that stand above the rest, and Softube’s Modular is definitely one of them.
With an affordable entry cost, Modular offers an excellent (and fun) educational experience that will be of great help later, once you start buying your first real modules.

If you’re wondering, the other virtual instruments I was talking about are SoloStuff’s Solorack and VCV Rack – FYI: we’re not not including the otherwise very popular and powerful Reaktor from NI, Madrona Lab’s Aalto and others simply because we feel they don’t really belong here).

I wouldn’t really compare these to Softube Modular though. They’re still pretty new (and from much less established developers – which is not necessarily a bad thing, but can be a relevant fact when it comes to complex software like these) and their approach is different.
Hopefully, this will be the subject of another article in the near future…

Would I recommend Softube Modular to both modular synthesis newbies and experienced users?

Yes and yes, I totally would! (wow, an unambiguous answer at last!)

The key factors for me are the quality of sound, stability, excellent emulation of the hardware modules (again, we’re talking of officially licensed emulations from a company that is a leader in the audio modeling market for many years) and… the fact that you can actually save your patches!

Eureka! It’s software – so you can save everything, take it anywhere, reproduce them on a real hardware system etc.
I think that the aspect of portability is the biggest advantage over hardware modulars, bigger even than the ability to save patches. Plus, you don’t have to deal with patch cables (which can be expensive too!).

True, the uniqueness of the moment, of a patch setup, bears a creativity in it, which gets lost with the fact that you can easily save what you have done so far.
But on the other hand – well, with a software-based solution like Modular, you are the boss.

For more experienced users, a software like Modular (with virtual versions of actual modules they might have in their systems) can also be of great help in experimenting with new patching ideas, especially on the go.

And a last, but important point: Softube is constantly developing and adding new modules (see the new Buchla 259e), so that a user investing in this system won’t feel ‘trapped’ into a finished/closed system. Think of it rather as an evolving musical instrument (warning: evolving rhymes with tempting – after all, there’s a reason why they call it eurocrack!).

Alright, I think I’ve answered all questions but the last one…

What are the issues?

Well, I’ve already mentioned the manual. It’s ok, but could be much better.
There’s something else to consider though, which might be an issue for some of you: to run Softube’s Modular without underruns and crackles make sure you have a powerful computer. The problem doesn’t occur when using just a few modules, but it does occur when building up a bigger patch.

I’ve got an Intel i7-3820 CPU running at 3.60 GHz (16 GB RAM) and I have to take some precautions when I’m working with patches that use lots of modules (i.e. 3 Doepfer oscillators, 3 filters, 3 envelopes, a sequencer and two LFOs in Modular’s rack).

The more sophisticated the modules are (Korgasmatron II etc.), the less modules you can use without underruns.

The good thing is that you can try Softube Modular for free for 20 days on your machine and decide for yourself.

With an affordable entry cost, Modular offers an excellent (and fun) educational experience…

That’s all for today! There are only three things left to say:

– first: Have fun with Softube Modular!
– second: watch my videos on YouTube!
– third: go and watch them! Really! 🙂

Softube offers a basic system ($99) that gives Modular owners a great toolkit to get started. It includes 6 modeled Doepfer modules and 20+ utility modules.

Additional modules from quality hardware manufacturers (including Intellijel, 4MS, and Buchla) are available for separate purchase, with more continuously in development.

Written by Rolf Kasten – Editing and additional content by Fab