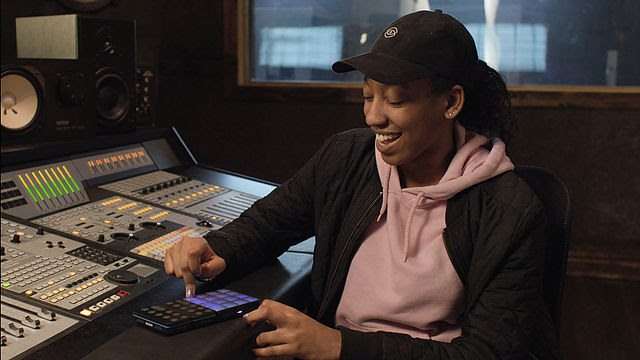 ROLI today releases the short feature film Distorted Bliss, a collaboration with 20-year-old hip-hop prodigy WondaGurl, to celebrate the release of her signature soundpack on NOISE, ROLI’s free iOS music-making app. The video captures WondaGurl’s unique perspective on music creation, her journey as one of hip-hop’s rising stars, and how these factors influenced the creation of the new soundpack.

The Distorted Bliss by WondaGurl soundpack launches alongside two others: Structure and Chillwave Drifting. Available today, they join a growing collection of sounds available to all music-makers on the NOISE app and BLOCKS, ROLI’s award-winning music creation system (also featured in our Sonic Joy awards in the Best Controllers and Innovations of 2016).

The Distorted Bliss soundpack comes straight from the Toronto studio of WondaGurl, who was only 16 when she started winning beat battles and producing chart-topping tracks for Jay Z, Drake, Travis Scott and SZA. A self-taught producer, she has a favorite new music creation technology: BLOCKS. The modular BLOCKS system, which works in tandem with the NOISE app, lets anyone shape sound on an illuminated, touch-sensitive musical surface.

“This soundpack has pushed me to make some crazy stuff that I’ve never tried before,” WondaGurl says in ROLI’s video about Distorted Bliss, which captures the gracefully gritty sound that her fans know from tracks like Jay Z’s “Crown” and Travis Scott’s “Uptown.”

ROLI previously announced the Spoonful of Grit by RZA and Neon Future by Steve Aoki soundpacks in January 2017, launching a series of soundpack collaborations with some of the world’s leading artists.

If you missed it, watch RZA’s Spoonful of Grit soundpack feature film:

Structure, another soundpack releasing today, has hard-hitting techno sounds like FM basses, cutting leads and glitched-out drum kits. Chillwave Drifting is a downtempo pop collection of dusty beats, luscious synths and the pure-air atmospheres of a Pacific beach at sunset.

Other soundpacks for BLOCKS and NOISE include World Colors, Giant Dubstep, and Expressive Electronic. Covering a vast sonic territory from fuzzy synths to video-game pings and acoustic guitars, the collection of ROLI soundpacks will grow through monthly releases from acclaimed artists and sound designers.

Twelve soundpacks are now available in the NOISE app’s Soundpack Store. Six are priced from $3.99 to $6.99. Six others – including Structure, Chillwave Drifting, and Giant Dubstep – are exclusively available for BLOCKS and are free with every purchase of a Lightpad Block, Loop Block or Live Block.

Download NOISE today from iTunes, and explore the sounds of WondaGurl, RZA, Steve Aoki and an international group sound designers. For more info about BLOCKS, check out ROLI’s website.