In our 2016 Muskikmesse live report we anticipated that the iConnectivity guys were working on some new studio-friendly products. We couldn’t say more at that time but today the Canadian company announced the mio™ Advanced MIDI Interfaces, a new line of ultra-versatile MIDI problem solvers offering support for 0 to 2 computers simultaneously, plus built-in MIDI merging, filtering, remapping, and routing.

iConnectivity is well known among mobile and desktop music makers for its comprehensive line of connectivity problem-solvers (see our recent iConnectAudio2+ review) and their new mio™ line is an ideal complement to their existing products.

Welcome mio
I fondly remember some of the MIDI workhorses of the past (I had a soft spot for the Emagic AMT-8!).
Well, for all those users who require a modern, reliable MIDI setup, the new mio2™, mio4™, and mio10™ offer plenty of attractive options: they work stand-alone or with up to two computers, with technology incorporating not just 5-pin MIDI but also USB MIDI, Ethernet MIDI, and inter-computer MIDI.

They accommodate every type of setup used in a modern music-making environment, and their advanced MIDI merging, filtering, remapping, and routing functions take the place of extra hardware units. Last but not least, they are USB MIDI Class-Compliant, no drivers required.

Three is the perfect number
Here are more details on the three models of the mio line: 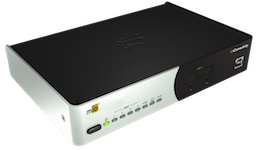 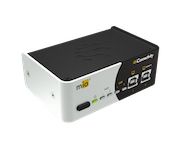 What’s the difference with the iConnectMIDI4+ and 2+?
While the iConnectMIDI4+ and iConnectMIDI2+ are specifically designed with hybrid iOS/desktop setups in mind (with extra features like Audio PassThru – the digital routing of audio between devices connected to the interface), the new mio products can be considered ‘pure’ MIDI interfaces.
They DO work also with iOS devices (via Camera Connection Kit or Camera Adapter) but unlike the iConnectMIDI line, they focus on a more traditional, platform-agnostic solution.

This also means that the mio interfaces are more future-proof and won’t be affected by Apple’s ever changing mood.

What to buy? Well, if you’re primarily an iOS musician (with one or multiple iPads/iPhones) I would still go with the older models. If you make music mostly with the computer and/or MIDI hardware gear, the mio line offers a comprehensive routing solution that will serve you well.

Read more about the mio line on the iConnectivity website.
Note: pre-ordering/buying through our links in this page helps us running this website. Thanks for your support!