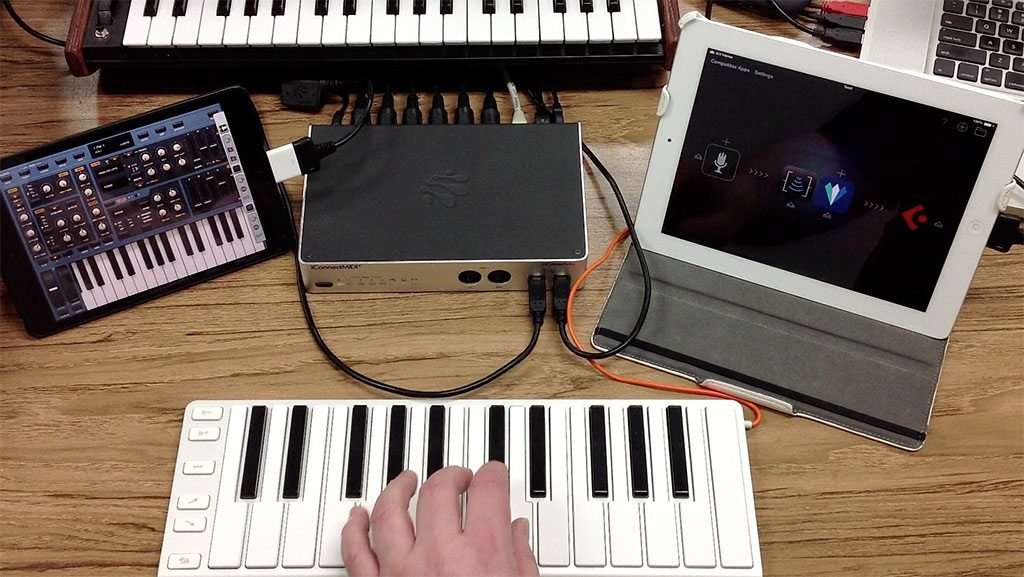 To understand what has made iConnectivity products so attractive to me and why iOS 9.3 is so important, I’d like to indulge in a little history on my use of iPads in music creation, so you can catch a little of my enthusiasm and understand the relief that iConnectivity device users share now that iOS 9.3 has been released!

In addition to being a musician, I’m also an electronic engineer and I’ve been a small device / portable device gadget geek for a long while: Palm devices, Pocket PCs, etc. Then along came Apple with their iDevices.

When Apple first released the iPad I admit I could not see the point in owning one. I was using PCs at the time – latterly Macs as well – in studio setups and didn’t see a need for an iPad either for music production or anything else.

However, when Korg released the iMS-20 app shortly after the iPad launch, I was immediately hooked by the realism and beauty of the port and a little while after picked up an iPad 1 specifically to run iMS-20 on! I added Animoog, Auria, Cubasis, iPolysix, and a number of others in pretty short order as it became clear that the iPad provided a great mobile music creation platform. 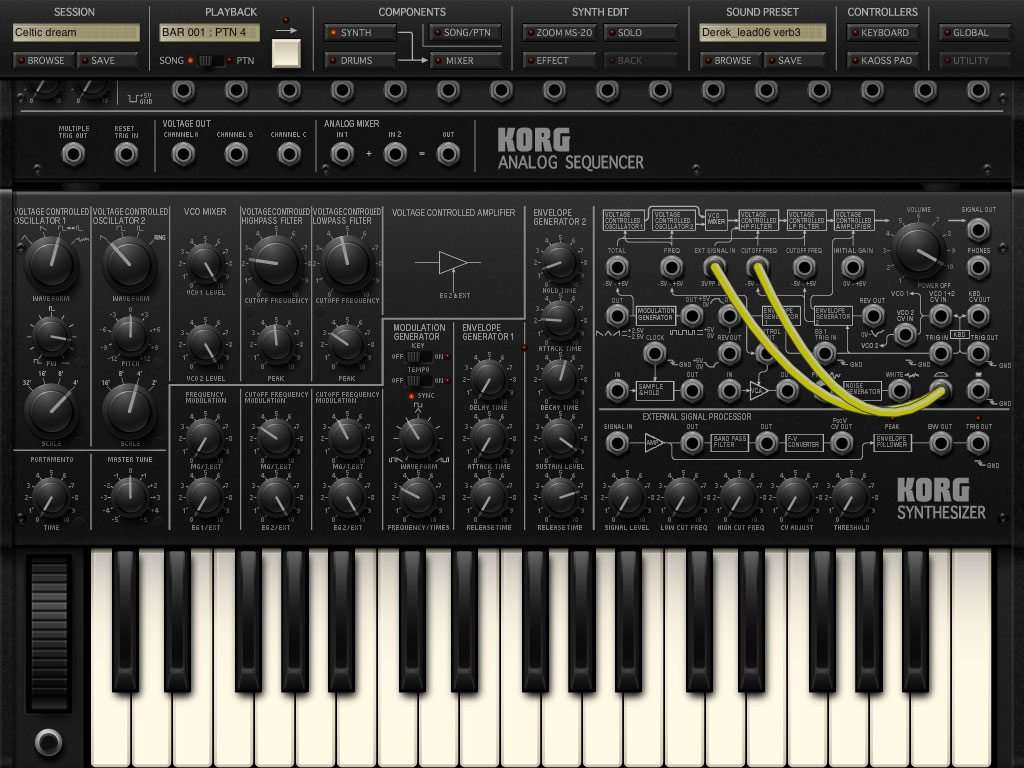 No longer did I have to lug a laptop around. The touch screen provided great interaction. The quality of the apps was great. MIDI control was getting incorporated slowly too; subsequently, I’ve added dozens of other iPad music creation apps.

Along came iConnectivity devices
Over time, I picked up a couple more iPads and wanted to not only use them for mobile music creation but also incorporate them into studio setups. I started off using the iRig MIDI 1 interface to get MIDI I/O to/from my DAW via DIN MIDI connections and used jack audio out to send audio into my studio audio interfaces. However, there was still the audio quality issue with its D/A -> A/D conversion. The iPad was capable of producing high-quality digital audio, but I couldn’t easily get at it.

When iConnectivity announced the iConnectMIDI2+, with the ability to connect an iPad to another computer directly, I knew immediately that I needed the device for hooking up an iPad to my studio system. I think I was probably one of the first purchasers of an iConnectMIDI2+. Right away it transformed my incorporation of iPads into my studio rig. It gave the advantage of bi-directional digital audio I/O to/from the iPad as well as bi-directional MIDI I/O. No D/A -> A/D conversion. Of course, the iConnectMIDI2+ relied on having another audio interface in the studio setup – but for my purposes, that was fine as I already did.

Subsequently, iConnectivity have released the iConnectAUDIO4+ (and have recently announced the iConnectAUDIO2+), providing not only that bidirectional audio and MIDI I/O to/from the iPad to a Mac/PC but also Line/XLR/HiZ analog audio as well, routed and mixed in the box itself.

Using the iConnectMIDI2+ I was also able to not only use the iPad music apps as outboard instrument sources, but because of the flexible routing that the box provided, to route desktop DAW sends and inserts through the growing number of excellent FX apps that were hitting the app store. Crystalline is still one of my favorite outboard iPad FX apps for example. While I have several pedal board setups for guitar, I also incorporate FX apps like Tonestack and BIAS FX (see also our BIAS FX review) for extra sound shaping as needed, by routing through the iPads. Fantastic possibilities.

Alongside the iConnectMIDI2+, the iConnectMIDI4+ – aggregated with other audio devices in the Mac studio setup – gave me the ability to route multiple synths and outboard FX simultaneously. I now keep three iPads permanently hooked in via those two boxes for just that purpose. Not only can I route to/from the Mac with the iConnectMIDI2/4+, but I can also route to/from each iPad as well and leverage the power of each one working together in combination. It’s a wonderful playground to have.

Also, the DIN MIDI on the iConnectivity boxes allows me to hook up analog and virtual analog synthesizers, and via the USB hub I also connect multiple class-compliant MIDI devices such as the MicroBrute (see our Microbrute review), Xkey 25 and other MIDI peripherals.

When working solely with iPad recording my preferred DAW is Auria Pro – although I’ve created a good number of tracks using Cubasis as well. The update from Auria to Auria Pro (see our Auria Pro review) last year that added MIDI and other new features has, for me, put it in first place in terms of ease of use on the iPad. It also works especially nicely with the iConnectAUDIO4+ for on-the-go recording. 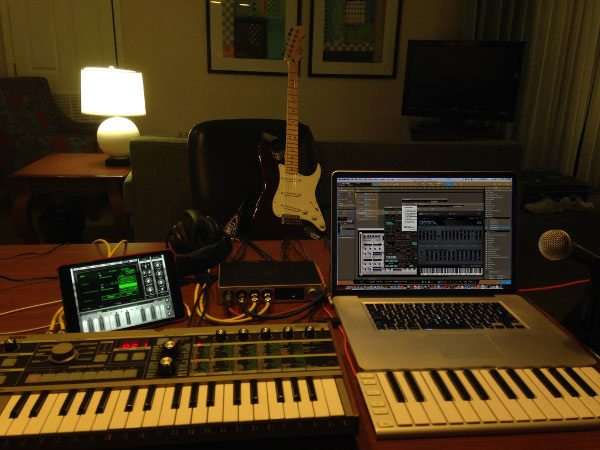 Although it’s a little aside, an article like this would not be complete without mention of Audiobus as it’s been crucially important to the growth of iOS as a professional music platform. However, it’s also important to understand the history a little with respect to the development of iOS versions and why users have either upgraded iOS – or not. That then leads us to understand a little better why the problem that affected iConnectivity devices prior to iOS 9.3 reared its head and caused the consternation it did. 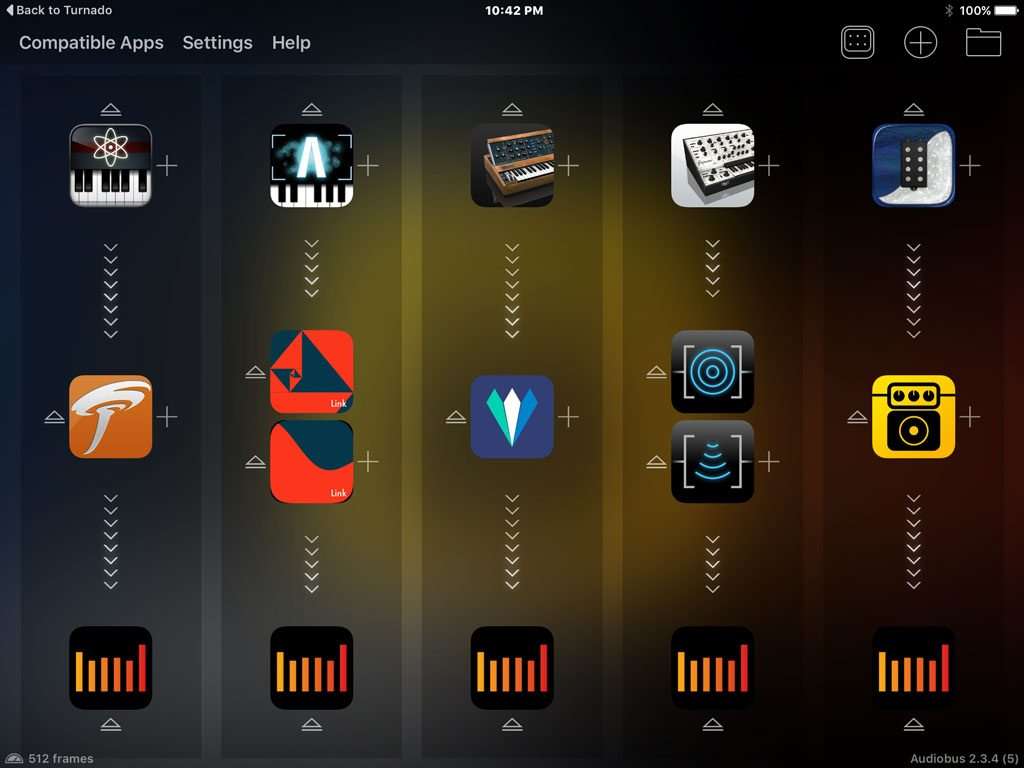 When Audiobus was released it kicked iOS music production into high gear. It allowed music apps to communicate with each other so that one can for example send the output of a synth through several FX apps and then into a track in a DAW very easily.

Between iOS 5 and iOS 7 there was a huge acceleration in the number of music apps being produced, largely as a result of the possibilities that Audiobus’ interconnectivity opened up. In the studio, using the iConnectMIDI2+ and iConnectMIDI4+ in conjunction with Audiobus allowed me to run complete Audiobus chains as outboard FX as well. Amazing!

When iOS 8 was released and Audiobus had to move to using Apple’s own Inter App Audio under the hood there was a performance reduction. It meant that older iPads now did not function as effectively as they had under the last release of iOS 7, namely 7.1.2. Many iOS musicians elected to stay with iOS 7.1.2 and older app versions as a result.

A number in the iOS music community sought to raise public awareness of the performance concerns – even going so far as to write to Tim Cook directly with video demonstrations of the problems that iOS 8 had introduced for audio throughput.

Thankfully, we weathered the growing pains of iOS 8 – some faring better than others, especially those who bought the latest faster devices. Our hopes therefore were pinned on iOS 9 for improvements. But then… 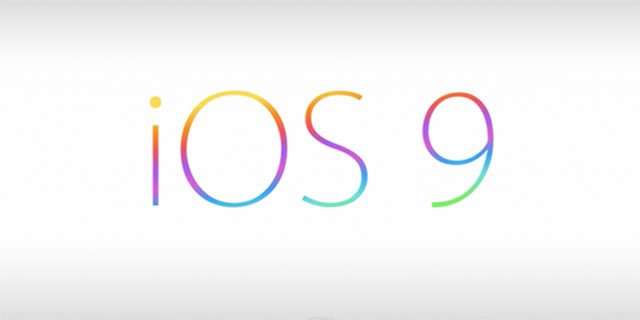 Although iConnectivity had followed industry standards in the production of their interfaces, Apple misstepped in the initial releases of iOS 9 and El Capitan. They introduced a timing and sampling bug in both operating systems that rendered the iConnectivity devices unusable at certain sample rate / bit depth combinations – most notably 44.1k/16 supported by Audiobus – when two devices using the iOS 9 / El Capitan combination were used simultaneously. Effectively they ended up fighting about who should be the audio clock master source. That also applied to the situation where a user had elected to use the iConnectivity device as the audio clock master and had an attached iOS 9 iPad or El Capitan Mac. The Apple device still wanted to take charge.

Not everyone was affected equally, however. If only one device was on iOS 9 or El Capitan, e.g. an iPad on iOS 9 and a Mac running Yosemite, the issue did not manifest itself if the clock source was set to the iPad – (and vice versa if the iOS version was less than 9 and the Mac was running El Capitan).

This was bad news because a good number of iOS musicians had updated multiple iPads that they were using concurrently with iConnectivity devices from iOS 8 to iOS 9 in the hope of solving some of the performance issues that iOS 8 had introduced. Initially iOS 9 did seem to perform better, (more on that in a moment), but those who had updated multiple devices were now stuck with an unusable iConnectivity device and it was something only Apple could fix. The same was true of course if a user had both an iPad and a Mac and had updated both to iOS 9 and El Capitan respectively.

The good news is that as iConnectivity worked closely with Apple to demonstrate the issue, Apple listened and fixed the problem. Not only that, Apple has also worked with Moog regarding other performance issues that were introduced in iOS 8 and 9 that have now also finally been fixed.

A small caveat about iOS 9.3
I’ve conducted some tests on both 64-bit and 32-bit devices over recent days since the release of iOS 9.3. The results are in, and it appears that 64-bit devices (Mini 2 and above) benefit well from the 9.3 upgrade generally in terms of audio app performance, returning to the same as or better performance – especially with Audiobus chains – than how things were with 7.1.2. So my general recommendation (YMMV as always) is that most iOS musicians using 64-bit iPads can safely upgrade to iOS 9.3 now.

However, the performance with 32-bit devices (e.g. a Mini 1 or an iPad 2 or 3), while improved over earlier 8 & 9 releases still seems to be a little worse than with 7.1.2. In many ways that’s to be expected: the future is with 64-bit iPads for iOS music production and that’s where Apple have focused their optimization efforts. 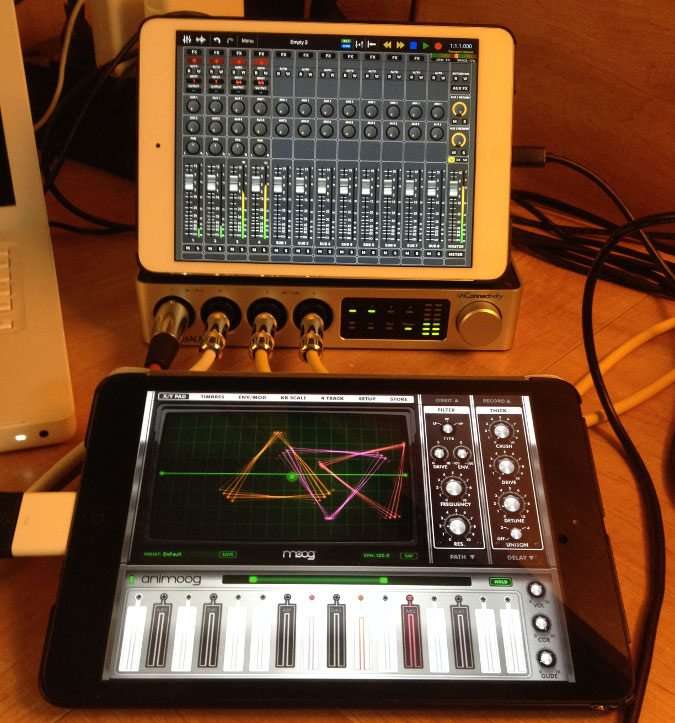 Conclusion
I love the dedication that iConnectivity have had to producing audio and MIDI interfaces that still hold a unique place in the audio industry. No other interfaces out there allow one to connect together multiple devices so easily. With the iOS 9.3 release, and now also the latest update to El Capitan, Apple have allowed those of us who use iConnectivity devices to let out that held-in breath about how things were going to proceed that we’ve been keeping in since iOS 9 was first released. 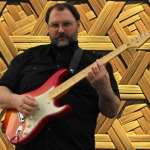 I’ve been a musician ever since I can remember. First a pianist, then a guitarist and singer, latterly a synthesist and bassist as well.
I founded an indie label, MusicInclusive LLC (follow it on Facebook, Twitter and find some experimental tracks – many produced entirely on an iPad – on Soundcloud) and formed Interplekt – my one-man “band” – as a personal creative outlet (for more details, check it out on Facebook and Twitter).
You can also find some of my instructional music-related videos on YouTube  – mostly to do with using iPads in music production.

Drop by and say hello!