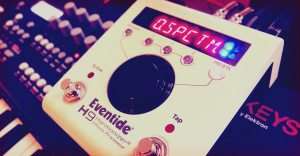 Shortly after we gave the Eventide H9 one of our 2015 Sonic Joy awards, we heard about a new upcoming algorithm, SpaceTime.

Well, today Eventide announced its availability and we immediately took it for a spin, using it in combination with the H9 iPad app.

SpaceTime features, at a glance:

SpaceTime is an interesting new chapter for the H9 platform. “SpaceTime breaks new ground for Eventide because it’s the first time we’ve combined reverb, delay and modulation in one algorithm with flexible routing of the effects,” said Nalia Sanchez, Director of Marketing Communications for Eventide. “We’re calling it our first ‘modular’ algorithm since, while many of our algorithms contain more than one effect, SpaceTime is the first that allows you to change how they interact with each other as well as how they behave individually. It’s like having three stompboxes in one.“

SpaceTime comes loaded with 23 Presets and is available now as a $20 in-app purchase in H9 Control for H9 standard and H9 Core owners and free for H9 Max owners.

Simply update your H9 Control software to try out the new algorithm. In the meantime, we did a quick test with one of our synths. More later about this…