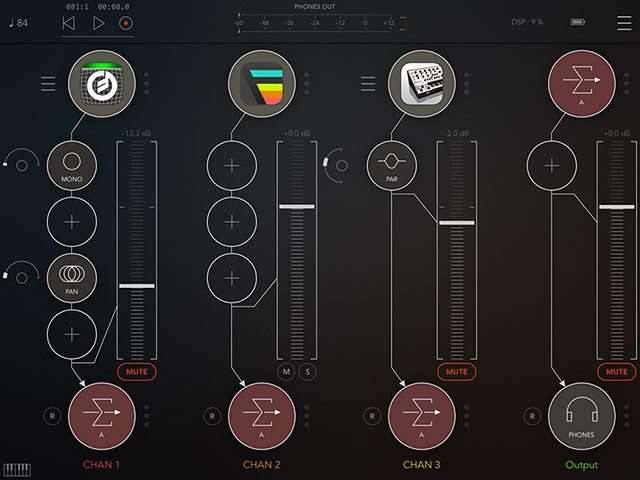 iOS music takes a big step into new territory today with the release of Kymatica’s new app AUM. That little “M” for “mixer” represents an entire segment of iOS music workflow that is just beginning to see progress and development.

MiMix was the only app in that space before now. Today AUM blows live audio mixing wide open for iOS musicians. I had an advanced day to preview version 1.0 and I’m thoroughly impressed by what I see as well as eager to explore more.

AUM executes live mixing with surprising ease, with a load of extensive features under the hood, quick snappy response on the screen and audio. Perhaps most impressive is how AUM manages to do all this with a minimal overhead of CPU requirement.

A Mixer For Live iOS Performances?
Current state of affairs – How did they do it? We have seen successful iOS musicians accomplish this, playing, recording and mixing live tracks on the fly. But it is a novelty, and it often just leaves us bewildered with the complexity and routing.

We have Audiobus with its multiple lanes of audio and Mimix which works within Audiobus to add some essential routing and MIDI control to your Audiobus lanes. There are musicians like Ani who create live MIDI based EDM tracks all inside NanoStudio. Others are Loopy HD experts, like Fleksi, who makes groovy, guitar/synth tunes inside complex Audiobus fx routes based around on-the-fly audio loops.

And there are the mad scientists who roll their own systems, like Otem Rellik who used MobMuPlat to program a PureData looper which is complete with built-in effects for his edgy experimental performances.

I’ve heard that others use Auria Pro, ModStep or MultiTrackStudio to similar effect. Confused yet? I am. These unique musicians brute forced their creativity upon iOS to make some stunningly complex live mixes and performances. …while the rest of us sit here wondering how they accomplished all that inside their blipping, glowing little slice of iOS glass and silicon.

Routing Anything to Anywhere
AUM takes that complex live mixing workflow and makes it instantly more accessible for all of us in a beautifully simple interface.

In a nutshell, AUM will “route anything to anywhere” according to Kymatica’s website. From what I see, I don’t think that is an exaggeration.

AUM can interact with any Audiobus/ IAA/ AudioUnit iOS app to send any audio, route it thru any chain of effects, and sent to any destination. This is no small task but AUM appears to accomplish this very well, while allowing a vast range of options, from very simple to silly levels of complexity.

What can AUM actually do for my live mix? There is so much flexibility it would be impossible to include everything. I’ll just highlight what I’ve discovered so far:

Effects Sends – If you work in a DAW, this is an essential part of mixing. AUM gives live iOS musicians that same flexibility in a live workflow.

Audio Processing Nodes
AUM has built-in effects for “stereo processing, filtering, and dynamics” This means that each audio channel in AUM can have multiple instances of these built in effects. 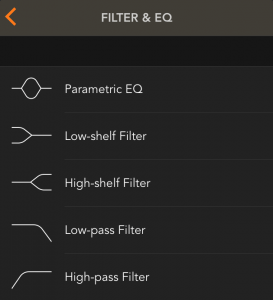 Clean And Intuitive User Interface
This can’t be underestimated. It is clear Kymatica put a lot of effort into executing this well. It responds quick, looks great, and each swipe and tap has a corresponding action and effect that is consistent across the app.

To me, this is a big advantage over the workaround where some musicians are using iOS DAWs for live mixing. The fiddly knobs, the DAW-oriented UI, it just kills my creativity. AUM takes a clean, minimalist approach with big enough icons to adjust live without worrying about bumping the wrong thing. 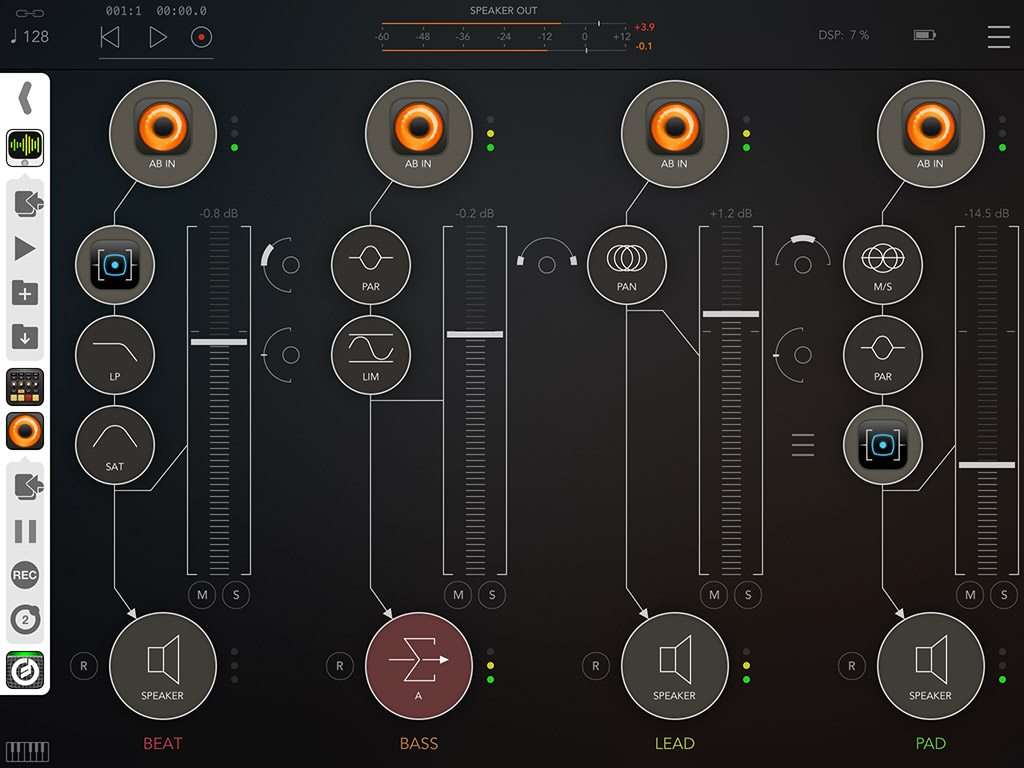 MIDI, MIDI, MIDI (plus Ableton Link)!!!
I get overly excited when an iOS music app comes out with full MIDI learn capabilities. Kymatica feels me deeply and have done just that with AUM. Every audio and bus channel, including each parameter of the built-in effects are MIDI learnable.

MIDI makes me happy. I’m going to route these to my knobs on my MPK49; I’m going to build filter x-y pads in MIDI Designer Pro; it will be bliss. On a practical note, first test shows acceptable response over wifi network MIDI. The visuals jump just a bit, but the actual audio parameters are adjusted smoothly.

The new Ableton Link technology is supported as well, which means you can easily sync everything and play in time with other apps or devices using Ableton Link.

High Quality Audio
This is the first feature in the AppStore list, and without a doubt it was kept as Kymatica’s top priority for AUM. The entire workflow is smooth and clean as could be. Drop in an AUM effect node and audio is processed immediately.

Parameter changes are clean, no crackles. Switch a channel’s destination and its done, no clicks or stuttering. Composers, songwriters and studio producers will be happy to know that it can all be recorded simultaneously into separate stems (up to 32-bit floating point).

Just arm record the track(s) you would like to export, tap the red record button at the top and you’re done. You can then export the audio files straight from AUM via iCloud, Google Drive, Dropbox, etc. or you can use AudioShare. For when the inspiration hits and that masterpiece has to be shared.

Conclusion
I haven’t really scratched the surface of what AUM can do, but I know I’m going to have a heap of fun with this in my live iOS sessions. I can’t wait to see how some of the inspirational iOS musicians incorporate it into their acts.

If you have never performed live with your iOS device, then probably AUM isn’t for you. If you have, you’ll know what I’m talking about, and you will want to check this out, no doubt.

Personally, my DAW skills are sorely underdeveloped. When I try to open up a DAW, my creativity instantly deflates and I poke around making no progress. AUM is just right for me. Just play and tweak as you go. And knowing Kymatica, there will be even more features added along the way. Happy music making in the meantime.

Written by hymnotix – Edited by Fab
hymnotix is an iOS musician. He has just started blogging and occasionally posts his iOS musical experiments on YouTube. You can follow him on Twitter @hymnotix.