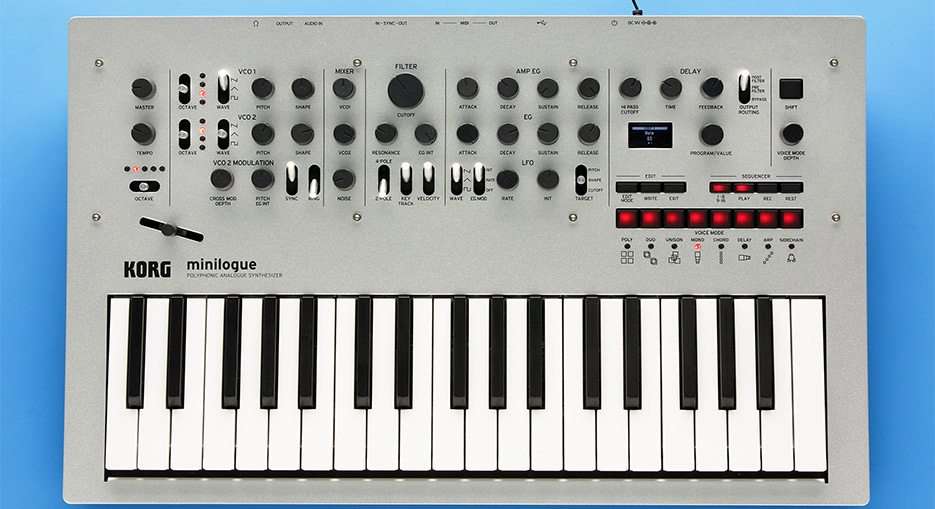 At ANR we couldn’t help but following the recent KORG Minilogue’s release with a rush of excitement.
Now that the dust has settled, we thought it was the right time to ask one of our collaborators to put this new analogue poly synth through its paces and offer a possibly unique perspective on it. Go ahead Henry, we’re all eyes and ears…

Let’s face it, by now you’ve probably read or watched more reviews than you’d ever thought possible about the KORG Minilogue in the short amount of time it has been around. So what makes this one worth continuing?

Well, I’m not going to drone on about technical specs, KORG does a great job of explaining that very clearly on their site complete with an informative video that gives you a general idea of the power and capabilities of this little jewel.

I’m going to give you a rundown (good and bad) of what I think about this analog synth from an artist/producer and overall gear luster’s point of view, as well as an audio demo. It’s a short composition using only sounds, sequences and effects created on the Minilogue (with the exception of minor compression from my DAW Reason 8.3, which I used to record the tracks). 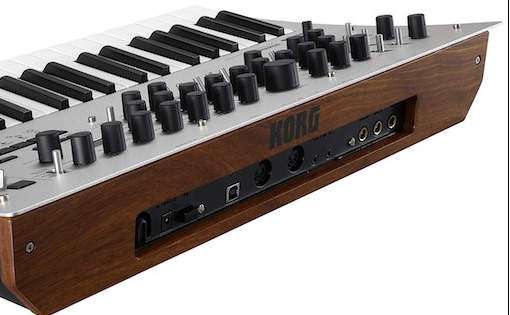 Build Quality & Design
First off, this synth has an overall good build quality: nice wood rear panel, a hard plastic underbelly, and slick aluminum top with clearly labeled knobs which have a nice feel to them. Not beefy like the Moog boards but not small like the Nords- the Minilogue finds a happy medium which probably won’t disappoint most knob twiddlers.

Toggle switches are nice aluminum, identical to those on some of the Novation gear. The pitch bend or assignable slider feels a bit janky to me on the mechanics side of things. However, I like the placement and angle. It’s also very easy to assign, essentially two button pushes and turning the program knob to the desired parameter.

My biggest problem with the build/design are the keys, they’re not mini keys and they’re not full size. They aren’t terrible to play but I do find myself having to look at them more while playing. I would have gladly dug a little deeper into my bank account for bigger keys. 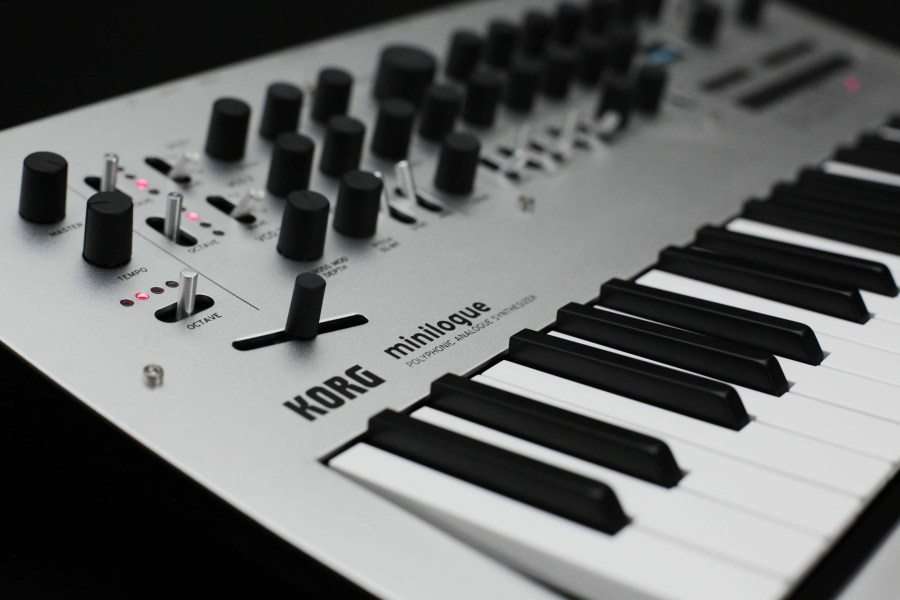 Creating sounds on the Minilogue – A big boy analogue or not?
I was able to get in and start creating quickly without much confusion about the menu and features. I watched KORG’s demo, and read through the quick start and manual once I got over my initial “tear it out of the box and start turning knobs” impulse.

To me, most of the presets it ships with are great starting points for building your own sounds. They did a good job of giving you a basic idea of what it can do and also pointing into some directions you might not have thought about, especially once you start listening and looking at what they do with the sequencer.

Some reviews have mentioned that you’re not getting big boy analog synth sounds with this board- I’m not sure I completely agree with what that might imply. I made the audio demo to go along with this so you can hear how it stands on its own in composition form, as well as if it were paired with a more expensive or feature-heavy piece.

Making a short demo song with the Minilogue
As you know, the Minilogue is 4 voice polyphonic, which was its biggest selling point for me (along with price). It has several voice modes: poly, duo, unison, mono, chord, delay, arp, sidechain. I only use poly, unison, mono, and sidechain in my review.

I wanted to dive into the arpeggiator but found it a bit lacking, and I wasn’t able to find more than a very brief description from KORG’s site which left me thinking it really doesn’t do anything special.

I couldn’t figure out how to program custom patterns on it. I only used 4 sounds so as not to clutter up the demo too much- that way you’re able to hear what each track is doing. In the next section you’ll find a track-by-track description of this demo song.

Track by track
Track 1 – Lead sequence
For my first track which is sort of a lead arpeggiated type sequence, it was in poly mode started from preset 33. I did minimal manipulation to the sound, and spent only about 5 minutes tweaking it. The sequence is a combo of single notes and chords using the rest and tie function. This sequence sounds like the type of arpeggiated pattern you could create and transpose as an arpeggiation on, for example, the Moog sub37 or Novation Bass Station 2.

I created the sequence then recorded the filter tweaks and delay feedback/hi pass changes in real-time to give you an idea of what they can do. There’s no motion sequencing on this track. You hear this one from the very start along with the bass sequence.

Track 2 – Ambient chords
For my second track I started with preset 34, again with only minimal tweaking. I like this preset from its starting point, as it has a really nostalgic Boards of Canada vibe right out of the gate. Again this sound was in poly mode and primarily chords. I used the tie function on this sequence pretty heavily- I also made use of the motion sequencing capabilities for the sync toggle switch and ring modulation toggle switch.

You can notice those automations around the 2-minute mark where this sound takes center stage. This sound is brought in subtly starting at the eighth bar. I also recorded the filter sweeps and delay effects in real time on this one. You’ll notice towards the end of the song I mix this sound out briefly, while saturating the delay feedback on track 1.

I then mix it back in fully saturated with delay feedback while using track one’s feedback and hi pass knobs to blend out and let track 2 come back to the front. I love the delay effect on this synth.

Track 3: THE BASS!
Started from preset 50. Again, minimal tweaking because these sounds are all great starting points, and the Minilogue allows you to pretty much get where you want quickly with its layout. I was skeptical of how fat the bass would be on this synth at first, but this sound as you hear right from the start of the song is really fat and able to fill the low end nicely. I used the rest function on this sequence and motion sequenced the filter cutoff.

I also manually switched it from mono mode to unison towards the end of the song where all the delay feedback is happening with the first two sounds, in order to give the bass more depth in this section (2:09)

Track 4: The drums.
Started from preset 99 with minimal changes to the sound overall. I did most of the sculpting for this sound/sequence via motion sequencing using the noise level, cutoff, LFO target and delay feedback.

These motion changes are what make this sound actually sound like different sounds, the kick and snare with different effects on each. I also recorded the pitch bend changes, which you can hear starting at :25 seconds in. This sound was in sidechain mode for the voicing.

Final notes
I did very minimal processing on these individual track/sounds in my DAW, light compression on each track and then master compression on the stereo buss using Reason’s built in (SSL emulation) compressors for both. I wanted to leave it relatively raw so you have an idea of what the Minilogue can do pre-gloss.
There are a lot more interesting features the Minilogue has that I haven’t really touched on, mainly because I didn’t want to throw things in just for the sake of showing them off.

One thing I didn’t mention early on, the demo is at 100bpm with midi clock sent from Reason and the transport automatically synced with the sequencer on the Minilogue. Sequences recorded at 24bit 48khz through Lynx Aurora 16 converters.

Hopefully, this review and this demo will help give you a different perspective of the KORG Minilogue capabilities if you’re on the fence about it. For me, this synth is definitely a keeper. One I’ll enjoy using in the studio and for live purposes, maybe slaved to a controller/synth with larger keys.

Where to buy?
Support ANR buying the KORG Minilogue through one of our partners. That’s the best way to attract good karma!