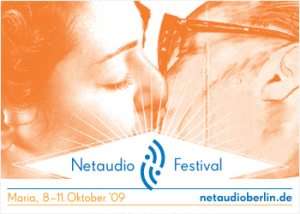 This time it’s the Netaudio Festival 2009, in Berlin. Here’s what the press release says, anyway we’ll try to cover the event with further news and reportage.

“From the 8th to the 11th of October 2009, Netaudio Berlin will be gathering the international netaudio community for a four-day music and conference festival in Berlin, under the title “East meets West”. 2009 will mark the 20th anniversary of the fall of the Iron Curtain. We recall pictures of hands reaching out to pull people from both sides up onto the Berlin wall. The event will take place at Maria, a venue situated immediately on the former Berlin ‘death strip’ once dividing the city and the world into eastern and western hemispheres.
In recent years a netaudio landscape has emerged in the countries of Eastern Europe. Speakers, artists and netlabel managers from Eastern and Western Europe as well as from the USA are invited to ﬁ nd out more about the needs and possibilities, challenges and chances of netaudio under the various cultural frameworks and to discuss new opportunities for networking and collaboration across borders and cultures.”

Tickets are already on sale, please check the official site for the full events’ list.
The list is huge: more than 80 artists, bands or musical projects during the night hours. During the daytime there will be approximately 24 or more workshops, lectures, movies, discussions, showcases – and additionally a lot more other things. Sounds promising, ah?