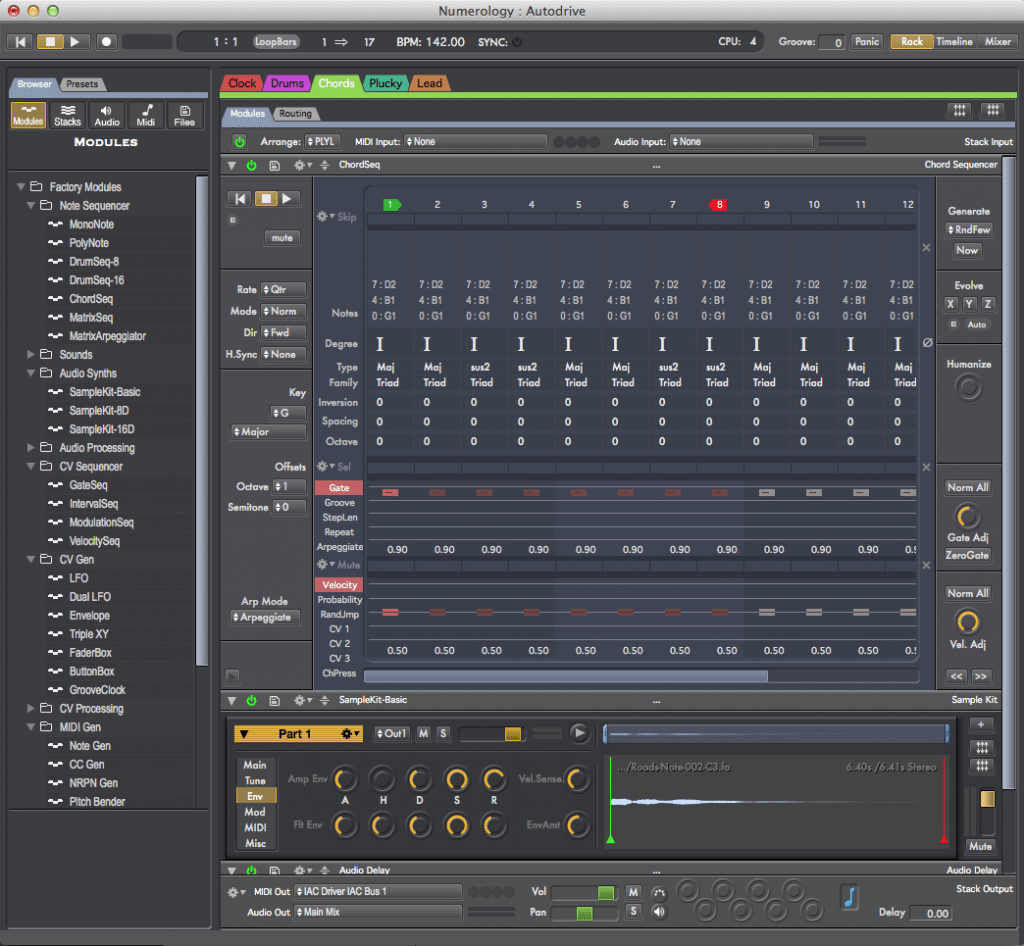 Probably best described as ‘The Mother of All Step Sequencers’, Five12’s Numerology has been developed since 2004 by James Coker.

This extremely powerful sequencer, only available for Mac and now at version 4.2, is actively developed and supported through the Five12 forum and available in two versions: SE and Pro.

In a nutshell
Numerology is a modular MIDI and CV step-sequencing environment for Mac OS X .

Both versions include a standalone version which can host Audio Units only, and a plugin VST/AU version which you can drop into the DAW of your choice. The plugin version does not host plugins.

OK, let’s get started….
Install Five12 Numerology on your Mac. Yes, I repeat, it is Mac only and NO there is no plan for a Windows version.
Now, all you Windows users may wish to turn away now, but I suggest you hang in there. You may decide to turn to the ‘Mac Side’. Or not….

Once installed open Numerology. You can play through the demos if you like, but they can be an offputting as they present a rather complex view of what is, essentially, a very simple concept.
Click > new empty project and you get this… 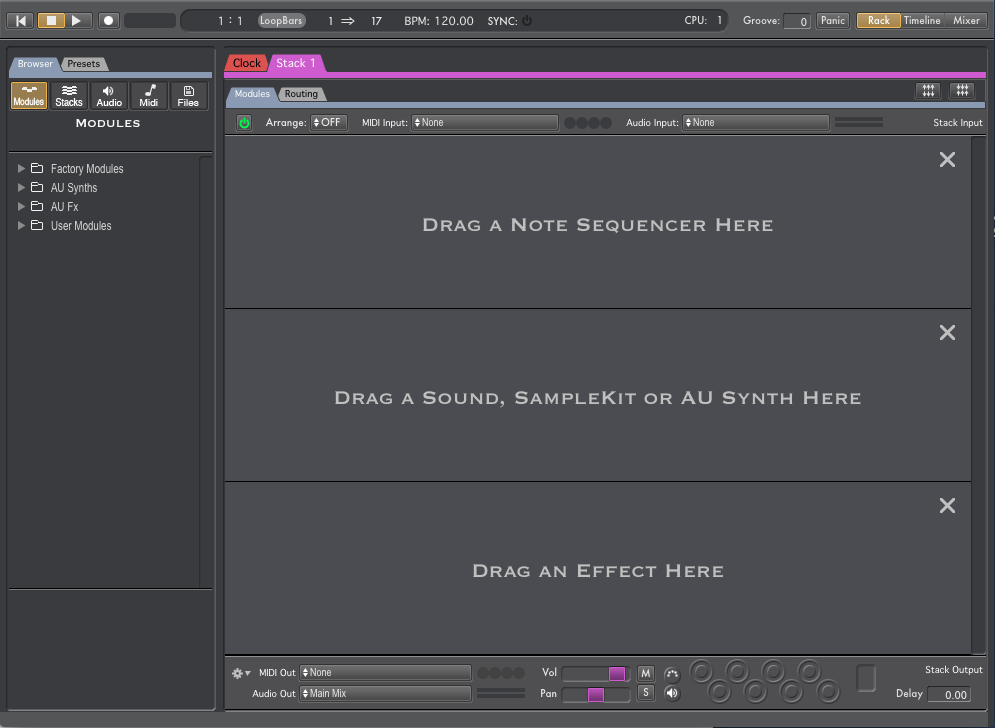 So cool it even tells you what to do… so do it, pick a Note Sequencer… 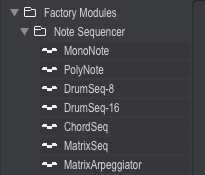 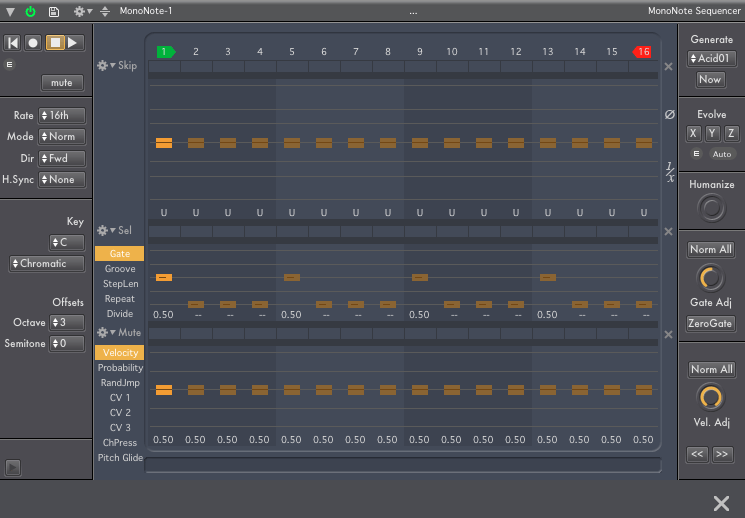 There’s a lot going on there but don’t worry, keep going, drag a synth in. Being a Mac software, Numerology knows where your Audio Units are, and, unfortunately, Numerology doesn’t do VST.

I dropped U-He’s Podolski in. Next, and here’s the good bit, lookee here:

All the Note Sequencers have these in one form or another to get the creative juices going, and they are relevant to sequencer type, so select one and click ‘Now’ and start the transport. That’s it for the basic mono sequencing thing.

Except, of course, it isn’t. So we’ll have a quick look at functions common to all Note Sequencers:

– the ‘Generate’ section, as we’ve seen
– the ‘Evolve’ section – OMG why doesn’t everything have this? – which allows you to set the boundaries of a very clever auto-evolve algorithm 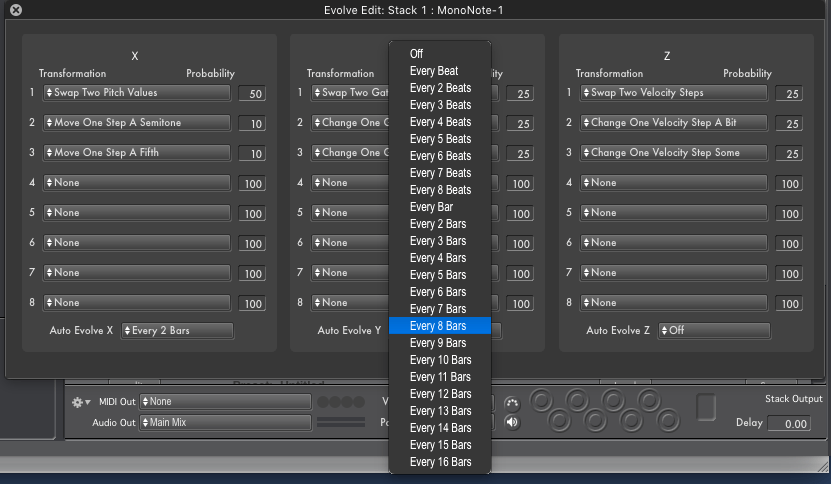 All MIDI and CV sequencers can be drawn across in one sweep. No fiddling about clicking on each step which can be a drone.
All the usual pitch, scale, tempo, direction, sequence and step duration, probability, velocity and other stuff is present and correct – many with its own dedicated sequencer track.

Here is the really good bit – right clicking on most objects brings up a menu to die for.

What this means is that most thing can have their own modulation source: MIDI, OSC (Pro version only) or any one of these –

You can combine sequencers and route them via the routing page which is reminiscent of the back of Propellerheads’ Reason, so you can have a MonoNote and a ChordSeq both sending their sequences to a single instrument, perform complex parallel routing setups and… and…. and….. whatever step sequencing you want to do Numerology will probably do it. 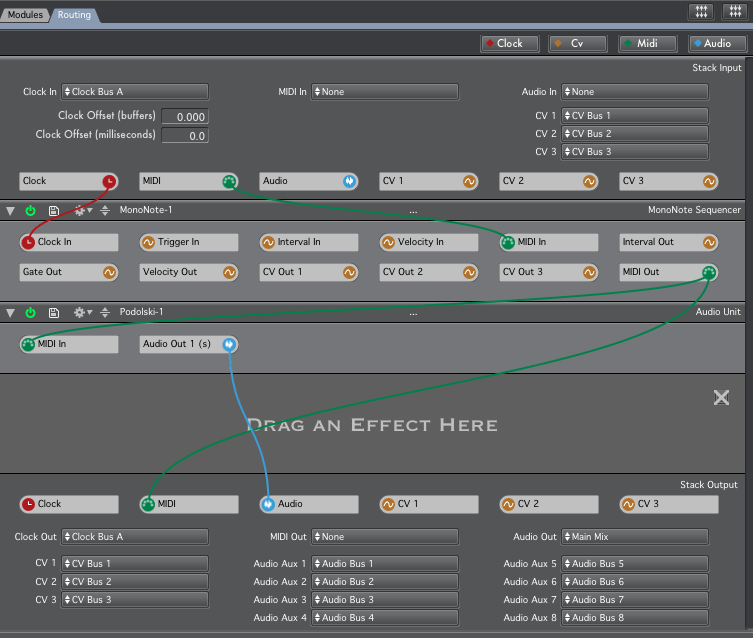 That just about covers the basic sequencing. Each of the factory Note Sequencers has its own specialisms. The DrumSeq’s have an individual track for each drum. Sadly DrumSeq does not offer control over individual track lengths, for polyrhythms and stuff, but it is straightforward to roll your own polyrhythmic sequencers.

The chord sequencer has a comprehensive set of tools for designing any chord progression you could wish for and all the others are equally fit for purpose.

On top of these, you get a comprehensive collection of
CV generators – faders, buttons, x/y controls as well as LFOs and envelope generators
CV sequencers – gate, interval, mod and velocity sequencers
CV processors – gate gens, CV delays and modifiers of various types, clock and sample&hold functions and more besides – many of these are only available in the Pro version
MIDI generators and processors – CC generators, Program Change (a wonderful thing), pitch bending and quantizing plus note and CC filtering
Some basic effects – reverb, frequency shifter, delays and so on – all basic but good.
Numerology also provides two forms of basic sampler, one for percussion and one for everything else.

While much improved over the previous versions, it is a shame that these units cannot reference a folder or table to allow scrolling through samples as in XFer Nerve or modulating sample selection in Reaktor. That said, it is a perfectly serviceable sampler.

So, most of this, apart from the Audio Unit hosting is available in both standalone and plugin versions, but the standalone has more tricks and this is a goodie.

It acts like a DAW similar in principle to Ableton Live or Bitwig Studio in that it can have multiple tracks – called stacks in Numerology –  and has a preset system not dissimilar to clips in its mixer view. 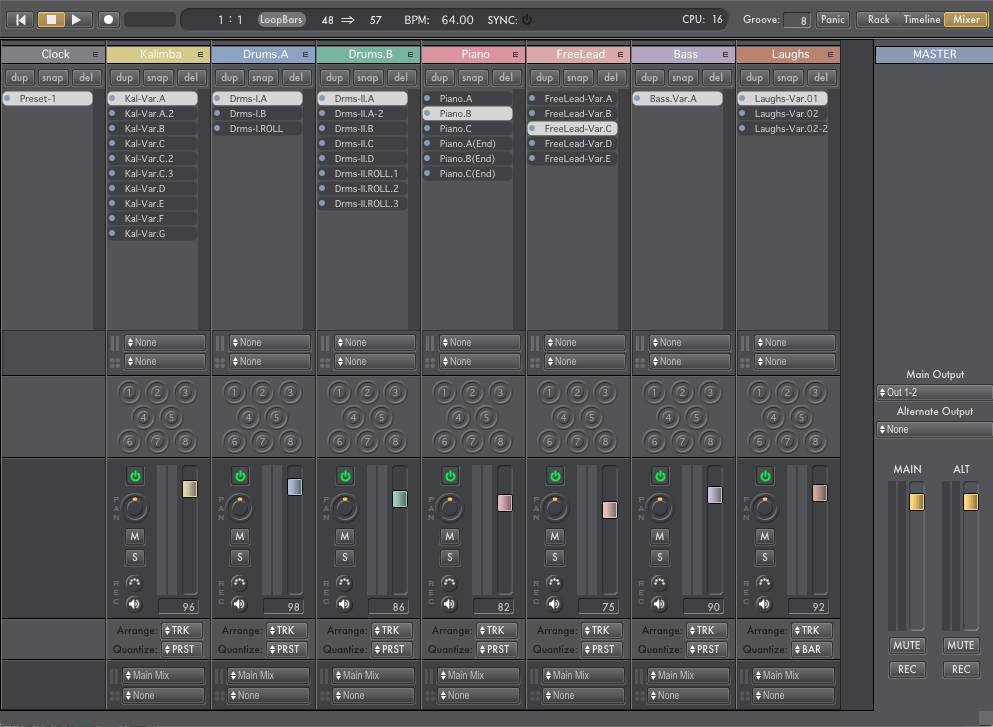 The presets can be quantized, to make sure they come in on the beat or bar or finish playing before the next comes in. The mixer view also gives you a clock stack so you can set up tempo changes, as well as all the usual mixer features.

There is also a timeline view if you feel like arranging stuff in a more permanent manner.

Bear in mind that each preset is a MIDI/CV preset, so samples cannot be changed by preset, which would be nice.

What’s the difference between SE and Pro?

From the website:
Numerology comes in two variants, a Standard Edition for anyone that wants an economical step sequencing addition to their studio, and a Pro version with advanced features for users looking to make Numerology a cornerstone of their compositional workflow. The Pro version includes these extra features:

If you are primarily interested in using Numerology as a MIDI step sequencer, then the SE version has everything you need. If on the other hand, you like to use CV-based modules to build customized sequencing setups, or plan to host Audio Unit plugins with multiple outputs, or use OSC, then go for the Pro version.

V.4, Grid controllers and creative modulation
In addition to various modernization and usability improvements, Numerology 4.0 adds several new features that expand its capabilities in two areas central to its workflow: hardware control & modulation.
If you use a Novation Launchpad or other grid controllers (like Ableton Push, Livid OHM RBG, etc.) you’ll be happy to know that one of the most interesting things about Numerology is its extensive mapping.

Check out this extensive tutorial video:

Numerology 4’s expanded support for hardware controllers also includes new options for transport and mixing oriented controllers, and improved OSC support in Numerology Pro. With these additions, users can easily configure a hardware controller setup that allows them to spend as much time away from the computer as they want.

Numerology is also an excellent choice for creative modulations:

Is it worth it?
Undoubtedly yes. Once the learning curve was traversed I found Numerology indispensable in the studio. I use it in my DAW for driving slicers and drums and I believe it would be an excellent live program.
Is the upgrade worth it? Not at first unless you’re running a modular rig, but… if you get the step sequencing bug, how can you resist?