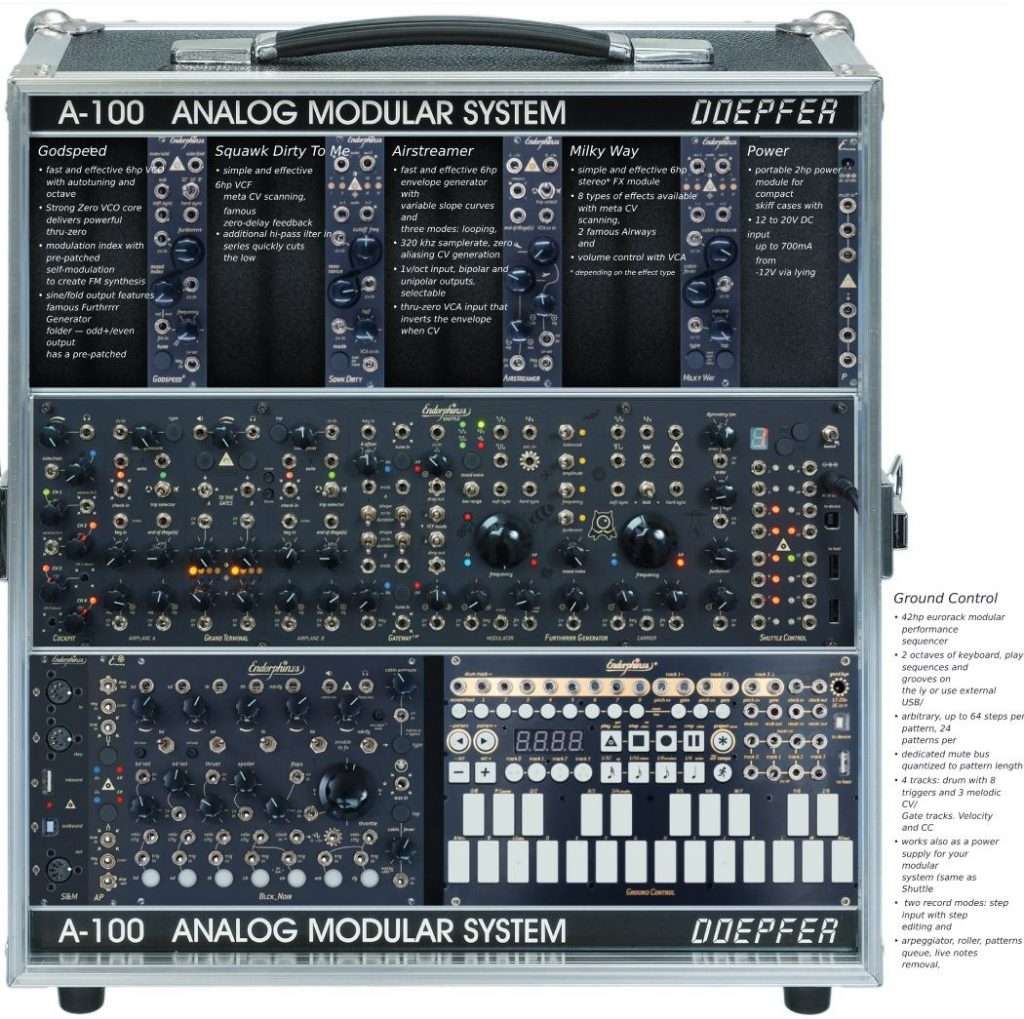 Starting with the smallest 2 hp Power (a first in the eurorack world!), following with a line of neat 6 hp modules named Godspeed+ (VCO with Autotuner), Squawk Dirty To Me (dual/stereo VCF), Milky Way (effects with VCA), Airstreamer (envelope with attenuverter) and finishing off with a groundbreaking 42 hp live performance drum and melodic sequencer called Ground Control.

Furthermore, there is an expanded version of Shuttle Sides to mount two rows of modules. Endorphin.es calls the two-row-system „Modular Shuttle Workstation“. It will contain a Shuttle System in the upper row and a Blck_Noir and a Ground Control module in the bottom row. The 12 hp space left in the lower row is reserved for some secret modules that will be available in autumn when the Modular Shuttle Workstation will be ready to ship. For Shuttle owners it is of course possible to expand an existing System by mounting the new sides and adding a second row. The design of the new Shuttle Sides allow the two rows of modules to be closed with two transparent Shuttle Covers.

Availability of the small modules starts in summer 2019 while the sequencer will be available in autumn 2019. The price for the small modules varies from € 120 for Power, € 165 for envelope and € 199 incl. VAT for filters and effects, while sequencer is supposed to cost around € 550 incl. VAT.

Fresh updates also come with new firmwares for Grand Terminal, Blck_Noir and the new module in the Airways line – Milky Way: In the future both effect banks (Airwaves and Darkwaves) are merged in one firmware, will be flashed to the modules at once and may be switched on the fly.

Squawk Dirty To Me

*depending on the effect type

• 2 octave keyboard, play sequences and grooves on the fly or use external USB/MIDI gear or DAW integration or control external MIDI gear

• arbitrary, up to 64 steps per pattern, 24 patterns per track – all contained in up to 24 projects