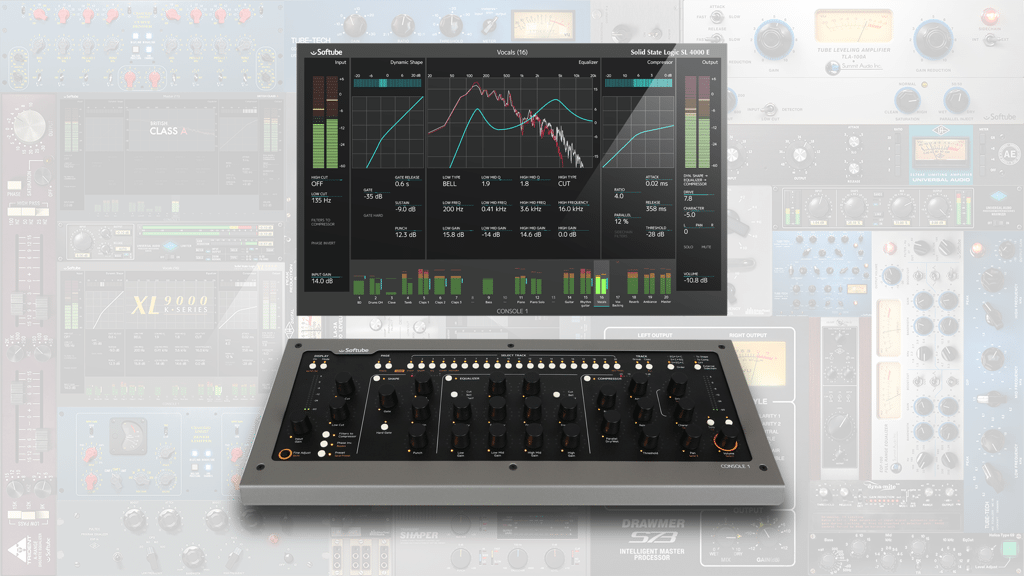 Originally released in 2014, Softube Console 1 quickly earned a large and dedicated following, receiving prestigious awards and rave reviews in the pro audio press (including ours, see our Softube Console 1 review).
With its tightly integrated hardware and software, and the included emulation of a Solid State Logic SL 4000 E console, Console 1 offered the best of the digital and analog worlds in a compact system.

Firstly, the new software — also available to owners of the first-generation Console 1 — makes it possible to use Console 1 with selected UAD Powered Plug-Ins from Universal Audio. There are now over 60 world-class plug-ins that can be used from within the Console 1 system, including plug-ins based on units from Chandler Limited, Fairchild, Teletronix, Tube-Tech, Abbey Road Studios, and many more. The plug-ins are pre-mapped and easily selectable from the Console 1 software, so no MIDI mapping is necessary.

Secondly, the success of Console 1 has made it possible to make efficiencies in production, resulting in an MSRP drop from $849 to $499. The hardware has the same build quality as the original units, with some minor layout changes such as more visible LED markers.
All of these changes come in addition to the recently released software update, which added DAW control functions for Presonus Studio One and Cakewalk SONAR.

The new Console 1 Mk II units, and the software update with the UAD Powered Plug-Ins compatibility, will be available in Spring 2017.
Upon release, existing Console 1 owners can download the updated software from www.softube.com and start using it with their Console 1-ready DAWs or plug-ins.

One more thing! If you happen to be visiting NAMM in Anaheim, California this weekend (January 19-22), drop by Softube’s NAMM booth, #6911 in Hall A for a personal demonstration and more information. Tell them ANR says hi! 🙂

Don’t miss our next updates, giveaways, and special deals. Sign up for our newsletter here….
[sibwp_form id=3]