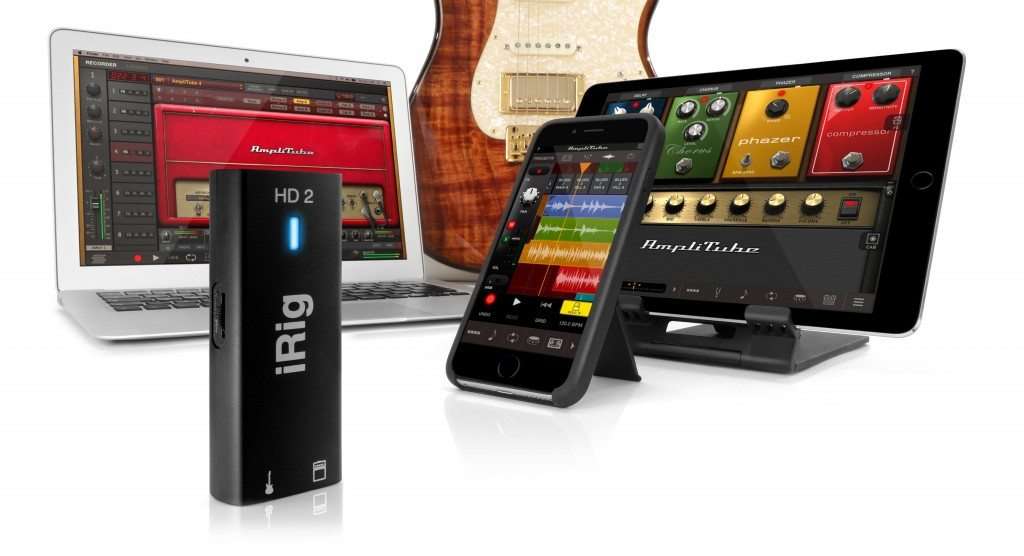 IK Multimedia got in touch with us to announce iRig HD 2 – the sequel to the best-selling, wildly popular iRig HD digital guitar interface for iPhone, iPad, Mac & PC. According to the company, “the iRig HD 2 raises the bar for guitarists and bassists to play, perform and record with their device at a higher level either while on the go or in their studio”.

Amp Out with dual mode switch
iRig HD 2 also sports a new Amp Out jack that lets players use their iPhone, iPad, Mac or PC live on stage with a traditional guitar amplifier without the need for special adapters – a standard 1/4″ instrument cable is all that is needed to make the connection. This output is controlled by a new FX/Thru switch that lets users choose what type of signal is sent – FX sends the processed signal coming from the device, while Thru sends an unprocessed direct signal for using a tuner or in-line recording of the dry signal. iRig HD 2 also comes with a mic stand mounting bracket and Velcro® strip for convenient attachment to a mic stand on stage for live performance.

Full AmpliTube included
iRig HD 2 owners also receive free downloads of the full versions of the ultimate guitar and bass tone and recording studio – AmpliTube 4 for Mac/PC (a $/€149.99 value) and AmpliTube for iPhone and iPad (a $/€19.99 value for each). With AmpliTube, guitar and bass players will have access to a whole new universe of gear: stompboxes, amps, cabinets, microphones, speakers, rack effects and more, all on their computer or mobile device. All versions of AmpliTube are expandable with gear from some of the top manufacturers in the industry like Fender®, Orange®, MESA/Boogie®, Ampeg®, T-Rex®, Fulltone®, Seymour Duncan® and more.

Pricing and availability
iRig HD 2 is available now for pre-order from IK Retailers worldwide or from the online IK store for only $/€99.99 (all prices listed are excluding taxes). iRig HD 2 will be available and shipping late September, 2016.

Once players register their iRig HD 2, they can download the full version of AmpliTube 4 for Mac/PC from their user area on the IK web site. Users should install the Free versions of AmpliTube for iPhone and iPad from the App Store, and once the iRig HD 2 is registered and plugged in, they can “restore purchases” and the full version features of both will be available.

Accessories
For long playing sessions, iRig HD 2 is compatible with iRig PowerBridge ($/€ 69.99) which keeps the iOS device charged while playing, as well as other IK accessories to complete a live guitar set up like the iRig BlueBoard wireless pedal board ($/€99.99), and the iKlip range of mic stand holders for iPhone and iPad (starting at $/€ 39.99).