Myriad has been created by Audiofile (or Audiofile Engineering, as they used to be called in the past), based in Minneapolis. Myriad is heralded as the ultimate audio batch file processor. The software helps to speed up the library process when it comes to dealing with large amounts of audio files.

Myriad is simple and clearly laid out. You load any audio files that you want to use, most of the native file formats are covered, including FLAC, CAF, AAC amongst all the regulars. You can load them all at once, or individually, by selecting from menus, or drag and drop. They show up on the left-hand side of the window.

Once you have the files loaded into the software, you can drag and drop various automations from the centre column into a workflow situated in the right third of the GUI. You can then apply a ‘myriad’ of different actions onto the audio files that might take forever doing separately, but you can run the workflow out much faster than you would be able to by yourself. 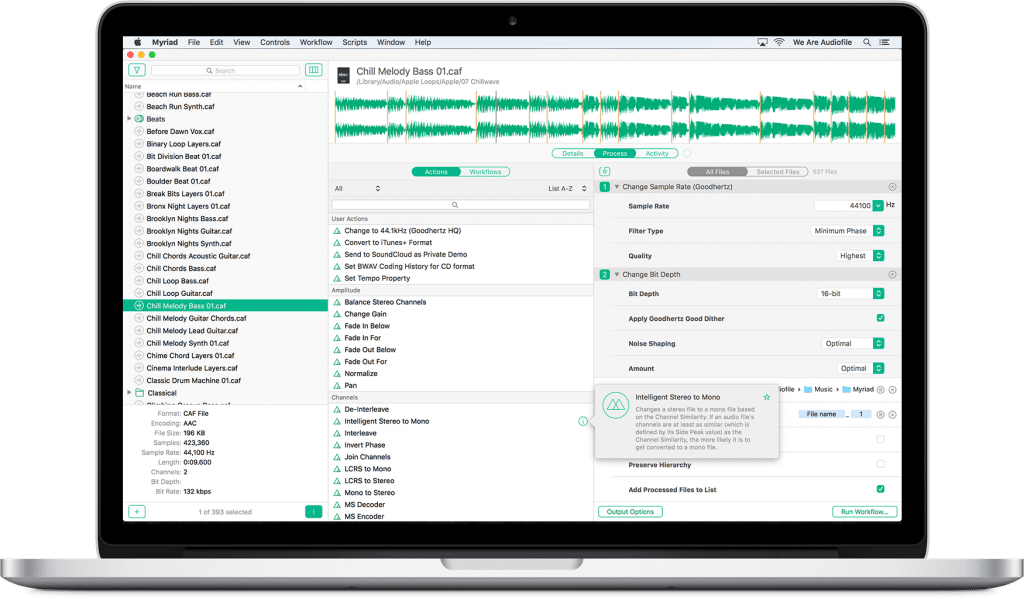 The actions you can perform on the files cover many of the basics that you’d potentially need for batch work. There are hundreds of actions, including audio alterations, for example: Pan, Interleave, De-interleave, Normalise, extend, trim beginning and end, fades, gain change, Stereo to Mono, to name a few. A couple of the audio actions you can perform are sample rate conversion and dithering. Audiofile Engineering have enlisted the help of the estimable Goodhertz company, and you’ll find that the converter and dither in Myriad are better quality than you’ll get on your DAW. You can convert from anything to anything (there are 13 different audio file types listed) So if you want to convert your CD collection to FLAC or ALAC to save shed loads of space, this is the software to do it on!

There are some processing actions you can use to change the sound of the file – from pitch, speed, and reverse processing. If you’re wanting to use a plugin to process a vast amount of sound the exact same way, you could set up a workflow to change gain to a set amount, to ensure levels are the same for each sound file, then process through a plugin of your choice. You select the plugin from a drop down menu, and the plugin GUI opens up in a separate window – you make the adjustments you need, and hey presto you can process a large amount of files through that plugin. You can preview the effect the plugin will have, and see the results on the detailed view window: 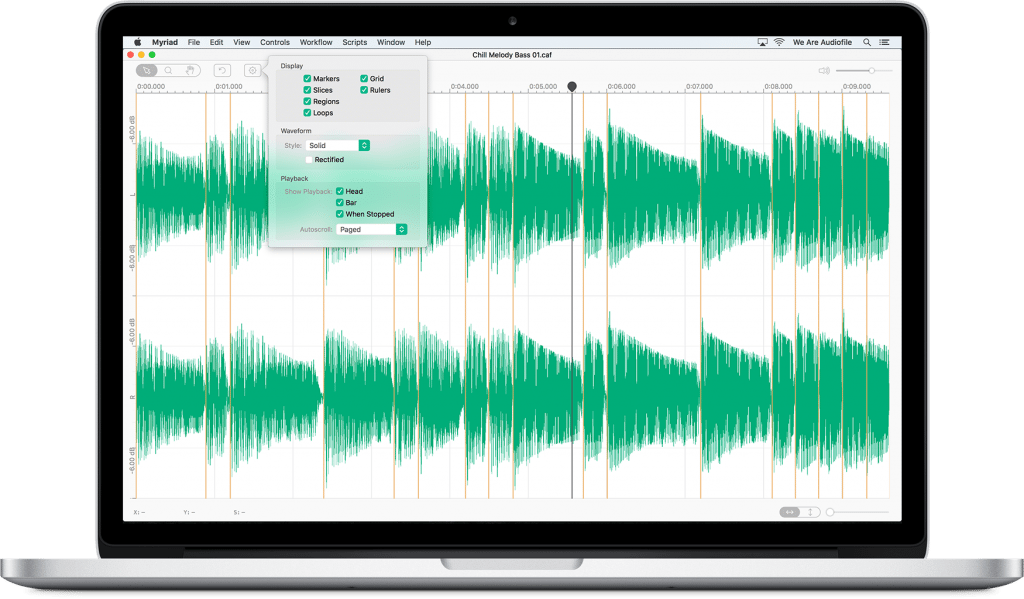 There’s also excellent housekeeping library actions. You can add and upload to Dropbox, iTunes, Protools session, Soundcloud, send via an FTP of your choice., You can label for finder, add metadata properties for iTunes, MP3 or all uncompressed versions. If you’re importing sound design files for example, being able to add certain labels to them as a batch job would save hours and hours of typing in for each file. You can re-name files as you go, although that particular action took a little while to find, as it’s in a separate window.

If you run a particular workflow, of several actions, you can save it as a personal workflow, speeding the process even further. There are a few workflows pre-loaded as presets to give you ideas, such as ‘create 30 second MP3’, or ‘save 44.1kHZ 16bit WAVE, FLAC, and MP3.’

Here’s an extremely helpful video outlining the basics of Myriad:

Conclusion
I very quickly used the software to take 20 pieces of music, edit start and end of track, re-title, convert the sample rate to mp3, add metadata, and upload to my company’s Soundcloud site. It literally took 45 seconds to drag the separate actions into the workflow, and click RUN. Myriad handled everything – and an hour later (courtesy of slow broadband) the files were available, titled and playable on Soundcloud. Brilliant.

Myriad keeps track of everything you do – and if there are any issues with the work being done (clipping, stuff not getting loaded properly, etc.) then it alerts you, so you don’t have to worry. I found this software incredibly useful to use, and I hope they keep developing it: I found myself wanting to adjust the titles (take off the beginning and end of titles) without creating entirely new ones, and it doesn’t seem possible to do that yet. I’d also love to see deeper integration with various DAWs; they have a preset for preparing for ProTools, but it would be good to have that for specific elements of Ableton for example. (converting to loop at a certain tempo). Of course, the software is deep enough that you could set up workflows to do pretty much that with little effort.

Price and compatibility
Myriad costs $79.99 and is compatible with OS X 10.9+. For more information, visit the Audiofile website.