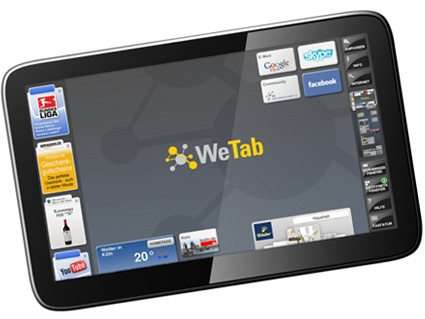 The WeTab (formerly known as WePad), created by the German company Neofonie, is an Intel-based Tablet Pc (based on Linux, Android and Adobe AIR), and one of the many potential iPad competitors that are going to appear on the market in these months.

Well, for sure the WeTab has already got a record: it’s the first touch-screen gizmo whose Managing Director was forced to resign just a few days after the launch (the product is only available through Amazon Germany at the moment)!
WeTab’s MD Helmut Hoffer and his wife have been caught posting fake 5-star reviews of the device on Amazon.de. A German blogger, Richard Gutjahr, has revealed the scoop 2 days ago.

The first (real) reviews are not so positive: weight, display and software issues seem to be the most discussed topics. Probably some of these issues will be fixed in the next software updates, we’ll keep an eye on this.

WeTab is available on Amazon Germany in two different configurations: 16GB and 32GB with 3G (UMTS).