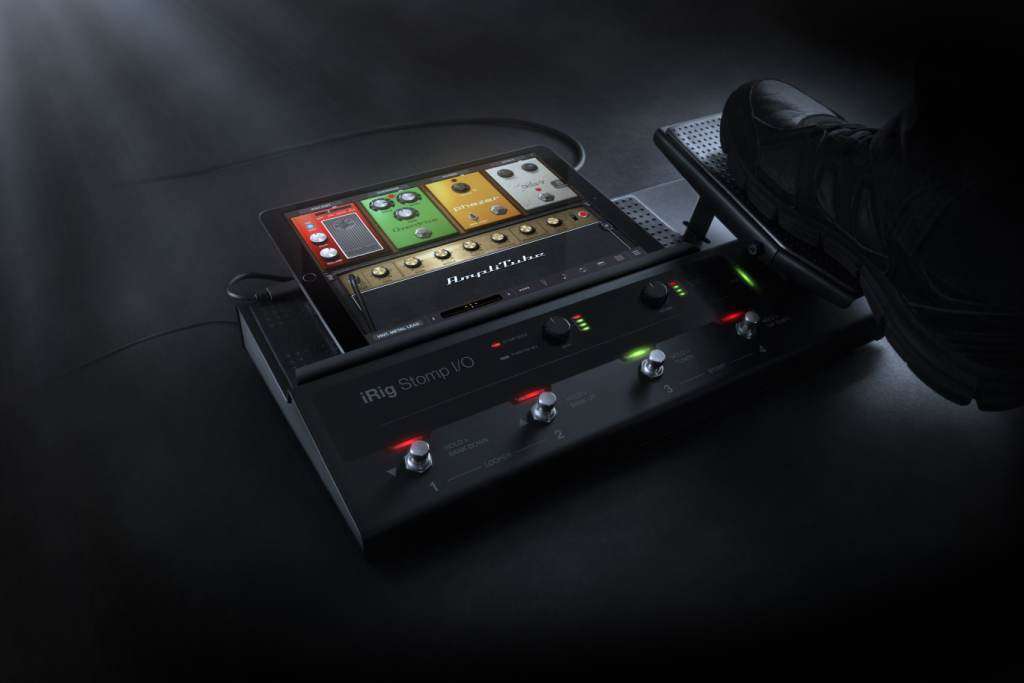 IK Multimedia has just introduced iRig Stomp I/O, an all-new generation of USB pedalboard controller for live and studio use, featuring a built-in audio interface. It is expected to be available in March 2018 and is now open for pre-order.

In the company’s words “iRig Stomp I/O is a sturdy, portable pedalboard controller that has 4 built-in switches along with an expression pedal and features a professional high-definition audio interface with 24-bit audio and up to 96kHz sampling rate, a combo input jack for line, instrument or mic input with phantom power, balanced stereo output and high quality ¼” headphone output ideal for use with the latest Apple® devices like the iPhone® X.”

With its combination ¼”/XLR input, iRig Stomp I/O lets you easily record with a guitar, bass, synth, keyboard or microphone – including studio condenser mics requiring 48V phantom power using its 96kHz/24-bit audio interface on iPhone/iPad, Mac and PC. It has a Class A preamp with gain control and an output level control with VU metering for both input and output levels. The integrated ¼” headphone output allows for monitoring the signal during tracking or when practicing, while the balanced stereo output can be used to send the signal to an amplifier, a mixer, a PA or powered speakers.

At home in the studio or on stage

With its robust metal construction, iRig Stomp I/O features an onboard expression pedal with optical switch and four stomp switches allowing control over effects and presets for hands-free performance. The two ¼” control inputs can connect additional external pedals or switches. To further extend the control possibilities there is a MIDI input and output allowing the unit to operate as a stand-alone controller (even without a host device). 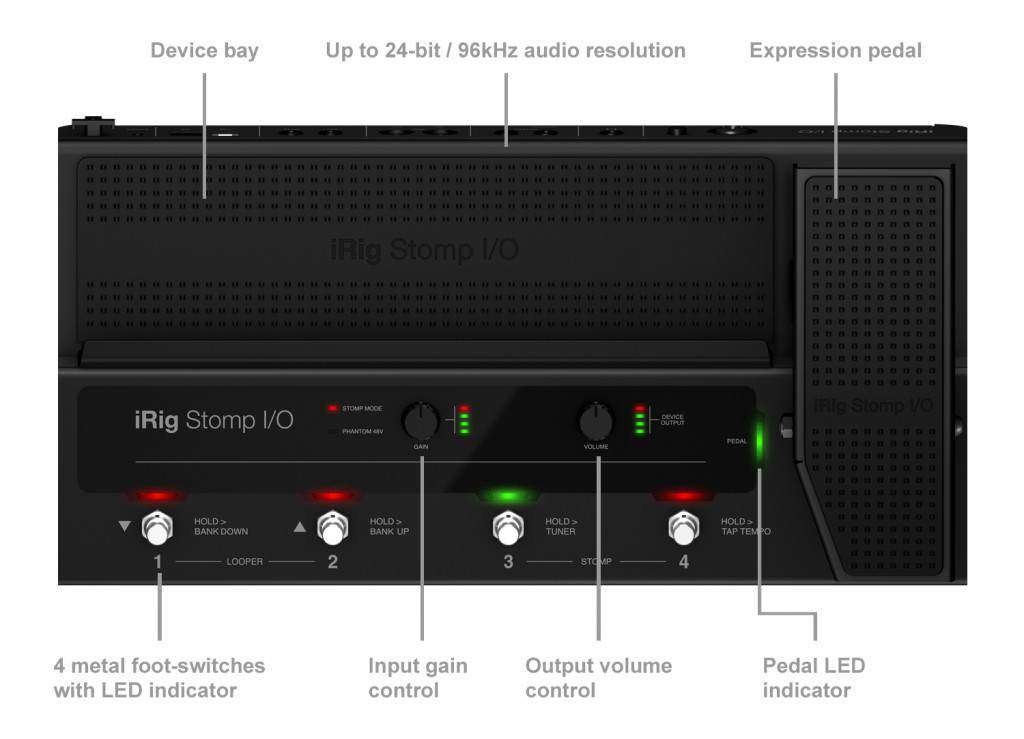 As an MFi certified audio interface, it is designed to work right out of the box with an iPhone or iPad using the included Lightning cable as well as with Mac® and PC via USB. It is the only floor controller to feature a convenient device bay, where you can safely position your iOS device – charging it during use – for an immediate and clear view of the interface along with other tablets like the Microsoft® Surface, taking advantage of the touch screen interface for speed and flexibility in creating and tweaking guitar tones.

With over $/€800 worth of IK software and apps, iRig Stomp I/O puts all the power of the world’s best sounding guitar amp, FX modeling and vocal processing software right at the feet of users with a collection of over 160 gear models for Mac/PC and 70 for iOS. Electric guitarists and bass players can unleash the full power of AmpliTube on Mac/PC as well as on iPhone and iPad, while acoustic guitarists can shape their tone with AmpliTube Acoustic for iOS and singers can get creative with VocaLive and Mic Room. The seamless integration with AmpliTube and VocaLive makes it as easy as plug-and-play to record on multiple devices using IK’s powerful, state-of-the-art, 64-bit software.

Plus, recordings can be taken to the next level on Mac and PC using four select processors from IK’s flagship T-RackS mixing and mastering suite (the White-2A, Black 76 and VC-670 compressors, and the EQP-1A equaliser, for authentic analog studio sound).

iRig Stomp I/O is expected to ship in March 2018 and can be pre-ordered now from the IK Multimedia online store with free shipping and from IK authorized dealers worldwide for the remarkably affordable price of only $/€299.99*.
* All prices excluding taxes