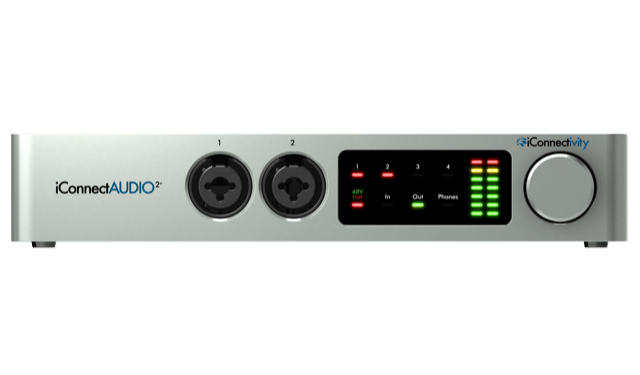 Last year iConnectivity unveiled the iConnectAUDIO4+, a powerful yet affordable Audio (4-in and 4-out) and MIDI interface, popular among iOS and desktop computer users.
Yesterday at NAMM they announced its little brother (or sister?), the iConnectAUDIO2+, a versatile 2-in 6-out Audio & MIDI Interface for musicians and DJs.

For those setups where you don’t really need more than 2 audio inputs (think stage, clubs, etc.), iConnectAUDIO2+ is a flexible, portable AND bus-powered package.

The interface’s most-used functions can be controlled from its touch panel, and iConnectivity’s iConfig software for iOS, MAC, and PC is included for setting up flexible audio and MIDI routing. Our iOS readers will be happy to know that the interface is able to charge an iOS device when used with an optional power supply.

Snapshots are then stored in flash memory on the device.

Price and availability
iConnectAUDIO2+ will be available for purchase Q1 of 2016 with an estimated street price of $199.99 at iConnectivity resellers worldwide.