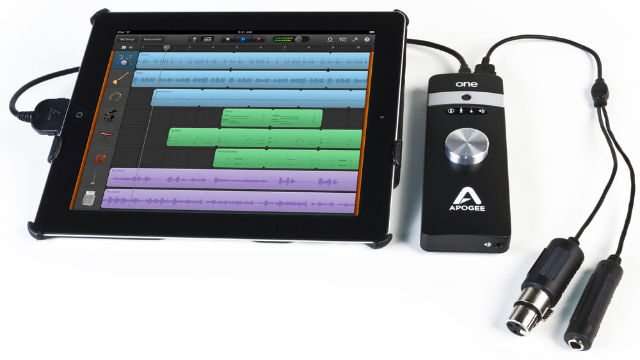 If you are looking for a quality option and don’t need multiple inputs/outputs, Apogee ONE is a great addition to a home studio or to a mobile recording rig.

If you have read our  IK Multimedia iRig Pro review  you already know that we have a thing for tools that make the life of us Mac & iPad users easier. Well, the Apogee ONE is another audio interface for Mac and iPad, born with the idea of portability in mind. Let me concentrate on the look first: the Apogee ONE looks and feels great in your hands – minimal, classy and rugged at the same time, thanks to the die-cast aluminum body and a molded rubber base. It’s light and compact (as tall as the new iPad Air in landscape mode), with one big multi-function knob in the middle that lets you switch between modes and set input and output levels. Usability-wise I’m not enthusiastic about the click-action of the knob (it’s less smooth than you would expect), but it’s something I can live with.

Let me focus on the design first: the Apogee ONE looks and feels great in your hands – minimal, classy and rugged at the same time, thanks to the die-cast aluminum body and a molded rubber base. It’s light and compact (as tall as the new iPad Air in landscape mode), with one big multi-function knob in the middle that lets you switch between modes and set input and output levels. Usability-wise I’m not enthusiastic about the click-action of the knob (it’s less smooth than you would expect), but it’s something I can live with.

The connections are pretty straightforward: power, USB (that doubles as Lightning and 30 Pin connector, thanks to the cables included) and audio input, via breakout cable. This provides a microphone (XLR) and an instrument connector, both quality-looking. But that’s not all when it comes to the inputs. What if your inspiration calls and there’s no mic lying around? Here is where the built-in condenser microphone can come in handy. Thanks to the included mic clip it’s easy to place the interface on any standard microphone stand. There you go, your song (or podcast) is saved! At the bottom of the unit, you’ll find a stereo 1/8” connection for the audio output. 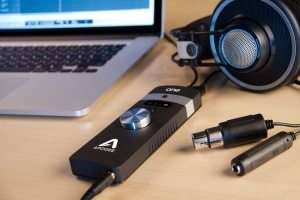 ONE offers up to two simultaneous channels of recording (instrument + built-in or external mic). The quality of the preamps is what you would expect from an Apogee product: plenty of gain (we’ve tested it with both phantom-based and classic condenser mics) and excellent clarity. They call it “second-generation quality” to differentiate it from the 2009 ONE model; well, I couldn’t do a side-by-side test, but you can rest assured that if you nail your performance with the right mic, these preamps will faithfully capture all the details. This means that Apogee ONE gives iPad users a reliable and professional-sounding partner for their recordings, that integrates seamlessly with iOS and its features.

Since we’re focusing on the ONE+iPad set-up, a further note on portability. Apogee ONE requires two AA batteries OR its small powered adapter, but at the same, using the power adapter gives ONE users a welcome perk: the unique possibility of charging the iPad while recording/playing. No more “session interruptus”!
ONE requires the use of the Maestro (free) app. The software is quite intuitive and offers control over all the sound parameters. If more complex visual interfaces (see the powerful but intimidating RME’s Totalmix) give you a headache after 5 seconds, there’s a good chance you’ll appreciate Maestro.

As said, Apogee ONE works also on Mac OS X, and all our comments above apply to the usage with a Mac. Before using ONE on OS X you’ll have to install a driver (that requires a restart of the machine, FYI). Apogee also provides a helpful quick start document, with recommended settings for Logic and Live (Logic allows for a 64ms buffer, against the 128ms of Ableton Live, but given the tight relationship between Apple and Apogee, and Logic’s optimisation, that doesn’t come as a surprise).

Conclusion
After using Apogee ONE for a few weeks (mostly with an iPad, but also with a Mac Mini and a Macbook Air) I’ve come to appreciate its pristine and solid performance, and I’d recommend it to anyone looking for a high quality audio interface for iPad. That said, I would have loved to see a MIDI connector in the breakout cable. It would have made this product a real all-in-ONE, especially for iPad users. It’s true, not everybody needs to use a MIDI keyboard with a tablet, but if you want to enjoy those latest synth apps you just got well, you’ll have to unplug ONE and plug something else into your iPad. Oh well, I guess Apogee wanted to keep the unit in an affordable price range, and who knows, maybe leave this as an extra premium feature for DUET owners.
If you’re looking just for a simple audio interface for your Mac, the market is definitely more crowded. Still, if you don’t need more inputs/outputs or MIDI and you’re looking for an easy to use, compact and very good sounding tool, then the Apogee ONE with its alluring price point should definitely be high on your list.

If you’d like to support ANR you can buy Apogee ONE from Amazon following the links below, and we’ll get some cents out of it. Thanks!

Apogee ONE on Amazon Germany

Apogee ONE on Amazon US

Apogee ONE on Amazon UK