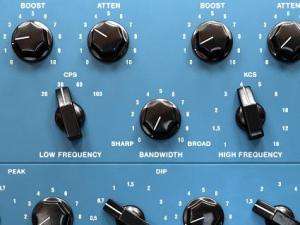 Swedish company Softube have just released a Channel Strip plugin based on emulations of the excellent hardware company Tube-tech. Based 2 hours away from Stockholm, the team of four guys have been focused on creating accurate emulations of hardware gear since 2003, picking up many industry accolades and endorsements along the way. Notable companies they’ve partnered with include Native instruments, Marshall guitar amps, Abbey road studios, and of course Tube-Tech, whose engineers they worked directly with on creating this latest plugin release.

I really enjoyed the PE1C – I found it to be the most flexible and useful of the three plugins. I like to think of it as a ‘sweetener’ eq rather than a surgical tool. You can boost and attenuate the low and high end, including the ‘Pultec trick’ of boosting and attenuating the low end at the same frequency range, which strengthens and tightens the sound, and has been a technique used on many kick drums and basses over the years. I found I could use this EQ on almost all sources to smoothly boost highs, and warm and fatten up the low end. It even worked well on the 2-buss at the end of a mix. Vocals, guitars, bass, drums, all benefitted from it.

In comparison with the UAD pultec plugin, which I use a great deal, I found it to be a little bit subtler in the way it affected the sound. Here’s a comparison of the two EQ’s. The track is dry for a bar, Softube, dry, UAD, and then repeated. The sounds are quite different, even though the settings are identical.

It’s impossible to say whether one’s better than the other, as they’re both emulating slightly different things, but I thought it was interesting to pair them up and hear the difference.

The ME 1B is a new plugin released individually at the same time as the channel strip/bundle plugin. It deals with the frequency range the PE1C doesn’t deal with. As softube say on their website – it ‘is a godsend for getting a modern and focused vocal sound or that extra bite in the guitar track.’ I definitely found this to be true – the EQ focuses on the narrower mid range of 200 to 5khz, and is a little more able to sculpt the sound, find the particular frequency you want to boost or cut, to give more bite, or scoop out the wider midrange, to cut some of the honk out. Whereas the previous EQ works well by itself, I feel this one works best in conjunction with the other, and needs the smooth lift of the highs to complement the work done on the midrange. You can boost the low mids and the high mids, and there is a sweepable cut that covers almost the entire frequency range of the plugin. It proved great for adding bite and brightness. Whereas the PE1C is excellent at creating smooth boosts adding warmth, fatness and glisten to a source, The ME1B is great at cutting, helping a track stand out in a mix, adding some brightness, and cutting out any muddiness or honkiness in a sound source.

CL 1B Opto Compressor
This is based on a compressor that has been used in countless records, and alongside the others is definitely considered a classic in the audio world. The elements that stood out to me immediately were the inclusion of external sidechain capabilities, and the fast attack time (0.5ms). Both are very useful attributes that are not always present on other software compressors – there have been many times when I’ve been frustrated by the lack of external sidechain on the particular compressor I’ve been using. This compressor seemed to work well on all sources. I think that because it’s emulating the hardware faithfully – and as this hardware is tube-based, I found it pretty coloured, and sometimes I felt like it muddied the sound a little. But gentle compression on larger sources, such as room mics, or piano, it sounded brilliant to my ears.

Bypass and Routing Panel
You can bypass any unit to save CPU, and route the EQ before or after the compressor. I loved the routing switch. The order you compress and EQ can have a massive difference on the sound, and it’s great being able to A/B them without having to physically move the plugins around on the DAW. That saved a lot of irritation! With the addition of the Bypass switches, I thought that it made having the separate plugins a bit redundant – why not just load the Channel strip up every time and bypass the modules you’re not using?

Softube have included quite a few videos on their website, which will help anyone find their way around the software more easily, and even give tips on the best order to use the software in.

Conclusion
The EQ was lovely, the midrange EQ even lovelier. The compressor was good, I really loved the external sidechain option – Not many others have these. Not having easy access to the hardware originals, it’s hard to give a direct hard to soft comparison – but I’ll take comfort in the fact that Tube Tech fully endorse these plugins, and Softube worked side by side with engineers at Tube Tech to create the software. If you love the sound of Pultec, or the outboard from Tubetech, then for the cost, you can’t go wrong with the emulation Softube has created. It really does sound excellent.

…If you love the sound of Pultec, or the outboard from Tubetech, then for the cost, you can’t go wrong with the emulation Softube has created…