Newfangled Audio was started by Dan Gillespie after 15 years of writing DSP for Eventide (if you would like to know more about his work with the iconic effect company, check out our interview with Dan Gillespie).
Generate, released a couple of months ago, is Newfangled Audio’s first commercial software synth (a few weeks earlier the company released a free, limited monophonic version, called Pendulate).

I took Generate for a spin, and as you will read below, this is definitely not your average virtual synth (thank God!). Let’s find out more about it…

In The Beginning, There Was Only Chaos

Unlike traditional synthesizers, Generate’s sound engine is based on five chaotic generators, blended with a ‘West Coast’, Buchla-inspired architecture.
In the company’s own words “each of Generate’s five chaotic generators brings out these underlying patterns to create an oscillator that can smoothly fade from a sine wave to total chaos, with an expanse of territory to explore in between. The musical textures created include distortion, harmonics, grunge, static, and noise – all of which can be predictably or unpredictably modulated.”

Confused? Well, I asked the developer, Dan Gillespie, to tell our readers more about the concept behind Generate and how the West Coast influence came into play.

DG: “The idea was to explore how chaos could be used as an oscillator in a musically useful way. Analog oscillators are stable systems represented by differential equations. There’s no actual sawtooth or pulse wave inside the synthesizer being read out; instead, the system iterates through the equations, and a predictable sawtooth comes out the back. It’s stable because you can change the parameters, but they’ll always be a sawtooth or pulse. 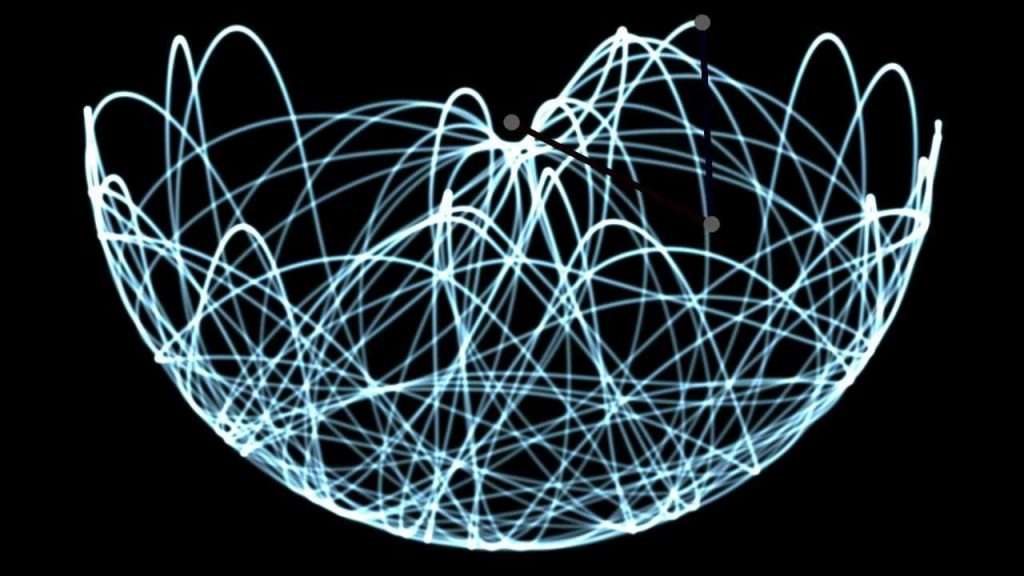 A visual representation of the double pendulum chaos

The chaotic generators in Generate are similarly represented by a set of differential equations, but these ones create an unstable system, which allows you to navigate the area between simple sine-like shapes at one extreme, and gritty noise on the other. Because the system doesn’t have a single stable mode of operation, you can get a wide variety of sounds with just a few parameters. That’s the key behind Generate.

…Then Came Modulation and Effects…

The fun with Generate doesn’t end here. Every parameter in Generate’s voice can be modulated by a combination of two Envelope Generators, two LFOs, a Sample and Hold/Random generator, an 8-step Sequencer, and MIDI and MPE sources, such as Roli’s products, Sensel Morph, Linnstrument, etc.

With up to 493 simultaneous modulation routings from its main page, the innovative modulation user interface allows users to easily and quickly patch any combination of sources to any destination. The Double Pendulum, Wavefolder, and Low Pass Gate modules each have animations to show how each module responds to input, and to modulation.

To top it up, Generate comes with a rich multi-effect section, featuring EQ, Chorus, Delay, Reverb, and Limiter. After all, this is a synth developed by someone who worked on Eventide’s magic boxes for years, so I guess he knows a thing or two about great sounding algorithms, right?

Here below, you can watch an overview of the synth:

I had great fun playing with Generate. In an ocean of boring, more or less similar VST synths, I found its concept and design quite refreshing.
The interface (available in three different colour combinations), albeit not sexy, is inviting and straightforward. The animation (which can be turned off in the settings) might seem gimmicky at first, but can be actually quite helpful, especially when playing dynamic MPE-based patches.

I like how ‘transparent’ the interface is. No hidden menu, no weird things to figure out, everything is basically one click away. Again, simple (and probably boring for some of you), but extremely effective. The only downside is that the GUI is currently not resizable, but I’ve been told this is something the developer is working on at the moment.

I also love the way you can modulate almost everything with extreme ease—a great example of elegant yet unintrusive design.

Here’s a quick snippet I created to show some of the modulation possibilities offered by Generate. I designed a simple plucky sound, ideal for sequences and arpeggios, then I assigned a bunch of modulation sources on some of its parameters and let it run for a minute or so. Here’s the result:

As for the sound, Generate offers a peculiar mix of wild and soothing tones. It’s definitely not a bread and butter synth (but I bet you already have plenty of those), so don’t expect to find realistic presets here. On the contrary, Generate is a sound designer’s dream, capable of creating lush, complex pads as well as piercing basses and leads, and then some.

The instrument comes with hundreds of presets (658 so far, by artists such as Matt Lange, Laurie Spiegel, Chris Carter, etc.), many of which are certainly brilliant and inspiring. But this is a synth that invites experimentation, so I would recommend starting from an init patch and discovering its crazy sonic possibilities, even before going through the presets.
That’s what I did, and I really enjoyed doing that for hours (until I realized I had forgotten all my appointments for the day!).

As mentioned above, Generate supports MPE controllers, and it really shines with this combination. I tested it using the Sensel Morph (both with its piano and Buchla Thunder overlays), and I found the results very expressive and dynamic. If I didn’t already have a controller like the Morph, I would get one even just for playing with Generate!

The synth makes it easy to use your MPE controller. Just turn on the MPE option in the top bar and start browsing the MPE preset folder. You can study those presets to understand how to make the most of the MPE integration, and possibly start creating your own expressive presets. It’s worth noting that Generate does not offer a MIDI Learn feature at this moment. 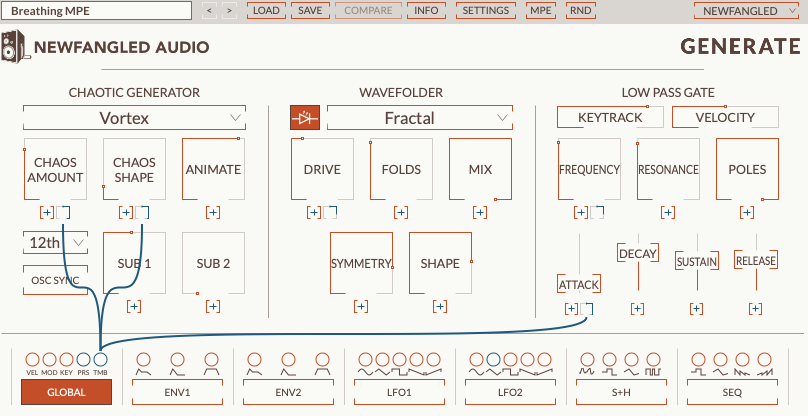 One of the MPE patches, with a detail of the TIMBRE modulation source

I asked the developer about the MPE implementation and MIDI Learn. Here’s his answer: “MPE currently works using PITCHBEND, PRESSURE, and TIMBRE as modulation sources, which allows fine-grained audio-rate control of these inputs and works really well. We are also working on MIDI learn at the moment, and will probably include these sources, as well as the other MIDI CCs, but I think using them through the modulation system will continue to be the best way to use them.”

I have tons of virtual synths on my computers, but only a handful of them are the ones I really find inspiring to play and ‘musical’ (to the point I wish they had a hardware counterpart!). Generate is now one of them. Whether I am working on an ambient piece or on something that requires some organic, edgy sounds (from trip-hop to industrial, you name it!), I know I can open Generate and get quick results.

Although this instrument comes from pretty ‘esoteric’ background theories, the interface makes it easy to grasp even if you’re not exactly a synth nerd (and that’s a big plus in my book).

All in all, I would recommend Generate to those musicians and producers who love experimenting with sounds and discovering unexpected paths in their creative journey.

As Dan Gillespie pointed out at the end of our short exchange about Generate, “Chaotic systems are powerful and make interesting sounds, but can also be very non-musical. The challenge and, I believe the success, of this synth has been turning those interesting sounds into something you can reliably make music with.”. I couldn’t have said it better myself.

Generate is available at an introductory price of $99, or equivalent in other currencies (regular price $149). Crossgrade pricing for owners of the Elevate Bundle is $69 and $79 for owners of other Newfangled Plugins. A demo version is available here.

Learn more about Generate on the official web page.