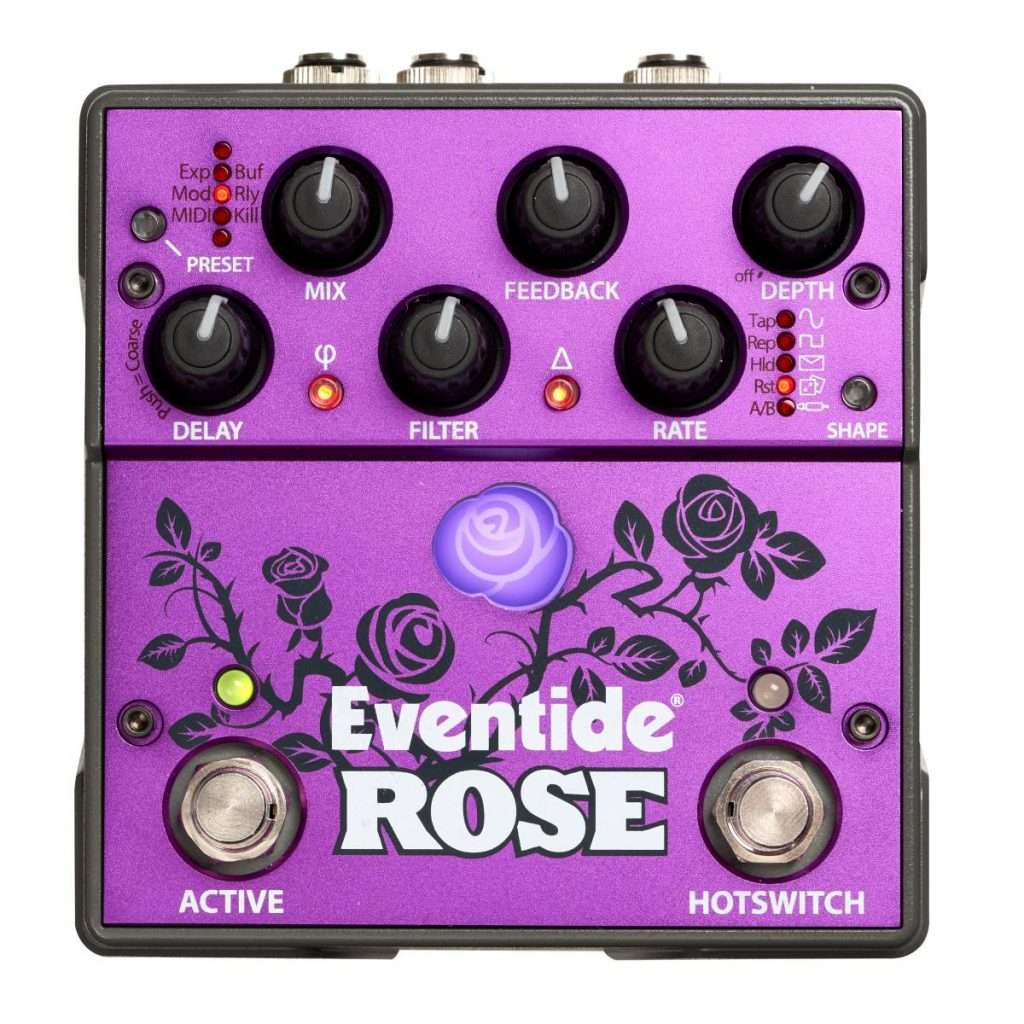 Eventide Audio introduced Rose as a “new and unique guitar and bass effects pedal” at Winter NAMM 2019. Guitar players have been raving about this pedal, but how well does it play with our beloved synthesizers? Is it a tool worth buying for electronic music producers?

This Is Not A Rose 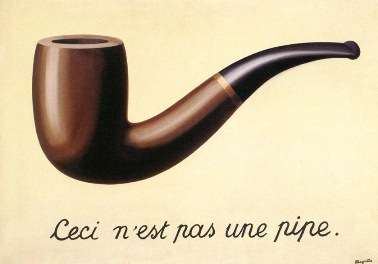 Ok, so let’s start with a quick overview of this product. Eventide Rose is a delay. Fine, but that’s just the beginning of the story.
Rose is a quite peculiar stompbox, a hybrid analogue-digital one. Rather than effects running on a DSP chip, Rose is a simple, super-modulated, digital delay line (DDL) combined with all-analogue circuitry bred for mixing, filtering and feedback. 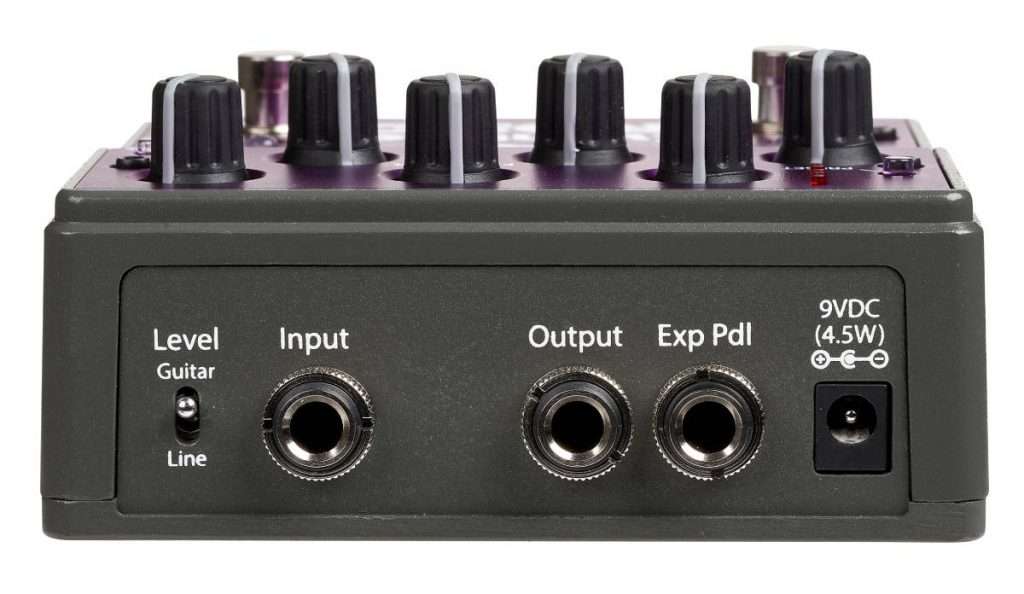 The delay is derived from a variable digital clock that can be swept over a range of ~200kHz for maximum ﬁdelity with up to 10 seconds of delay, down to ~8kHz for 50 seconds (yep, 50 SECONDS!) of delay.

As we will see and hear, this unusual design makes for very ‘organic’ sounds, that range from lush to experimental.

It’s an analogue circuit contained within a small chip that delays an incoming audio signal, initially designed in the Philips Research Labs in 1969. The term “Bucket Brigade” is a reference to the technique used by firefighters to put out a fire by passing buckets of water, one by one, down a line, as brilliantly explained in this old Roland Canada article.

The water in this example is the incoming audio signal. The “buckets” in a BBD come in the form of a series of capacitors inside the chip. Capacitors “carry” the signal much like the buckets carry the water. Because the capacitors are continuously filling and emptying, this slows down or “delays” the signal as it takes more time to pass through the BBD.

The Eventide Rose accepts both instrument and line signals (unlike many renowned BB delays of the past). It’s a mono effect, but it can be a good match for any kind of synths, as these few snippets from Soundcloud and Instagram will show:

In the video below you can hear some of its presets with a Moog Mother-32, a Roland SH-01 and a Korg Minilogue

I’ve used Rose with the Vermona Perfourmer MKII and the Arturia Microfreak since both these synths have no onboard effects (stay tuned, we’ll have some sound samples for you in the next days).

During my test, I found that Rose is as versatile as it gets – after all, with a pedal that can offer from 10 microseconds right up to 50 seconds of delay, you can hardly get bored. From new wave-inspired chorus, flanger-like effects to ambient-friendly loooooooong repeats, Rose has it all.

It’s not only that, though. I loved playing with the filter to tame specific frequencies and give a sort of tape-like ‘warmth’ to the sound.

Also, tweaking the modulation controls I’ve been able to dial in some pretty ‘wobbly’ sounds that would please any Boards of Canada fans.

The cherry on the top for me is the reverse button, always a great source of inspiration. Speaking of inspiration, don’t underestimate the expression pedal option: I plugged a Moog EP-3 (by the way, it’s affordable and works great!) and that opened a whole lot of extra possibilities (read: morphing between different settings!). Definitely worth trying, especially if you’re into experimental sounds. 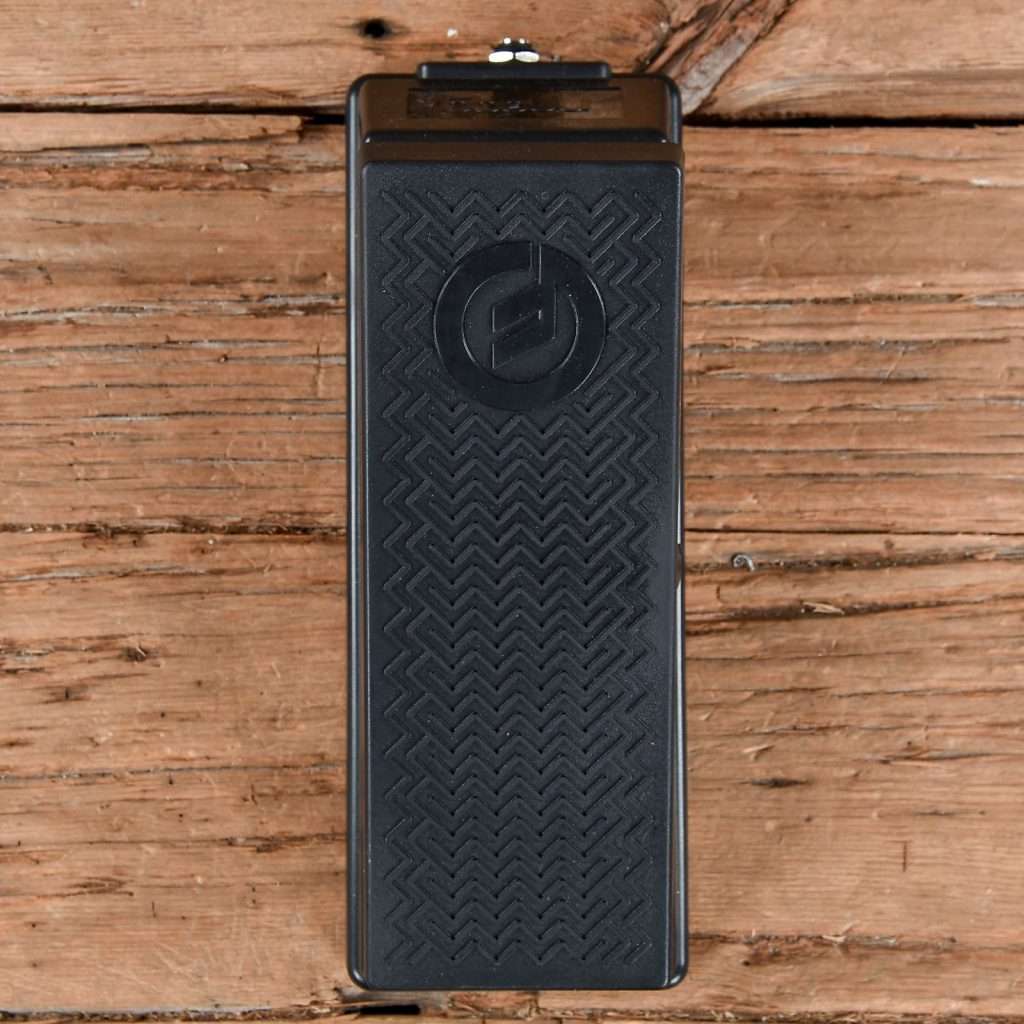 As said, Rose is a pretty compact yet feature-rich stompbox. This means that some of the options will likely require you to RTFM – i.e. the delay knob is for both fine-tuning and coarse adjustments, while other features require a button combination. Nothing too complicated, but you might want to keep that reference guide handy until you’ve figured it all out.

All I can tell you is that after playing with Rose for a few days, I’ve been able to create some textures and patterns that I wouldn’t have come up firing up some plugins on my Mac. And not simply because one sounds ‘better’ (whatever it means) than the other – although Rose has probably an edge here. It’s just that the hands-on controls, coupled with the mojo of the unit, made for a ‘more inspired’ and fun creative process. And that’s all we want, right?

Whether you’re a live performer looking for a compact yet great-sounding delay, or a producer looking for some new flavours to add to your palette, do yourself a favour and check out the Eventide Rose!

This Is Not EDM 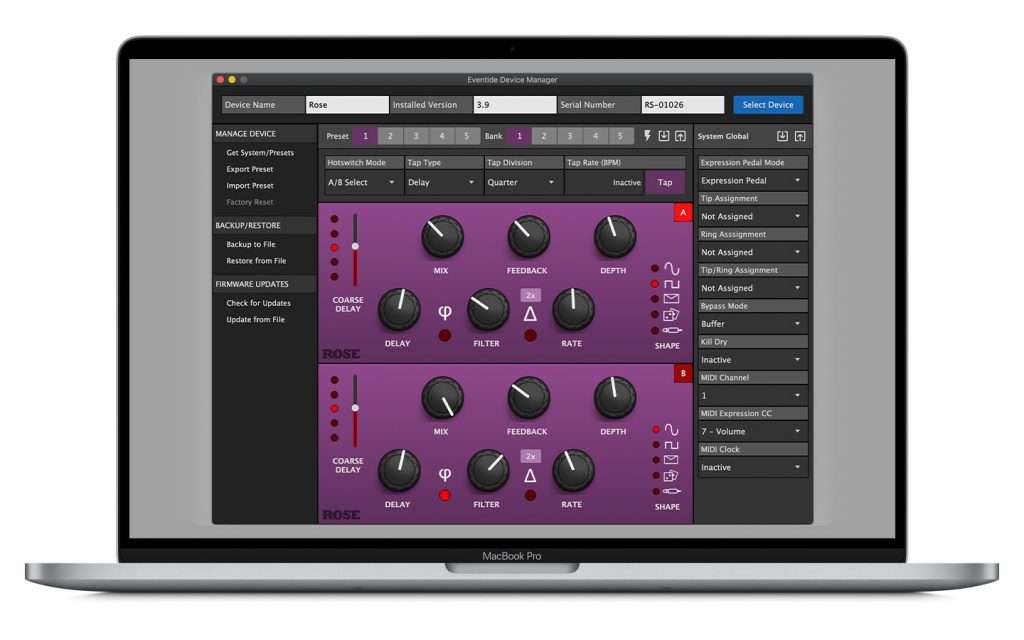 In Eventide’s world, EDM stands for Eventide Device Manager, a dedicated and powerful software editor for Mac and PC that you can use to unlock the full potential of your Rose.

Just connect the pedal via the USB (mini-B) port to your computer and install software updates, create and manage presets, set up MIDI, and backup/restore the device. Effortlessly make changes to the Rose by auditioning and experimenting with different sounds directly from the software.

I’m a big fan of Eventide’s fully digital stompboxes (Space, TimeFactor and H9 would definitely be among my desert-island sound machines). Still, I’m happy to see the New Jersey company setting out a new path with Rose.

I’ve been digging this little hybrid gem. It can go from clean, pristine delays to more experimental ones, retaining a lovely analogue and kinda ‘tape-like’ vibe. In my experience, it works great with both synth and percussive tracks.

Cons? Nothing relevant. Maybe the fact that some of the features are not as intuitive as I would like them to be, and that there’s no separate MIDI input – but I think it’s an acceptable trade-off between size and features.

Whether you’re a live performer looking for a compact yet great-sounding delay, or a producer looking for some new flavours to add to your palette, do yourself a favour and check out the Eventide Rose!

Retailing for approx. $279 (at the time of writing), Eventide Rose is reasonably priced for what it is – especially considering that you would have to spend at least $1000 to score a second-hand MoogerFooger MF-104M, a cult BBD unit! If you’re on a budget, you can also

check out the deals on eBay!