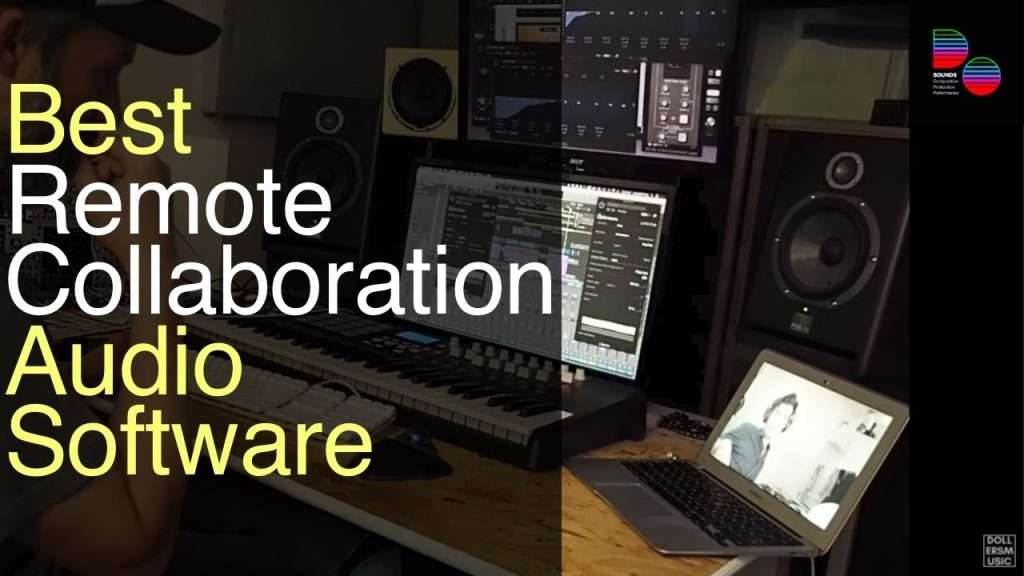 My business partner and I live on opposite sides of the Atlantic, with studios in Brooklyn, NYC, and Bournemouth UK. We’ve been working remotely for over a decade now. With the current global situation, and the future uncertainty of what music business will look like, we’ve been looking to expand the capabilities we provide as producers, mix engineers, and composers for media.

In this article, I want to take a look at 3 different software programs that reflect those different needs, and I’ll give you an overview and thoughts on each of them. If you’re looking for something like this for your setup, then hopefully this helps a little.

These are the three software programs we decided to test out:

They each offer something slightly different, and might appeal to you more or less for those various features.

Sessionwire is an all-in-one package that provides high quality and stable audio over a network, and combines it with live video and audio (talkbalk) chat with screensharing possibilities. 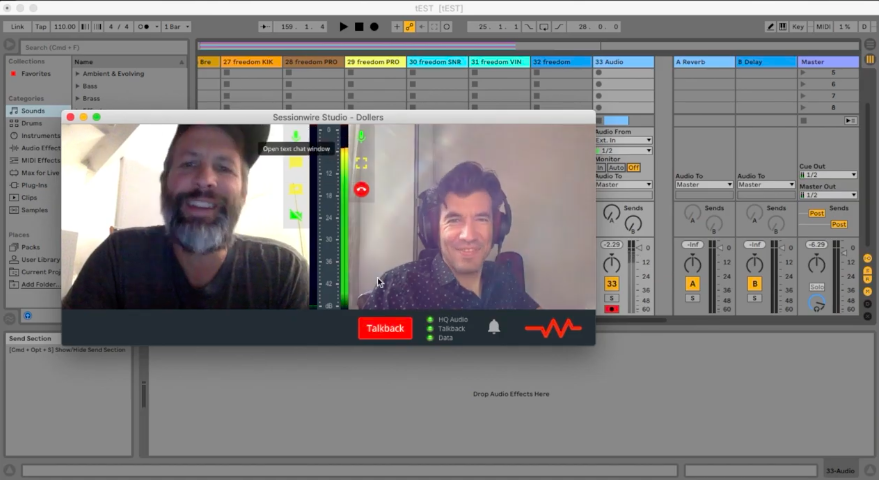 It’s a simple setup, download the software, create an account, invite clients to connect with you from the online account. Once your session is up and running in the DAW, ensure that your drivers are changed to the Sessionwire multi-driver (clearly explained on Sessionwire’s website), open up an instance of the Sessionwire software, and you’re up and running. Select a client from the drop-down menu, and you’re connected via video and network audio, so you can immediately begin tracking, sharing a mix, and collaborating.

In use – we found it simple to use. It looked the sexiest of the three – the most pro looking. Audio quality was excellent, as was stability, as long as you both had fast internet.
We didn’t like the fact that you can’t change anything about the audio or video quality (aside from turning the video off). We used Sessionwire to tutor a client in New Zealand, and their internet wasn’t fast enough to cope with the demands of Sessionwire. We ended up just using a different software on the list.
It’s also not clear what the quality of the audio is that’s being sent. I’m assuming that it’s the same quality that is set up on your DAW but couldn’t find any confirmation of that.

You also absolutely need a webcam and talkback functions, otherwise, the software just won’t work full stop. If you don’t have webcam functions on the computer you’ll be using Sessionwire on, then you’ll need to take that extra expenditure into account.

Sessionwire is a monthly subscription of $15 or $150 annually.

Soundwhale was created with the main focus being the Post Production market. It has a similar setup to Sessionwire – being an all-in-one program that requires you to assign drivers in the DAW, with video chat, audio chat, and high-quality audio over network capabilities.

However, that’s just the beginning. Soundwhale is incredibly deep and flexible. The software GUI needs an entire monitor screen to itself, there’s so much going on. 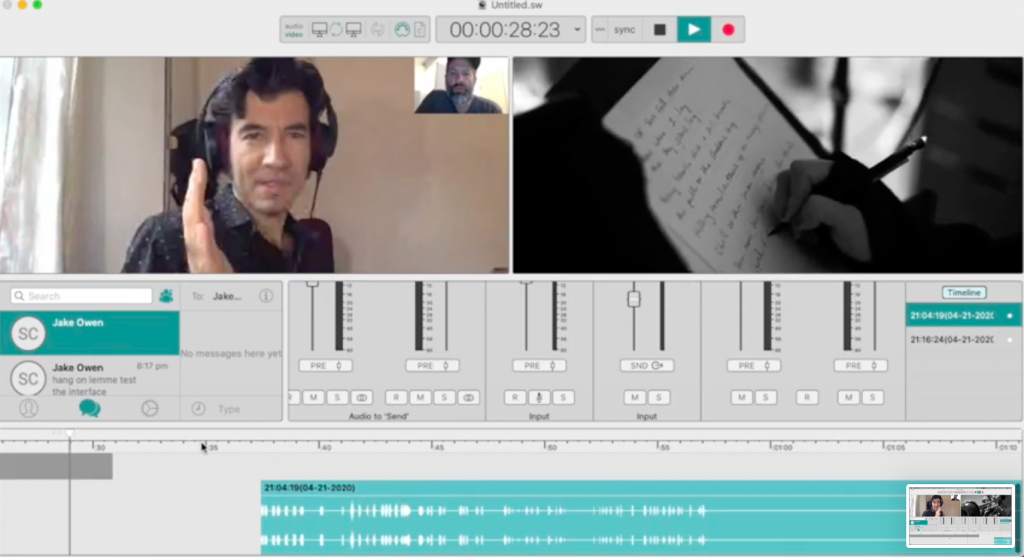 As well as video and audio chat, there’s also text messaging, there’s a second video window for streaming uploaded video alongside the audio, which is massively useful if you’re mixing audio to video, or recording audio to video, spotting with a director (incredibly useful is a timestamped messaging feature, so anyone can make a note and tie it to a timestamp on the video). The bottom of the GUI is an audio timeline, where all uploaded and recorded audio from the session is situated like a small arrange window of a DAW. To tie it all together is a mixer routing window, where you can choose what audio is routed where locally and over the network. Sound complicated? Yes, it is.

There are even more excellent features – way too long a list to be included here, but further standouts to me are MIDI streaming capabilities – so you can control a softsynth over the network, record and automate and save audio live, and remotely. Superb! And there are some basic MMC controls, so not only can you sync and control the basic transport of your DAW with Soundwhale, but you can set up sync over the network, so you can control the transport of the client/musician on the other end, potentially controlling the computer to record so they can focus on playing the musical instrument.

In terms of client feedback and communication, there are also iOS and browser companion software. Your client can access your live stream from anywhere on the planet that has data signal. So your director can watch a stream from the beach or your artist client can listen to your latest mix and make notes while they’re on an airplane if they wanted.

Soundwhale is by far the most flexible setup out of the three. The stuff you can do with this software had us a little gobsmacked. For Post Production – composers or sound design/mixers working with studios and directors, this software is far more capable of doing video work over a network. The other two are just not able to do this. However, because it’s the most flexible software, both in terms of features and also in routing, that means it’s by far the most complex to set up and maintain a smooth process. When it worked well, the audio quality and stability were on a par with the others. However, it felt to me like the software wasn’t completely finished or smooth running: there are too many instructions saying expect this glitch, and this is the workaround. If the video chat window freezes for example, then wiggle it up and down, or if you’re on a mac pro, you’ll need to adjust the audio preferences otherwise it’ll just crash. I think that if you’re charging for software, then it needs these rough edges ironed out. As it stands, I wouldn’t trust the software as much as the other two, in a professional situation. However, the developer has been in touch, saying that he’s aware of the limitations of the software and he’s working hard to remedy the bugs, and improve the workflow of the software in general. So big Kudos to Soundwhale for their active work on the software, and I wait with bated breath to see what the outcome of their work is, as I think that when the software is better it’s going to be hard to beat for an all-in-one solution to audio recording over a network.

Soundwhale starts at a very respectable $0 a month!! However the feature set is pretty basic with this – basic streaming and video/audio/messaging chat only. You can’t record top-quality audio, or stream video. It might be a great place to start though if you’re looking to tutor, or just explore collaborating remotely.

Listento is a slightly different take from the other two. Audiomovers have created a couple of plugins for Windows and Mac that integrate directly into your DAW, acting as an audio effect, but routing the audio from the channel that you put it on over the network. There are two plugins – send and receive. You need to create an account online, then login to the plugin with your account details. Once logged in, you just send the client the session link that’s created within the send plugin. They paste it Into their receive plugin on their DAW, and they will immediately receive the audio being streamed over the network.

You can have multiple instances of the plugins on your system. So you can send audio from the master bus, and multiple separate channels simultaneously. The client can pick what stream he/she wants to receive from a drop-down menu in the receive plugin. 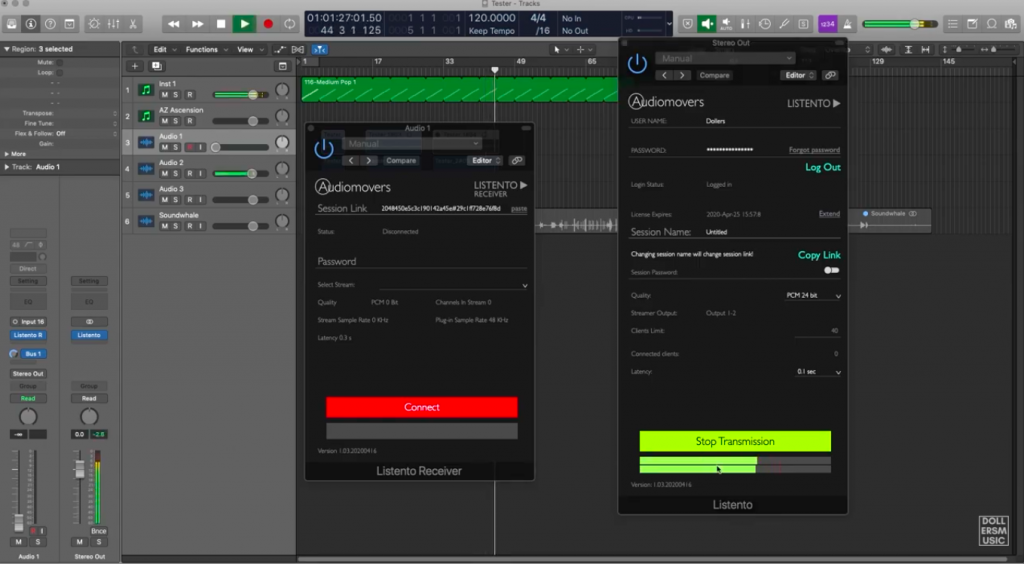 You can choose the audio quality, from fairly low MP3 compression, to uncompressed 96k audio. You can also select latency from 5ms to 100ms. I found this useful, as in some situations you don’t need low latency, (ie non-recording situations) so you can up the latency and ensure a more stable signal.

We found Audiomovers Listento to be by far the simplest setup. Because there’s no talkback or video options on the plugin, there’s no tricky routing or drivers to work with. We had it up and running the first time on every system we tried it on: Ridiculously simple.

Sound quality is top-notch. The stability was excellent. The latency is excellent! The downside to the software is that there’s no communication element to it. This is quite easily resolved with free VOIP software, however, and you can achieve everything that Sessionwire offers with a Skype or Zoom session on the same computer.

The subscription set up for Listentois more of a pay as you go situation, starting at a measly $4 a week, going up to $100 for the year. I love this no contract setup, as it means you can essentially just use it project by project, and add the cost to the project cost.

I used it with Zoom, but you can use it with Skype or FaceTime also. To me, this is the most flexible solution. I chose to put the Video chat on a separate device, so it was taxing another CPU and GPU – not my main system one. This isn’t an option with the other two software. 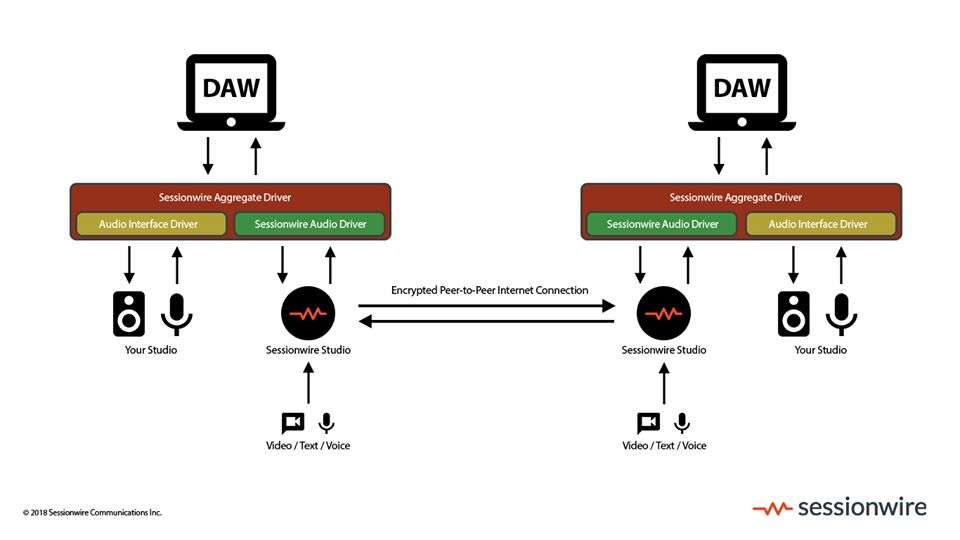 Well, I can tell you which we ended up going with. But they’re like cousin software. All the same concept, but taking it down different routes.

Sessionwire I would say is for producers who need no mess all-in-one mix and record software. They don’t want to mess about with any other software, just load it up and use it in recording, mix, and master sessions. It seems to me that once you’ve got it set up properly, you can just turn it on when you need it, use it to do the job, and turn it off. Solid. Excellent if both parties using it are experienced with their equipment, and aren’t going anywhere.

To me, Soundwhale has the potential to be the composer/post audio dream. Being able to collaborate live on any kind of post stuff is fantastic. To me however, this software was the glitchiest and needs some bugs ironed out before I’d trust it to use day in day out with my clients.

Listento is simple and super basic, but this is the one we use the most. Audio quality and simple functionality mean there’s no worries about setting up or even getting a client to set up. I think this is the nah-brainer for us, as we work with people who vary widely in their skillset when it comes to working in production. I would quite happily walk someone with little experience on their equipment through this. It’s literally a couple of clicks.

One thing to note – because we’re dealing with networks that are out of our control, I would hesitate to use audio that’s recorded online as the final file for the session. What we’ve ended up doing is recording live, but having the player record their session locally also, and once we’ve found a take that works, have them FTP the original take direct. We found that the slight audio drift that happens inevitably over a network just isn’t good enough to be rock solid for recorded audio. I imagine that will be the case for many years to come.

Sessionwire starts at $15 a month
Audiomovers Listento starts at $4 a week
Soundwhale starts at free!! (more features at $18 a month)