Being a low budget and a relatively fast-paced project, I knew from the start that this album was mostly software-driven. Going hardware would have meant some serious investment in vintage or boutique gear, so not an option. True, Behringer is coming to the rescue, but at the time of the recording, they had barely released one or two synths (I actually checked their MS-1 and sent it back right away – must have got a lemon – the build quality was poor, the sequencer was acting up and I just didn’t have time to deal with that).

If you only have the budget for one hardware synth for this task, the DSI Prophet Rev2 is a great choice…

As for hardware, I decided to rely on a Dave Smith Instruments Rev2. It’s an 8 or 16 voice polyphonic analog synth that doesn’t break the bank and is a fantastic tool to create the sounds I needed for this record. I mean, it just screams ’80s as soon as you start playing it, and yet it offers plenty of modulation options if you want to go crazy with your sound design!
The DSI Rev2 is a hands-on synth with plenty of knobs and basically no menu diving. Some say it’s not “analog enough” but I don’t care. It sounds good, it’s a joy to use… what’s not to like? Plus, it also doubles as a quality 61-keys MIDI controller, which can be quite handy.

Speaking of ’80s sounds, the Roland Juno series is an obvious reference (even though it’s so overused that I tried to use it as sparingly as possible). For my laptop sessions, the good old TAL U-NO-LX (an emulation of the Roland Juno 60) was an easy choice. It’s super-affordable, light on the CPU, it sounds good and there are plenty of cool, free presets available online (on top of the factory ones). TAL-U-NO-LX costs approx. €55 and is available here. If you would like to read more about it, you can also check out our TAL U-NO-LX review. 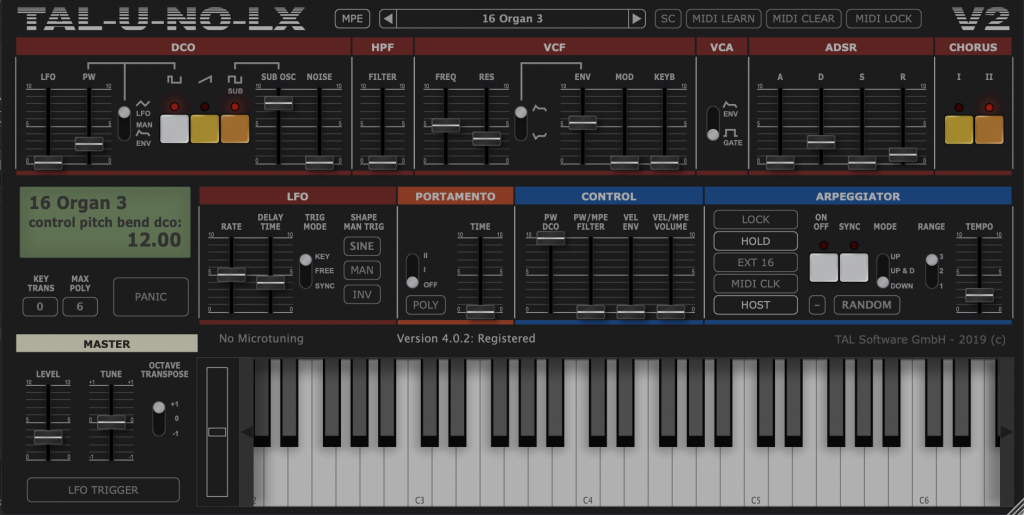 Still going strong after all these years. The CPU of your computer (and your wallet) will thank you…

For more critical tracks, where I needed more ‘body’ and ‘analog-like details’ I went with a 1-month subscription to the Roland Cloud service. Their Juno 106, Sh-2 and Jx-3P (just to mention the synths I’ve used, there’s much more stuff in the package, D-50, TR-808, 909, etc.) sound fantastic and indistinguishable from the originals. Quality comes at a cost though – you need a high-end computer to run these plugins.

My laptop could barely cope, so I had to rely heavily on Logic’s Freeze feature. On the contrary, the recording studio’s powerful Hackintosh was a great match for these CPU-hungry plugins (and yes, we’ll have an article on switching to Hackintosh soon!).

That said, considering the top-notch quality, the $20 for Roland Cloud’s platform was money well spent (FYI: it gets cheaper if you opt for a yearly sub). To join Roland Cloud visit the dedicated website. 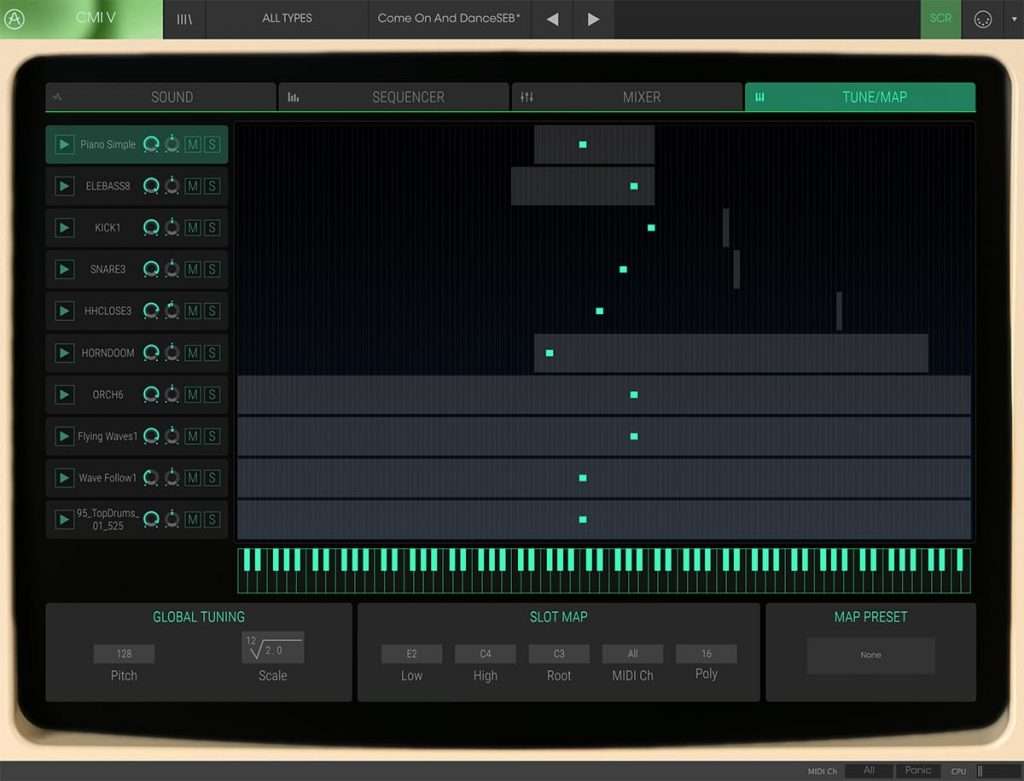 Arturia’s take on the iconic Fairlight CMI. Make sure you’re wearing that Kate Bush (or Peter Gabriel) t-shirt while playing it…

I’m a fan of the Arturia V Collection (for a proper in-depth look, please check out our Arturia V Collection review), and some of its synths, such as the Fairlight, the Synclavier and the DX7 were an obvious choice for adding that unique early ’80s digital touch. By the way, some of these were incredibly expensive instruments back then (you would have needed £20.000 for a CMI Fairlight!) and it’s awesome to be able to use them as plugins in a DAW.

These guys know a thing or two about vintage synths, and their VSM is now better than ever…

The late ’70s/early ’80s were also characterised by the sound of the string machines. Arturia’s bundle boasts the famous Solina, but I’m also a great fan of classic plugins such as Gforce Virtual String Machine.
VSM recently reached version 3, and this big update – stereo playback of a range of previously unreleased, stereo sounds-sets, two new interfaces sizes in two designs along with an additional LFO destination – made it even more enjoyable than it was. VSM costs £79 and you can get it here (on the same page you’ll also find a trial version and tons of fantastic info on the string machine world).

At some point, while working on a couple of songs that needed some extra touches, I decided to add some vocoder parts. For this purpose, I went with Xils V+ (a faithful emulation of the Roland Vp-330, the iconic string/human voices/vocoder machine, Laurie Anderson – O Superman, anyone?).

Xils V+ is super easy to set up (there are some dedicated vocoder presets you can easily tweak) and the tone captures the magical vibe of the original Roland machine. Plus, being a plugin, you get all those nifty extra touches (fx, modulations, polyphonic attack, etc.) that you won’t find on the original Roland hardware.

As authentic as it gets. My favorite software vocoder, but also a killer string machine…

I recorded most of my vocoder takes with the ultra-handy Rode Podcaster USB mic. I got it with the kit that allows you to mount it on your desk, and if you’re on Mac, you can use an aggregate device to my main audio interface made it incredibly convenient. 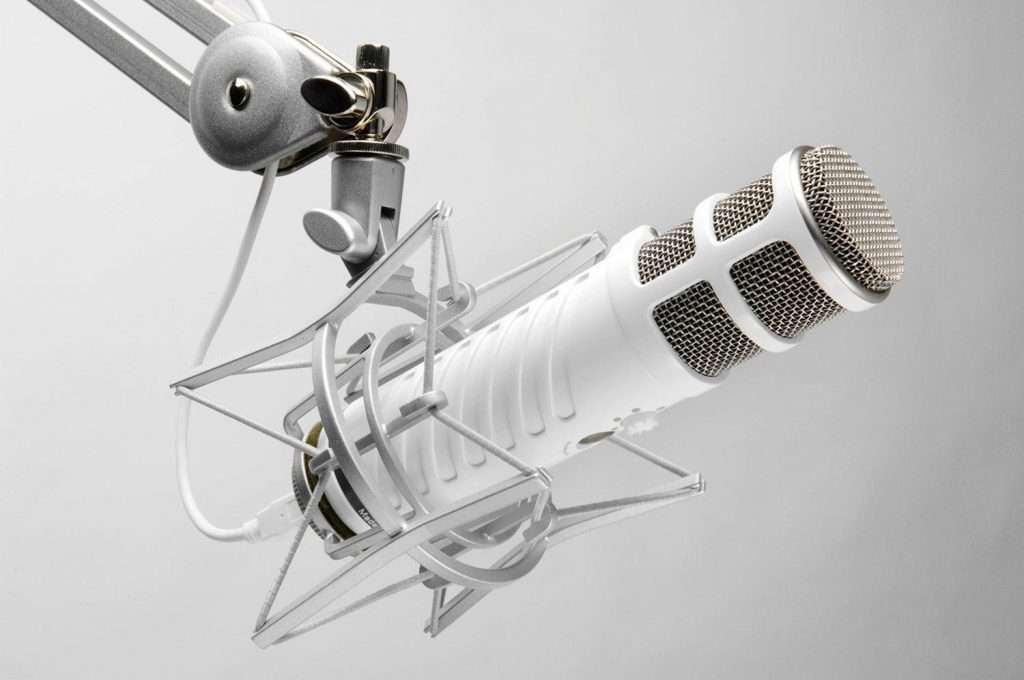 Even if you’re not a podcaster, don’t sleep on this RØDE USB mic. Perfect for vocoding, and more…

If you’re interested in the classic tone of the original Roland machine, it’s worth knowing that Behringer has recently released a clone named Vp-340. If I would go on tour, that would probably be my choice (even though it’s quite heavy), but for my studio sessions, Xils V+ is a keeper. You can get Xils V+ here. By the way, Xils Lab has just launched the Analog String Machines bundle (which includes Xils V and the recently released Xils 505, a brilliant emulation of the Roland RS-505) and is having a cool sale until the end of the month, don’t miss out!

Soniccouture The Attic 2 is another highly recommended toolkit. If the Arturia V Collection could be defined as the ‘mainstream’ option, Attic 2 is the perfect boutique, ‘underground’ sibling.
With these 18 classics (going from the Philicorda to cult synths, string machines and beyond), Soniccouture used all their sampling tricks and magic to create a must-have library for any boutique synth fan.
Version 2 added exactly the extra flavours I needed for this album (Cheetah MS800, Siel Orchestra 2, Arp Omni 2 were some of my favourites sources for some of those edgy/cheesy seventies sounds). 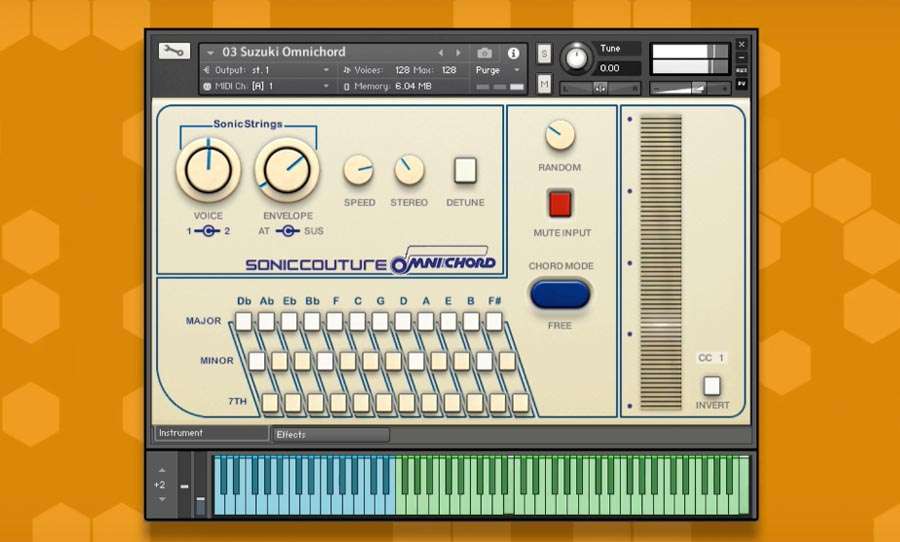 The Soniccouture team has the ability to turn everything it touches into gold. The Attic 2 is no exception…

I also used some of the other emulations (there’s a fantastic sounding Omnichord, a lovely Philicorda, etc.) to create layers of sounds, especially for riffs and leads. The great thing with Attic 2 is that it sounds so alive and ‘organic’, it just sits well in a mix.

This is a case where top-notch sampling and quality post-production beat analog modeling hands down. Also, you get 473 (!) well sorted presets – a great resource for those producers on the run. Soniccouture Attic 2 costs €179 and it’s worth every single cent. You can get it here.

Speaking of boutique sample libraries, I’m a big fan of Kontakt Hub (now Loot Audio), a platform that hosts unique (and often, incredibly affordable) Kontakt libraries from talented indie developers.
For this project, I picked a few of their products (not necessarily recent), starting with Monopolyphonix, by Hideaway Studio. This is a creative and inspiring take on a semi-obscure Italian gem of the seventies, the Farfisa Syntorchestra, a rather odd combination of poly strings and mono preset synth voices (made popular by artists such as Vangelis and Klaus Schultze). 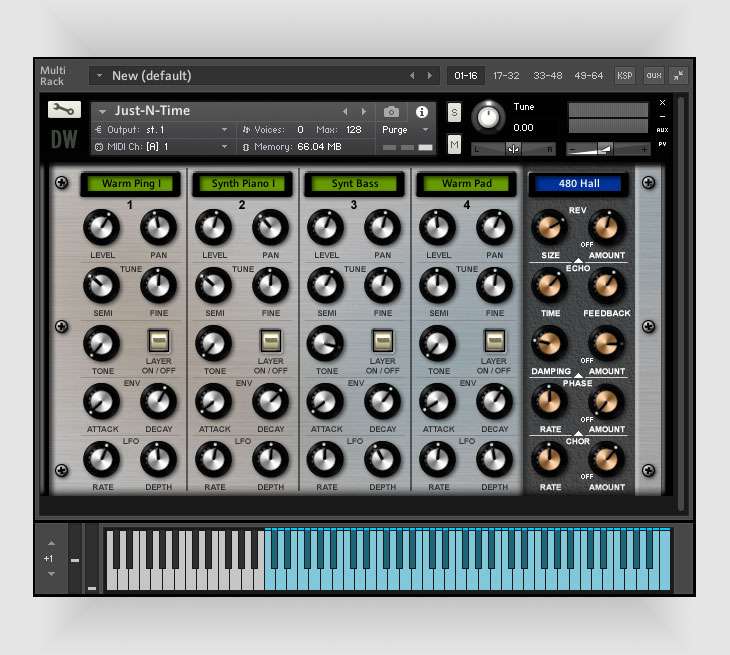 As said, Monopolyphonix doesn’t offer a 1:1 reproduction of the original instrument. The developer, in his own words, “treated the instrument more like the raw material for an array of new sounds that reached beyond the original.” A Syntorchestra on steroids!

You get a streamlined 4-Voice Layering Engine, a matching FX section (with some cool impulse responses), 34 presets, and some Multis that show off the possibilities of this library.
As for the visual interface, I like the no-frills approach of these Hideaway Studio libraries, as sometimes Kontakt instruments tend to offer an overwhelming array of options.

Monopolyphonix costs £14,50 + tax (you’ll find it here) and it’s a super affordable retro gem that I’m happy to have in my collection.

Hideaway Studio has another library that turned out pretty helpful during the recordings. It’s called The String Collection and well, it’s exactly what it says on the tin. Creatively layered evocative string-like sounds from the (very) past, with sources such as Novachord, Eminent 310, and Arp Omni. When you make some late seventies/early eighties music, you can never have enough pad sounds, so this The String Collection is a valuable addition. Also because it’s only £15! The library is available here. 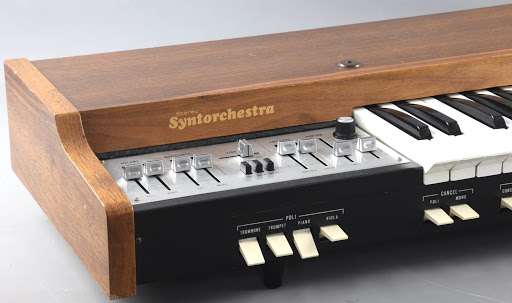 A semi-obscure made in Italy gem, with some lovely organic sounds…

Going back to the Farfisa Syntorchestra, there’s another library I recommend – Farfiso by Detunized. While the above mentioned Monopolyphonix focuses on a ‘reinterpretation’ of the original instrument, Farfiso offers a somewhat simpler, more faithful approach.

As stated by the developer, all possible combinations of mono and poly presets have been sampled to a total of 49 presets that feature the original sounds. Also, while Monopolyphonix is a Kontakt-only library, Farfiso comes as a Live Pack or as a universal library (SFZ, NKI, SXT, EXS, FXP). This multiformat version was particularly helpful for my on-the-go laptop sessions (train, cafe, etc.). I was able to run these patches in Logic Pro X’s EXS24 sampler, notoriously less CPU-hungry than Kontakt.

Farfiso costs 13/14€ (Live Pack/Universal Format, available here) and I dig it because it is the only (AFAIK) library with a 1:1 reproduction of the original presets. 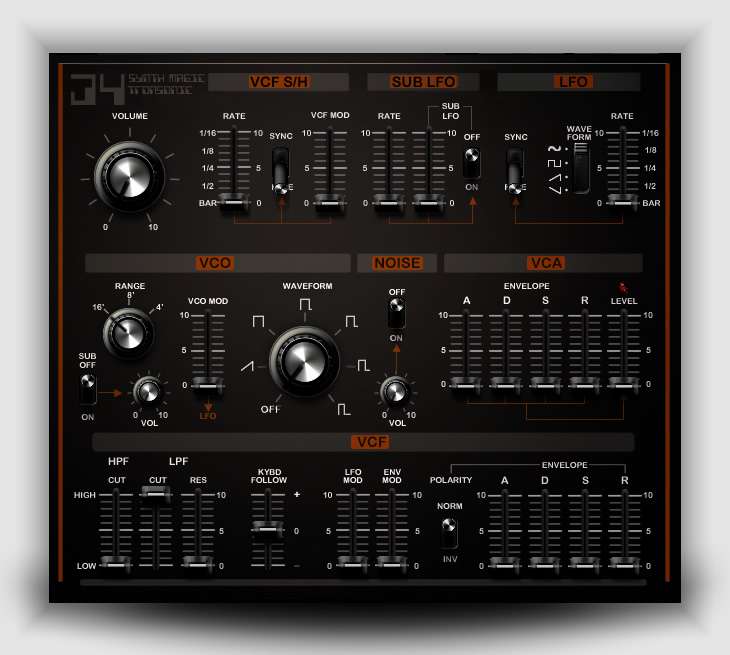 I got some really wild sounds out of this one…

Another library worth having is Tronsonic’s J4, a thick, warm-sounding emulation of the Roland Jupiter 4. This library features 2 different sets of samples – one set recorded ‘DI’, with a NEVE style pre-amp/eq and boutique valve mixer at 48khz/24 bit. The second set uses the same method but has also been recorded to brand new ‘old-stock’ tape at 15ips on a Studer A807 quarter-inch reel-to-reel recorder.

I liked J4 because it doesn’t feel like a VST – expect plenty of vintage character from this baby! J4 costs £30 and is available from Loot Audio here.