Eventide recently released 3 popular effects from the H9 platform (one of the winners of our 2015 Sonic Joy awards!) onto iOS. They are, in no particular order, Blackhole reverb, UltraTap delay, and Micropitch. An update went out as I was reviewing them to deal with a couple of bugs and they now seem to be working flawlessly on my 5th gen iPad. 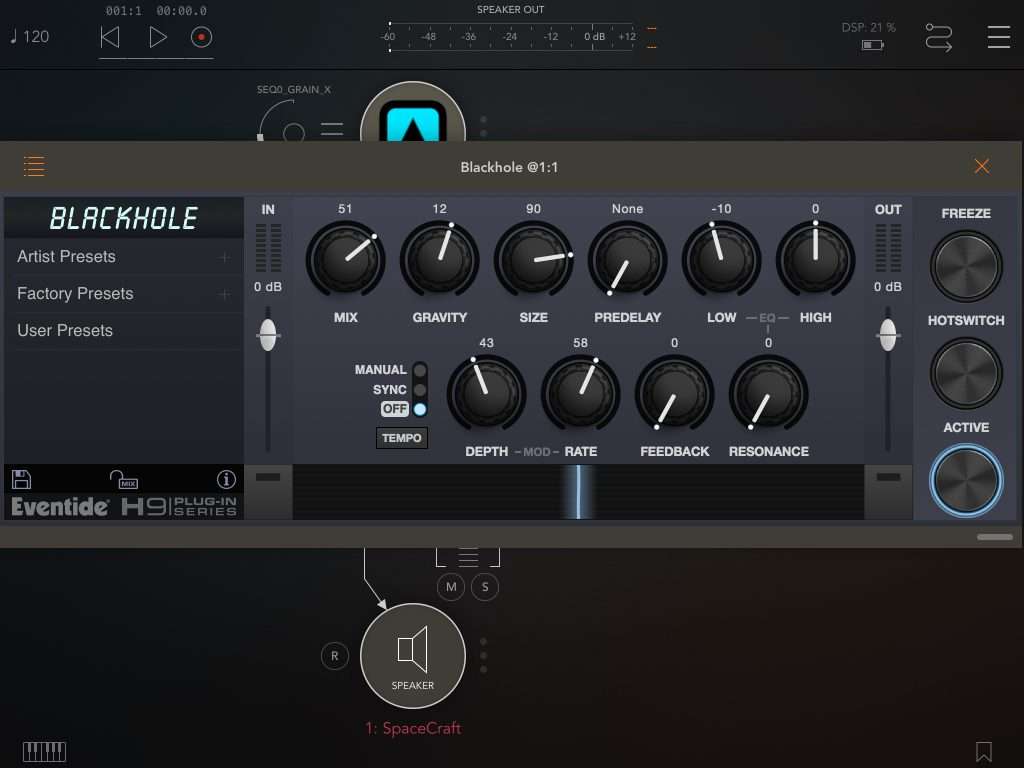 Blackhole is now the stuff of legend. There’s not really a reverb like it on the market (cue all Strymon lovers complaining…) and it’s one of my favourite plugins period. It’s my go-to reverb for a creative effect rather than placing a sound in the stereo image. It’s a beautiful space-age algorithm that can dump your sound source in a tiny tiny tin cup, or infinite bottomless abysses (hence the name). I find it super pleasing to my ears, and despite the weird spaces, it fits really well in a mix. Blackhole gets name-dropped often across the musician/producer landscape.

All of this stuff can be synced to host (in the case of this picture – AUM by Kymatica), or totally free running. The EQ added is simple, but effective. If I could wish for one thing with this plugin, it’s that the freq ranges on the EQ could be shifted. But for the price, this is a fantastic chance to grab up a future piece of music production history! 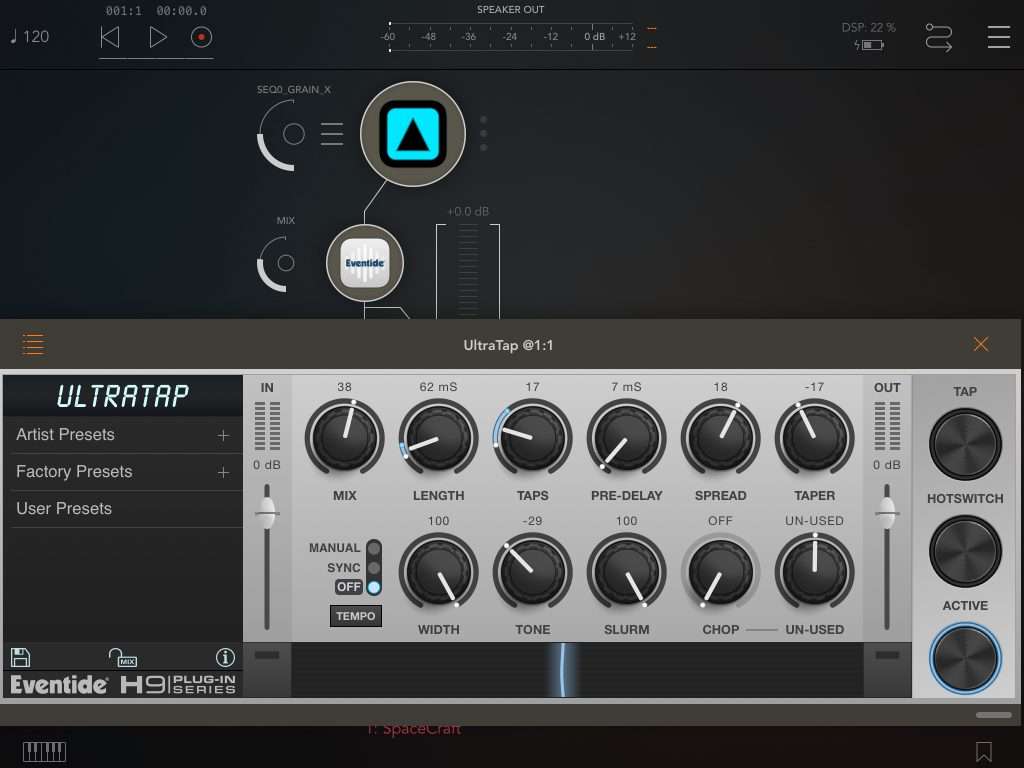 Following in the footsteps of the Blackhole, UltraTap is a creative delay plugin that could be used as a regular delay effect. This would be a massive disservice, as I think it comes into its own when used with the more eccentric elements of the plugin in mind.

It’s easily possible to create soundscapes, pads and drones from the source material, with a twist of a couple knobs. There are even preset folders dedicated to them. UltraTap is developed from the original classic H3000 studio delay. There are up to 64 delays that can be added, you can choose the length of the delay, the wet/dry mix, and the pre-delay giving you some sonic clearance before the delay onslaught begins. As with the other plugins, delay can be synced to host, or manually adjusted.

The same hotswitch and ribbon controller are there enabling you to morph or flip between two different settings. These are in other versions of the plugin, but I think they’re realised most fully here on iOS. Just fantastic.

There are several controls giving you ways of approaching delay more esoterically. My favourite is the ‘slurs’ control, which gradually fades off the transients. This control makes it easy to get into drone/pad/scape territory, with the tap amount up. There’s a spread, width and taper, which control where the delay pings in the stereo image, and how fast it hangs around. There’s a built-in LFO offering a bunch of options; mainly as a tremolo of sorts, but with different wave options giving a more glitchy stutter feel to the sound.

For a more hands-on performance option you can put the LFO into ribbon mode, which enables the Ribbon controller as a gain slider for the LFO. The ribbon controller again works very well here as opposed to how it would in regular plugin format. Very cool.
  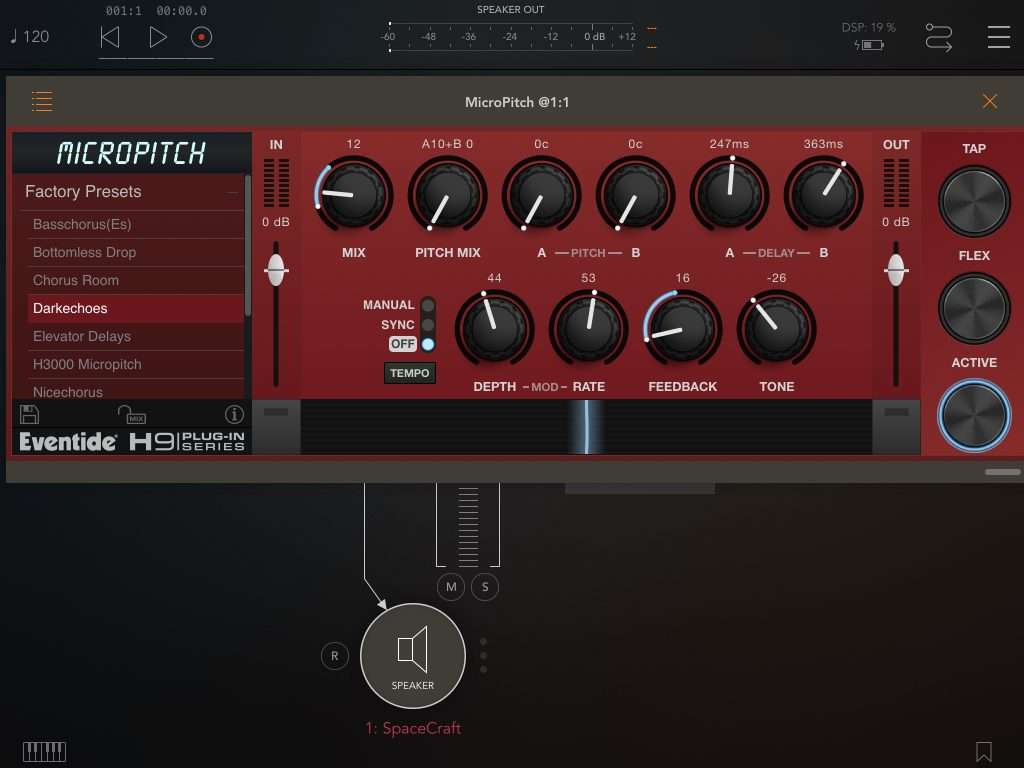 Micropitch has its roots in the iconic Eventide H3000. It adds two more voices to the original sound. One channel pitches up from unison, the other goes down. You can balance the two voices, and then mix them in with the original to taste. Along with the pitch spreading comes a delay on each channel.

There’s also a modulation source (I’m assuming just sine wave) and rate, that affects the pitch, to provide you with that chorusey warble or pitch drift. If you know the sound of the harmoniser, then you’ll recognise the sound this plugin comes up with (if you’re a Pc/Mac user, you’ll be probably familiar with Soundtoys Microshift, designed by a former Eventide H3000 engineer, Ken Bogdanowitz).

It’s a fairly pristine sounding chorus, but you can get some nice vintage tones to it with some good tweaking. As if often happens with Eventide’s products, “things are not always what they seem” (so, experiment with it!)

I don’t know how long AU plugins will be this cheap, when you’re getting essentially the same processing power, on potentially a more intuitive platform, but for a fraction of the cost. I absolutely love that smaller independent creators are mixing it up with behemoths like Eventide – and the main beneficiary is the end consumer music maker.

Let’s face it, up until a few years ago, who would have thought we would have been able to run studio-quality effects such as Eventide on a phone or a tablet? For the cost (and their iconic sound quality), these plugins are a great deal and are worth a serious look at.

I like the fact that the AU plugins on iOS are less than half the screen in terms of size. This is very useful when using in conjunction with apps like AUM which allows floating windows, so you’ve got some flexibility in terms of workflow. I like how these plugins still retain the original look and setup, so if you already own them, it’s a simple transfer to using these with no learning curve.

Last but not least, all these Eventide plugins come with cool presets, and a preset lock, so you can keep the wet/dry balance set while you browse the different effects possible.

One thing to note, is that with the rise of audio creation possibilities on iOS, so the power consumption goes up. Granted, my iPad is not the fastest, but it’s a fairly recent version. One instance of one of these plugins was taking up around 20% of my CPU (combined with AUM, which doesn’t suck much CPU on initializing.)

More info here.
Now the question is… what’s the next big name entering the iOS market after Eventide?