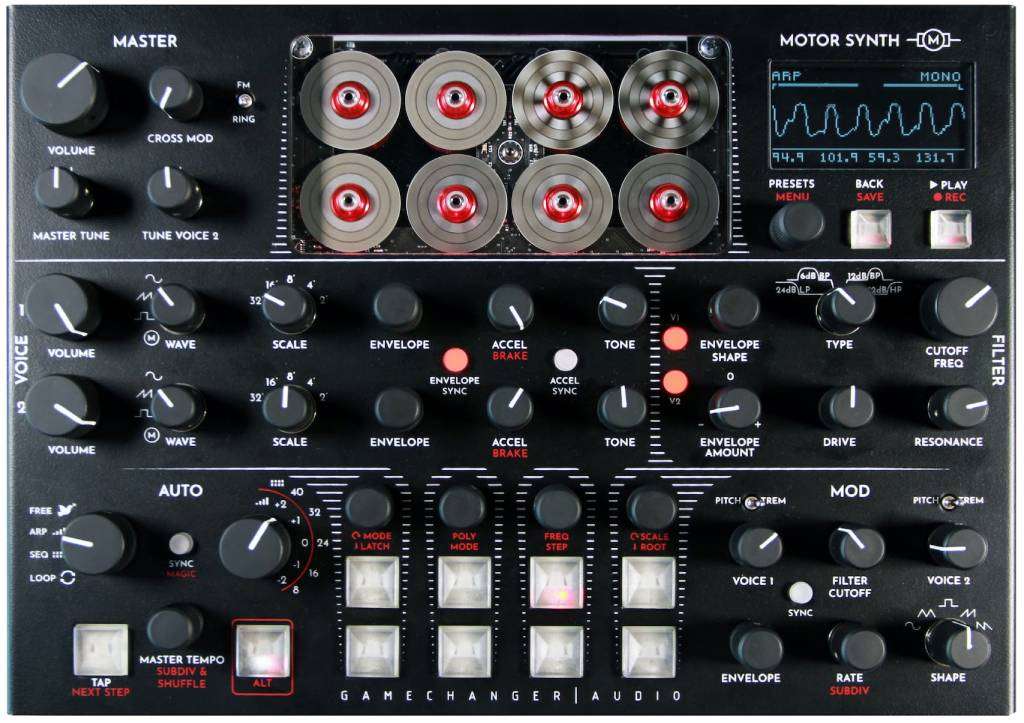 If you happen to be one of those who complain about the lack of innovation in the synth market, well, this one is for you. Having presented an initial proof-of-concept prototype product at The 2019 NAMM Show, uncharted music electronics territories explorer Gamechanger | Audio is proud to unveil the revolutionary Motor Synth.

Motor Synth is a digitally-controlled analogue electro-mechanical synthesizer that uses a system of electromotors (to convert electrical energy into mechanical energy) as its main sound source.

Motor Synth really represents a new method of analogue audio signal synthesis, since nothing like it has ever been built before. So how, exactly, does the revolutionary Motor Synth work?

Simply speaking, Motor Synth produces sounds by accelerating and decelerating eight electromotors to precise rpm (revolutions per minute) that correspond with specific musical notes. Needless to say, the instrument in question’s eight-electromotor configuration means that it is a four- note true polyphonic synth with two voices per key played.

Digging deeper, Motor Synth takes a two-pronged approach to producing its core sound, starting with magnetic pickups placed on each of its eight electromotors; those electromotors’ spinning coils result in a very industrial-sounding, ridiculously over-the-top analogue tone — think eight harmonious revving engines pumping out an intimidating noise! Next, specially-designed reflective optical disks have been attached to the shafts of each electromotor. Each disk contains a graphical representation of some standard audio wave-shapes. As the electromotors spin, the disks are set into circular motion, and each wave-shape is read by a dedicated set of UV (ultraviolet) sensors, then converted into an audio signal. So the wave-shapes on the reflective optical disks become precise musical notes, corresponding to the speed of the electromotors.

Unlike its initial proof-of-concept prototype predecessor, Motor Synth is a desktop design but it can still be played out of the box via eight built-in control keys and four floating tuning pots. 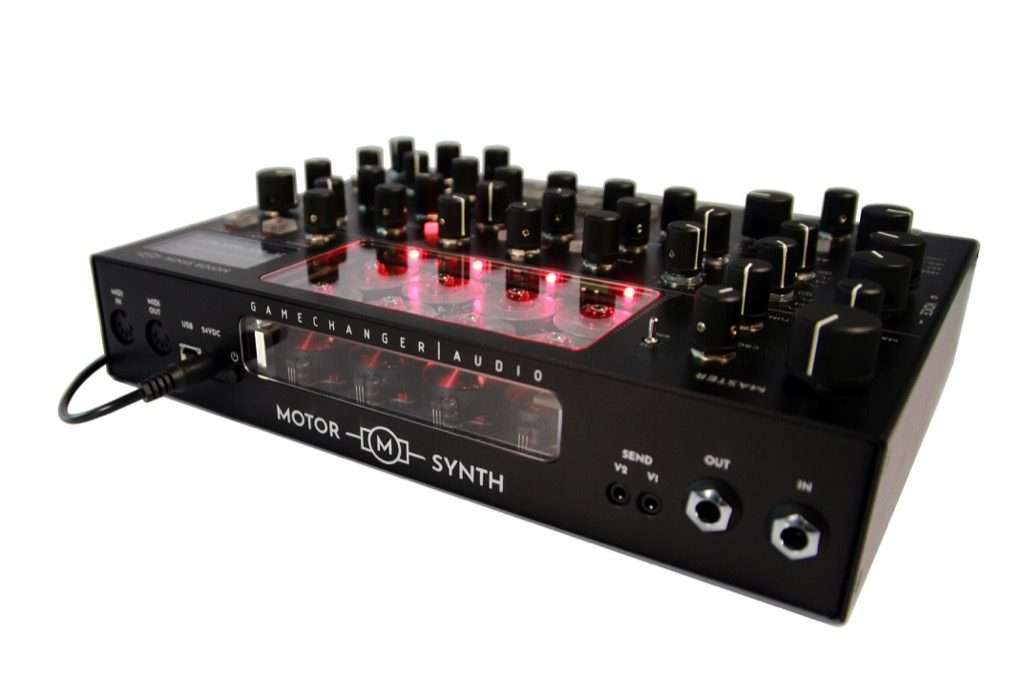 Performers and composers can connect any standard MIDI (Musical Instrument Digital Interface) controller, like a keyboard or DAW (Digital Audio Workstation), while Motor Synth is also capable of tracking a monophonic audio signal, such as guitar or bass, via its 1/4-inch mono input.

Motor Synth can also be configured to act as a harmonizer for electric guitars or other melodic instruments, recognising the pitch of a musical tone and instantly generating a complimentary tone by operating an electromotor at a matching frequency.

Furthermore, users can create intervals and chords based on the frequency of the incoming signal with no need (necessarily) for a MIDI controller or inputting preprogrammed musical information.

Whatever way anyone chooses to play Motor Synth, a stunning visual experience is guaranteed. Motor Synth’s see-through protective glass cover above its core sound system of eight electromotors enables users to receive visual feedback from the instrument itself by being able to see those spinning electromotors in action.

But better still, the visual experience is enhanced still further by the also-visible set of reflective optical disks attached to the electromotors’ shafts being coupled to a set of eight mini strobe lights, so those spinning disks themselves turn into a hypnotic light show, courtesy of the strobe effect! 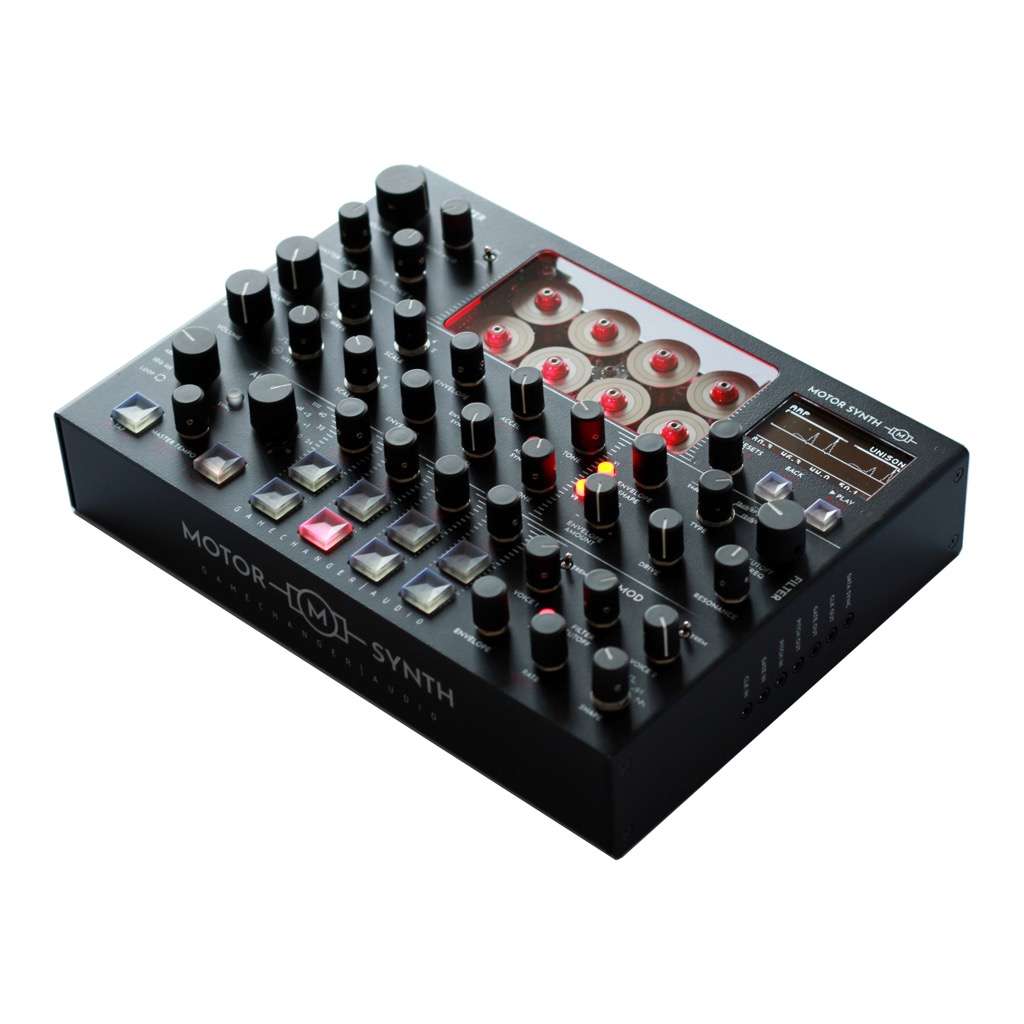 As an instrument that uses electromotors as its main sound source, Motor Synth inherently possesses many unique sound traits that will surely appeal to many musicians that favour analogue electronic instruments and synthesizers in particular.

With its unusual tonal and timbral qualities, unlimited microtonal pitch adjustment and modulation abilities, and note attack and decay properties influenced by the acceleration and deceleration curves of electromotors, Motor Synth works well across a wide range of musical styles.

Starting from May 28th, you can support the Indiegogo campaign for Gamechanger | Audio’s Motor Synth project here.