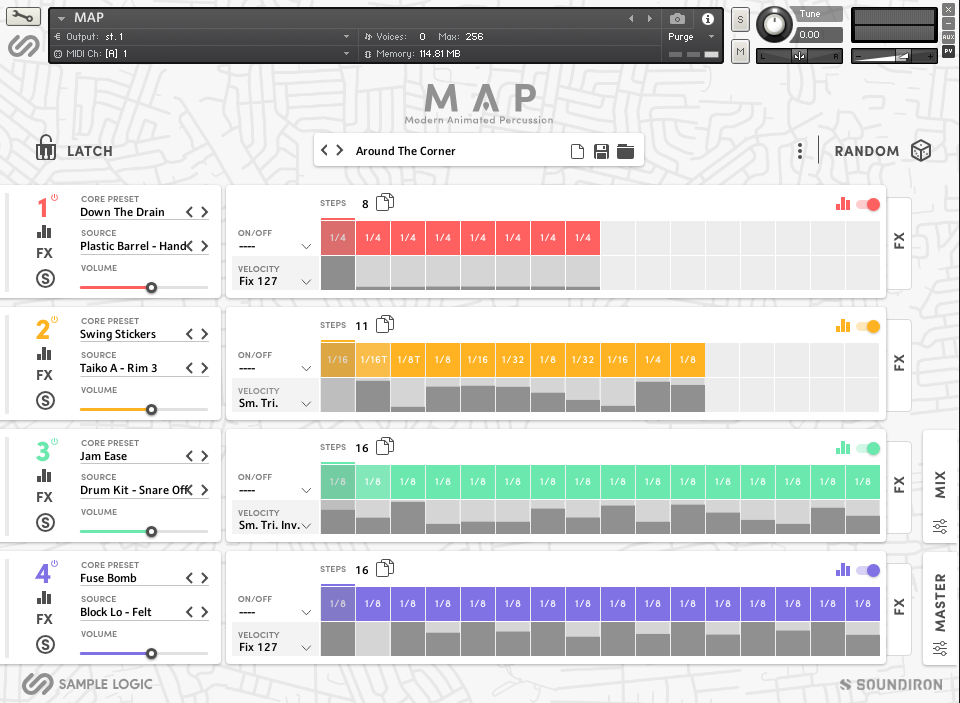 Modern Animated Percussion is a great new Kontakt library from a collaborative effort between Sample Logic and Soundiron.

It’s a sequenced percussion library designed for instant gratification percussive loops, with a wide variety of tones, atmospheres and genres, although as the name suggests it is aimed more at modern hybrid orchestral electronic sounds. It’s 5ish gigs of one shot samples, which is tens of thousands of one shots. These samples are divided up into multiple folders, and are accessible through a large descriptor menu that filters down your choices by genre, atmosphere, percussion type, and so on, until you arrive at a selection of sounds you were looking for. 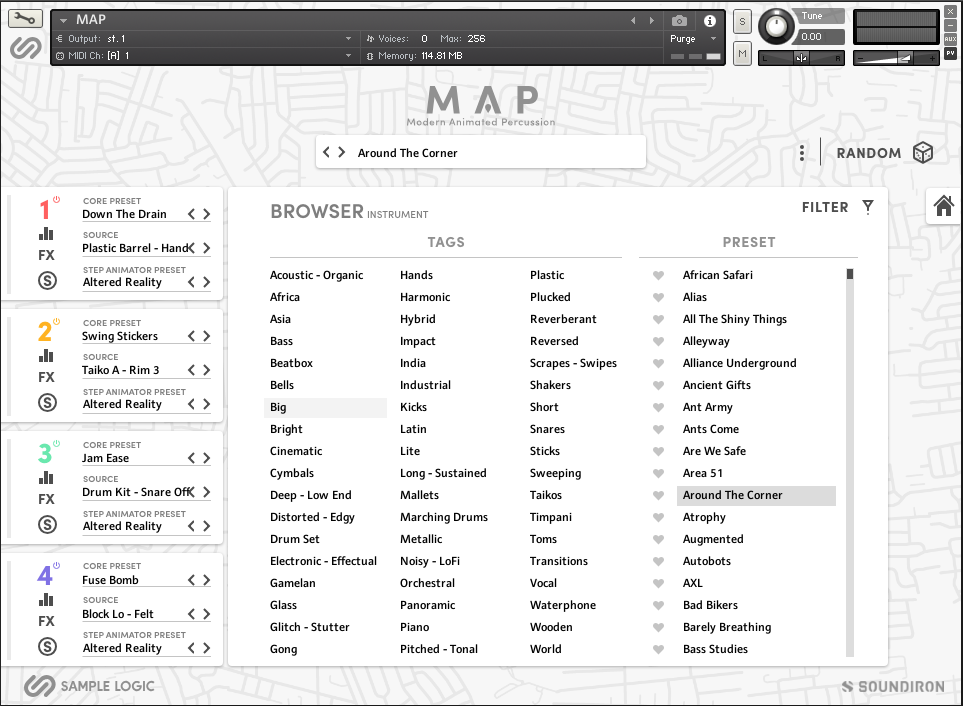 The sounds are of excellent quality, and offer an extremely broad range that goes well beyond the traditional percussion libraries, and even beyond the scope of percussion itself, with plenty of drones, basses, pianos, vocal yells and whoops to name a few. This gives loads of inspiration for rhythm creation. The sounds also range from small, intimate clicks and buzzes to massive Taikos and cinematic impacts that give you huge dynamic variety, making this library accessible for all different kinds of music that needs some pulse.

MAP does NOT consist of percussion loops – instead it’s a sequencer of one shots, which while potentially losing a bit of feel makes up for it with sound quality – whether the speed is 250 or 50beeps, it’s still going to sound top notch.There are 4 ‘cores’ or channels that can each sequence a different sound. There are several ways of creating the loops: you can load up one of hundreds of multicore presets, hit the random button and see what comes up, or you can build from the ground up, carefully choosing the exact sounds you want in each channel.

The sequencers are deep – you can independently change the length of each channel, to create some lovely polyrhythms. Each step can be a different fraction of a beat, so you can get very complex with the rhythm very quickly.

Aside from the actual notes, you can sequence velocity, length, pitch, and effects (of which there are many: compressors, reverbs, EQ’s and so on)You can also sequence glitch and stutter, to add contemporary effects to potentially more traditional sounding percussion. One thing that I couldn’t find that surprised me a little was any kind of swing or shuffle control. This means that everything is dead straight. For most orchestral work, that’s fine – you’re not needing it. But there are other applications this could be used for that would demand a bit more shuffle to the groove. 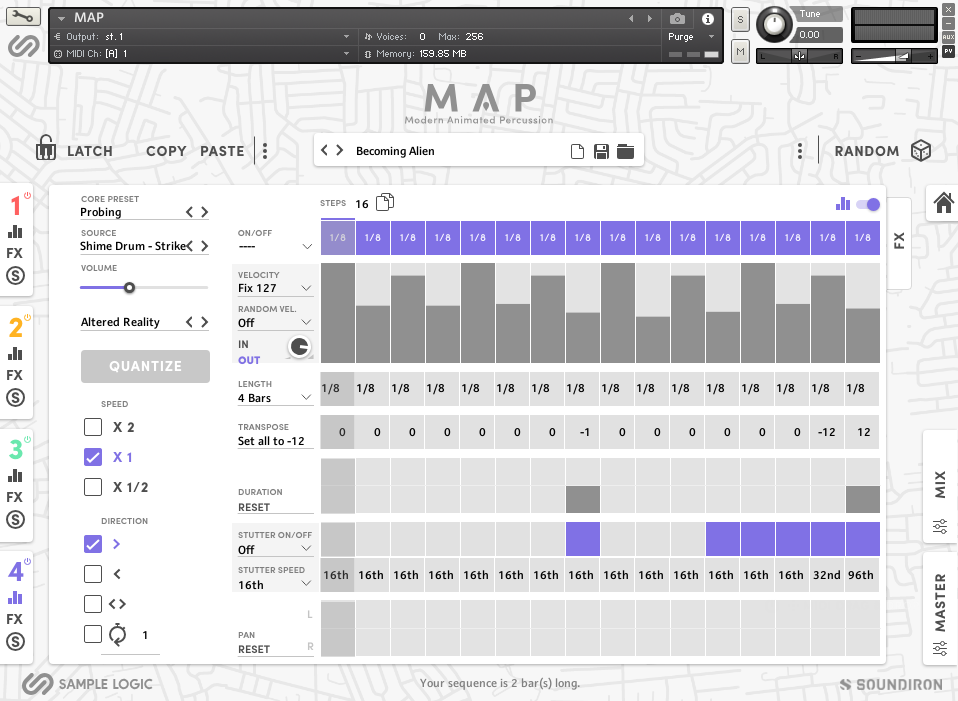 Sample Logic’s libraries have historically had an intense randomisation functionality. While this is good, the sheer amount of buttons to click have cluttered up the interfaces somewhat. They’ve sorted this out in this library, with a single button and an elegant drop down menu where you can choose what is randomised and when. This provides pretty much the same depth of control over the randomisation, but looks SOOOO much better. Great job. Also, the default set up they have on the random button leads to a huge amount of new interesting sounds, as they’ve got it set just right to change enough to keep it interesting to the ear, while still maintaining a coherence in the sounds and rhythms created. Very inspiring!

P.S. DON’T FORGET TO BATCH RE-SAVE!!!! It saves you a ton of time, and the third time you’re sitting there for 5 minutes while the library loads, you’ll be kicking yourself!!! Do it!

Here’s a quick performance using several instances of MAP to provide all of the percussion, and some of the drone sounds in the piece. I tried to work quickly as if I were writing for quick turnaround on a cue.

And here it is naked (just the MAP stuff)

As per usual, Sample Logic have come up with a killer piece of software that would fit into a composer’s library sweetly. It fits the ‘percussion bed’ niche very nicely – although the library is composed of thousands of one-shots, I feel that it is set up to be used as a loop sequencer, rather than playing directly (via midi). I would definitely use it as a complement to the other percussion libraries I have. The sound quality is excellent, and I was really impressed with the ‘Random’ functionality: it’s been simplified a lot from their last products, and it just seems to create really nice fresh loops with every click.

Sample Logic has a tasty introductory offer of $250, after which it goes to full pricing of $350, so grab it, or find out more info on the official web page.

Note that MAP is set up for the FULL version of NI’s Kontakt, and it won’t work in the free player.