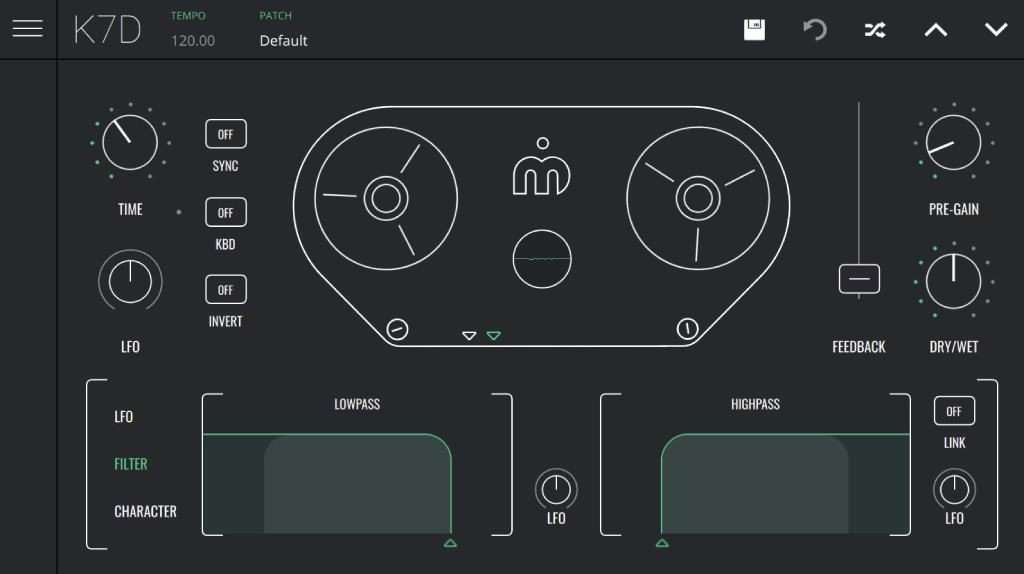 Over the past few years, Portugal-based Imaginando has created an intriguing, good-looking small catalog of software tools (ranging from Live & Traktor controllers to the powerful DRC polyphonic synth), but for one reason or another, I had never been able to spend some quality time with them for ANR. Until now, that is. I’m a sucker for tape delay-style effects, so when I heard of Imaginando’s new plugin/app, K7D, I couldn’t miss out.

In the company’s words, K7D is an audio plugin designed to simulate a tape delay effect, recreating the characteristic sound of classic hardware tape machines, with some modern modulation features, giving the possibility to achieve a mix of modern and vintage sounds.

For those of you who are not yet familiar with tape delays, here’s how they work in a nutshell. The musician’s performance is recorded by the recording head, then it passes through the playback head milliseconds later creating the delay effect. The distance between the recording and playing heads represent the delay time. There are some extra factors that make these delays particularly interesting, such as the magnetic tape’s wow and flutter, the rolled-off high-frequency response and increased distortion with each repeat.

K7D is available for Mac, Windows and iOS. It comes with a sleek, minimal interface (thumbs up!). The interface consists of a status bar on the top, the main panel with common delay parameters along with three tabs on the bottom for modulation, filtering and character manipulation. Basically, you can’t go wrong, since everything is pretty intuitive.

I decided to test K7D with a quality sampled electric piano. Why? Well, I needed a solid yet portable Rhodes+effects setup with an out-there touch. I had previously given the popular Yamaha Reface CP a try, but the sound never did it for me (if you ever had a chance of having a real Rhodes you’ll probably agree).
On the contrary, I’ve always been a big fan of Scarbee’s Rhodes libraries, and I also have his add-on library for the KORG Module iOS app (which in my opinion blows the Reface CP sound out of the water). So I thought, ok, let’s add K7D to the mix and see how it goes. I fired up the KORG Module + K7D combo (via AUM). FYI: being this meant for an extremely portable setup, I opted for an (old) iPhone rather than an iPad or a laptop. K7D runs just fine on an iPhone 6s (even though you’ll likely squint your eyes!).

So, how does it sound? After fiddling for a few minutes with the app’s controls, everything fell into place. It is obviously still ‘just’ an emulation of a Rhodes + tape delay setup (nothing beats the real thing), yet a warm sounding and very convincing one. K7D feels very well-thought in all its aspects (the LFO is a very nice touch, and you can apply it to the filter as well) and overall very ‘musical’.
The Pre-Gain control can add a nice crunch (try it with some beats!) and if you love playing with the stereo image of your tracks, the Character tab offers some effective ways to do that. Plus, the plugin/app comes loaded with some helpful presets, which doesn’t hurt.

If you love the unique vibe of those (now awfully expensive) classic tape delays, I wholeheartedly recommend checking out Imaginando’s K7D. At a fraction of the price, you get a well-designed, easy to use, great sounding piece of software that will give your tracks ‘mojo’ for days. The only thing I would add is a sort of ‘tape age’ feature. It would be cool to be able to switch between a pristine reel and a worn out one (for a ‘dirtier’ sound), but for the price, I sure can’t complain!
Personally, I feel like K7D is a must-have on iOS and might become a trusted friend of mine on my Mac-based desktop setup, alongside some of my favorite effect plugins such as those from Valhalla, Eventide, Soundtoys, etc.

K7D is currently available with an early-bird discount of 50% valid until May 19. The current price is 3.5 EUR for iOS and 19.5EUR for Mac/Windows systems. After May 19, the price will be set at 6.99 EUR on iOS and 39 EUR on Mac/Windows systems. Learn more and buy K7D on the product web page.