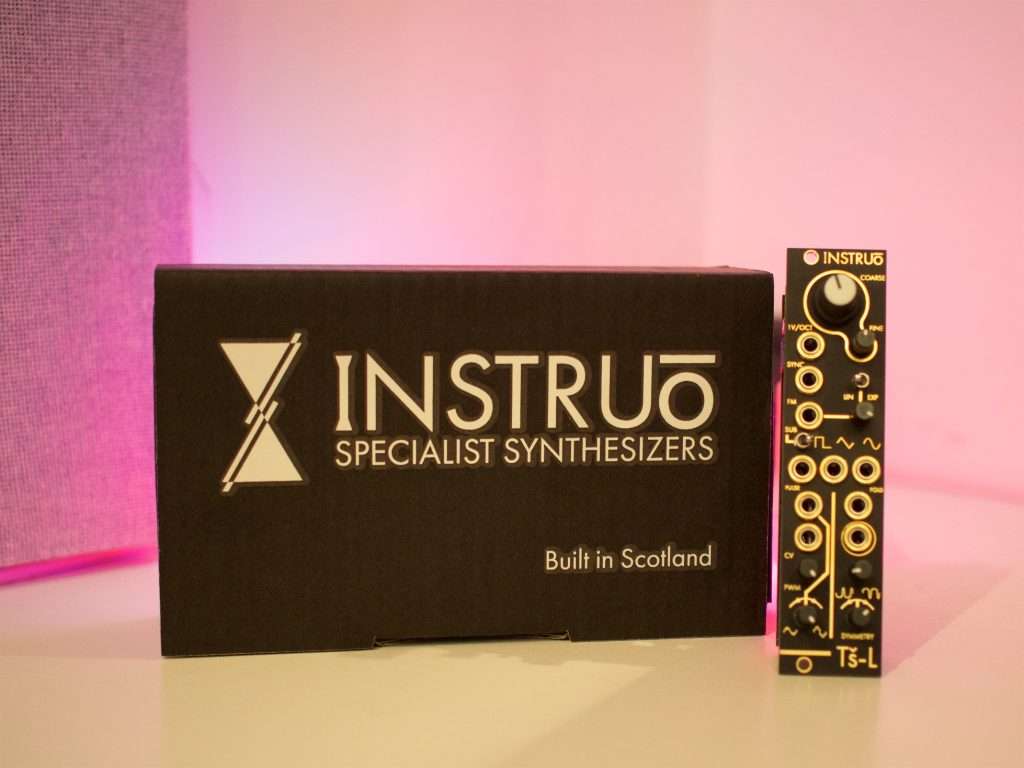 The TsL is a powerful multi-output VCO in a comparatively tiny 6HP. Firstly the current design for the Instruo modules is hands down my favourite of all the modules out there: Super classy gold lettering on black background. A ‘shared’ system of multiple Instruo Modules ala Make Noise would look absolutely fantastic! A metal faceplate solidly rounds out the design.

The TsL is a triangle core VCO. There are Triangle, Sine and Square wave outputs, a wavefolder output, and a PWM output, giving you 5 concurrent sound sources to blend or divert down different modular rabbit holes if you so wish.

The Square wave is a sub, and starts down an octave from the other waves, but with a flick of a switch can drop a further octave. This, complete with an attenuatable FM input with linear and exponential curves gives plenty of options when exploring sonic frontiers. 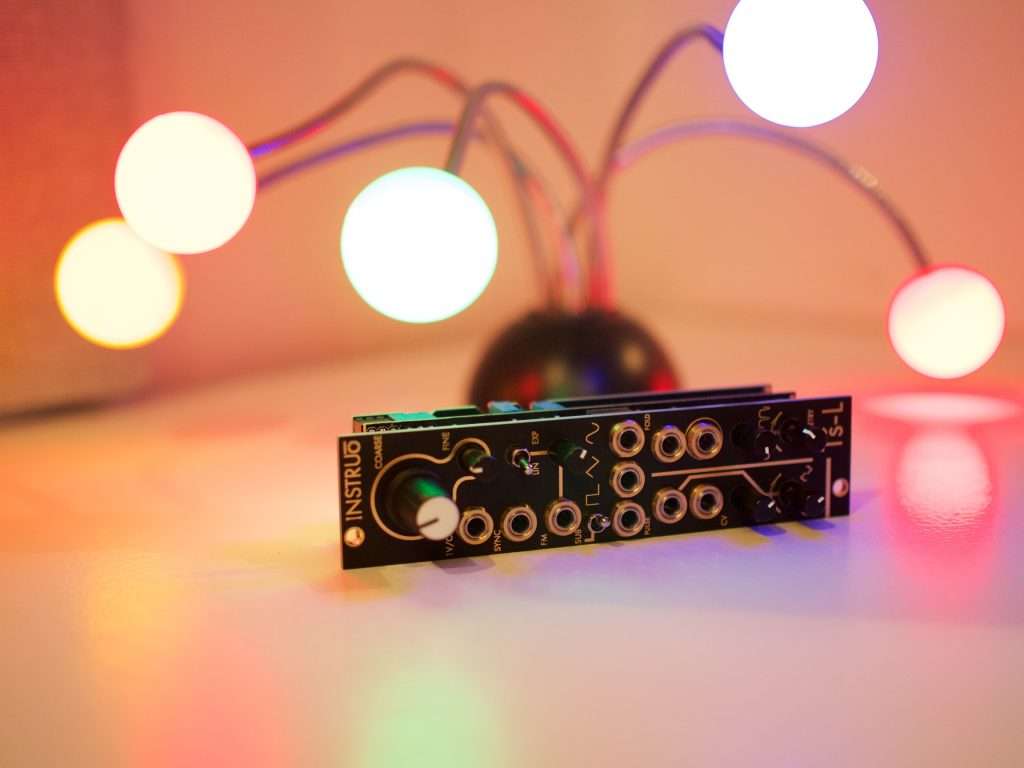 The wavefolder is a sine wave, with a CV modulatable fold. The process of Wave folding is a very complex mathematical process, way beyond my scope, but essentially it’s a wave amplitude increase, where instead of just clipping, a comparator inverts the waves, or folds it in on itself, hence folding.

This is a lovely way to add harmonic richness and spectra to a sine wave. It’s a form of wave shaping, but without the crazy harshness and abrasiveness.

This is an unusual kind of double pulse width. I’ve personally not heard it before. There are two waves you can crossfade between: a split triangle and double pulse square wave. and a CV’able pulse width. It definitely sounds like PWM, but to me it feels a little more soft and subtle in the way it changes timbrally.

There’s a soft sync input, of which I believe there are several different technical types out there (Either way, it makes a richer harmonic) and an FM input, with a linear and exponential switch to change the range of the modulation. Perhaps my favorite aspect of this FM is that there’s an attenuator on the input, so you can have super subtle blends of FM to the original wave if you want.

Eurorack can quickly suck up space in your studio/bedroom/toilet, which can quickly lead to frosty looks from your other half as the walls disappear in a nest of wires. For squeezing as much as possible in as small hp as possible, and thus potentially lessening relational issues; Jason Lim I salute you!

The one downside to this downsizing is that it can be a little tricky to get at if you have fat fingers. I placed the module on the bottom of the rack, and I would probably have it higher up, so I could access the small knobs at the bottom more easily. Also, if you have both the square wave and FM patched, it’s almost impossible to switch octaves.

But this downside is minimal compared to the quality of sound, build quality, and space saving you can achieve with this module.

The TsL is a fantastic VCO if you’re starting out on the Euro train, as it’s very much a ‘what you see is what you get’ module, with basic waves instantly accessible. The sound quality of the waves are super clean, tuning is excellent all the way up and down. No qualms here. Plenty of harmonic interest mixing those sources. But then, once you’re used to working with simple waves, and want to step up the harmonic interest levels, you’ve got the wavefolder, PWM, FM and Sync. All excellent, all squashed into a tiny space!

I particularly liked the FM attenuation with linear/exp switch, and the wave folder with symmetry. Being able to have so many tones to send out and mix truly gives this small module a flexibility not many others can match. It’s hard to compare modules, as every company puts their spin on ‘standard’ modules, but I would place the TsL alongside the esteemed company of Make Noise STO, Befaco Even VCO, and Doepfer A-111 series. For the depth of capability to size ratio, I think the TsL wins out easily.

I made a quick track for one of my Instagram pages: 1minmus. I used the TsL sine out as a percussive tone, running it through a delay module, and the Triangle I ran through Clouds, and tweaked to get those FM type rising sounds.

Instruo is definitely boutique – it’s built in batches. If you’re interested, get to the website now and register your interest! TsL is priced at £250, and well worth it, in my opinion.