A couple of months ago, we introduced 2getheraudio, a new music software with a peculiar business model, offering customers to pay what they can afford while half of that purchase price goes to a social cause of their choice.

The first two plugins from 2getheraudio are RE4ORM, an Additive Synthesizer virtual instrument, and RE4ORM FX, an Audio Shape Remixer effects plugin.
I spent some time with these two plugins recently. They are both very intuitive, but they also offer some interesting features that make them appealing even for more advanced users.

RE4ORM kinda reminded me of my early days with Camel Audio’s Alchemy (later sold to Apple and ‘reshaped’ within Logic Pro X). I’ve enjoyed creating some experimental electronic textures and drones with RE4ORM, thanks to its smart modulation system. 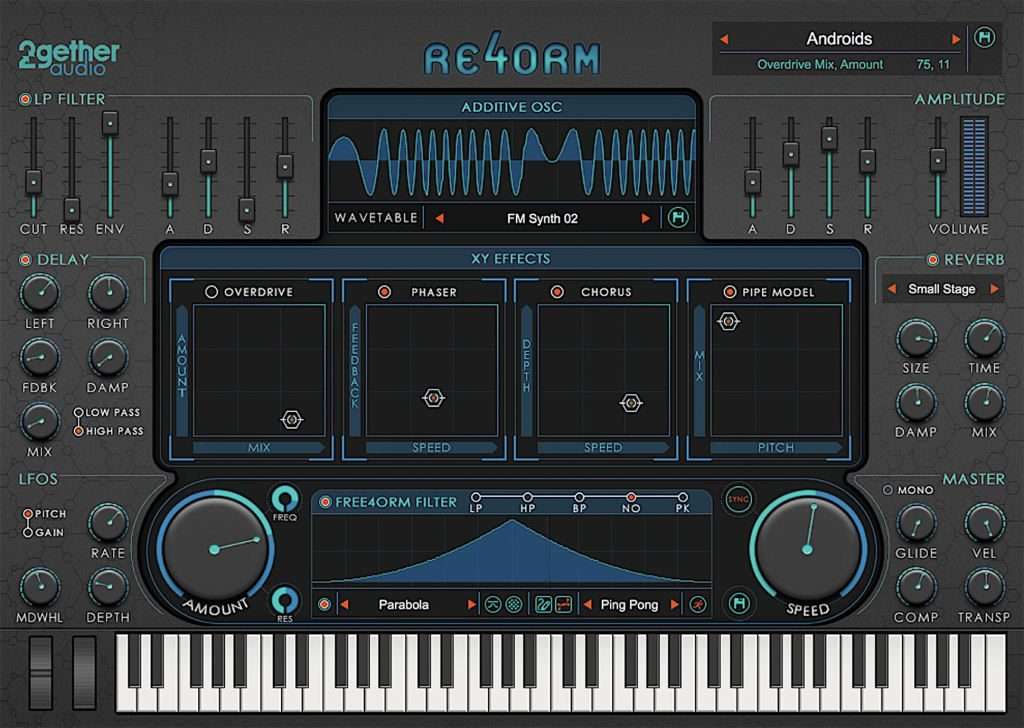 RE4ORM’s workflow is straightforward (I like the fact you can also draw your own waveforms!), and it’s very easy to come up with some inspiring sounds.
I would recommend this synth to those of you looking for a quick-to-use yet creative plugin (if you’re into soundscapes, you’ll love it!).

RE4ORM FX adopts some of the same technologies found in its sibling (they share the same architecture). It offers the above-mentioned modulation system plus the following effect modules: two filters, distortion, formant, pipe model, delay and reverb. The automated modulation possibilities make it a very dynamic sound-shaping tool, especially useful for beatmakers and producers who would like to spice up their tracks.

Last but not least, both RE4ORM and RE4ORM FX offer a great selection of (carefully designed) presets, a great starting point to explore the possibilities offered by these plugins.

RE4ORM and RE4ORM FX are available for download now. There’s also a trial version, and if you like what you see you can pay the full price or what you can afford (with a super reasonable minimum set price). Upon purchasing the items, you get to choose among a number of social causes (Red Cross, Cancer Research Institute, etc.).

An Interview With Jennifer Hruska

I found 2getheraudio’s approach very interesting, and I thought it’s worth finding out more about it. For this purpose, I (virtually) sat down with Jennifer Hruska, ex Kurzweil, Sonivox, Akai and now CEO at 2getheraudio…

Charity + name your own price + audio plugins: we’ve seen some isolated examples in the past but never a fully focused project like this. How did the idea take shape? How’s the response been so far? 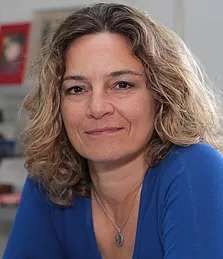 Like many people in the world today, myself and fellow 2getheraudio owners have become increasingly aware that individuals are going to need to step up to help solve today’s social and environmental challenges – rather than wait for governments that is, because they are so polarized these days. But how do you do this when you’re busy working, making music and living your life? Our answer was to offer a way for musicians and producers to make a charitable donation while getting the music making tools they need. So when you purchase a 2getheraudio plugin you choose from a selection of charities and 1/2 of what you pay goes to that charity. The pay-what-you-want piece of it was about making sure anybody, regardless of their ability to pay, to be able to participate in this. In fact, we’ve seen studies that show that people who have less income tend to give more of it away to others. Not surprising really. Musicians have always been a generous bunch.

Please tell us more about the team’s background. You are certainly not the new kids on the block, to use an understatement…

Yes, the three of us have certainly had the great fortune of building lots of cool music software and hardware over the years! 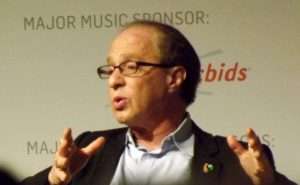 I had my start back in the late 80’s working as a soundware engineer for Kurzweil Music Systems with Ray Kurzweil, Bob Chidlaw, Hal Chamberlain, and even Bob Moog for a short while. That’s where I really cut my teeth and learned audio engineering. These were really smart guys and I only had a music education degree so I had lots of learning to do in those days! This is also where I met Rick Cohen, co-founder of 2getheraudio. He was a software programmer at Kurzweil Music Systems for many years. After his years at Kurzweil he went to work for Synthogy on their great piano virtual instruments, and a game company called First Act, then came to SONiVOX for a number of years. He’s an amazing programmer and an excellent musician as well!

In the early 90’s I also left Kurzweil to join a crazy band in San Francisco called D’Cuckoo. It was out there I founded SONiVOX where in the early days we sold sound libraries, then did a 10-year stint building and licensing MIDI synthesizers to cellphone companies and semiconductor manufactures for ringtone playback of all things! 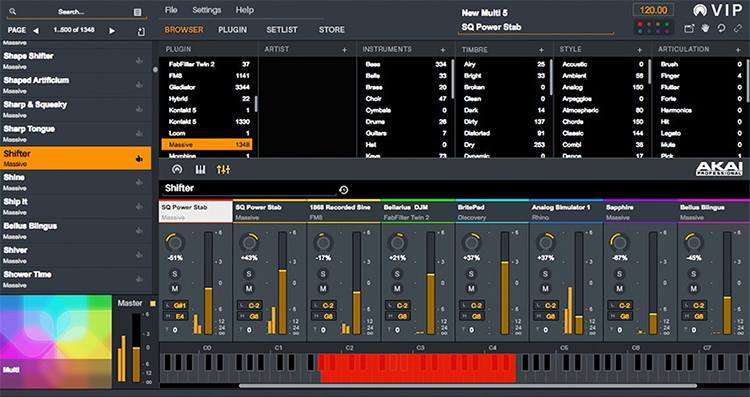 At ANR we’re VIP users, too!

After that ran its course we went full steam into virtual instruments and made some great products which are mostly still available today. I sold SONiVOX to inMusic Brands (Akai, Alesis, Numark, and that family of brands) in 2011 so I could focus more on my own music, but first I had to work for them for a few years which ended up being really great! It was nice to get back to building hardware synths again. My big project at inMusic was Akai’s VIP software. This is where I met Patrice Tarabbia, our other founder of 2getheraudio. He came up with the idea behind VIP and wrote most of the code for it.

Prior to his work with Akai, Patrice founded and ran Big Tick Audio where he produced some very popular plugins and excellent technology, some of which has found its way into 2getheraudio products.

And finally, that brings us up to the 2getheraudio! The three of us started building the synth technology which powers 2getheraudio plugins about 3 years ago. We named this struQture because it is very modular in nature and we can build many different audio structures from it. In fact, we’ve barely scratched the surface of what we can do with this platform. So now comes the fun part, building more instrument and effect plugins for customers.

In the music tech industry, it’s (unfortunately) not common to find a woman CEO. Jennifer, can you tell us more about this from your vantage point? Do you think things are getting better or … is it “the song remains the same”? 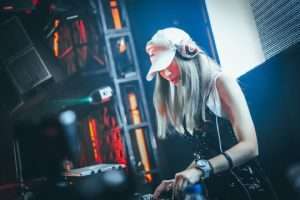 Yes, I’m not sure why but there still aren’t a lot of women running music tech companies. That said, I am seeing many more women artists using music technology and so I think its just a matter of a bit more time before women start founding and running some tech companies. People talk a lot about “why aren’t more women…” doing this or that. But people have to remember we are also still the primary caregivers in our families (although we love our male counterparts who are awesomely involved now!). My point is just that, it’s a time management issue as much as anything else!

I think in the past it was somehow easier for audio developers to stand out with their products. Now, we have DAWs that come with a smorgasbord of sounds and effects for the price of a quality plugin. Plus hardware music production tools have never been as cheap as today. Given your long-term experience in the industry, what’s your take on this?

The music software business is definitely crowded these days and so inevitably a price war begins and quickly brings the prices down on everything. The race-to-zero we call it. This certainly makes it hard for small company’s such as ours to make a living. But the other side of this coin is that the industry itself has grown by leaps and bounds in my 30 years in it. And this is a great thing! The fact that almost anybody can afford to make great music in their bedrooms is a very amazing and powerful thing. I wouldn’t give that up for all the revenue in the world. Power to the people baby!

Ok, enough with business, let’s talk music: what do you guys listen to when you’re at home (or even in the office)? And if you have active music projects, would you like to briefly tell us about them? 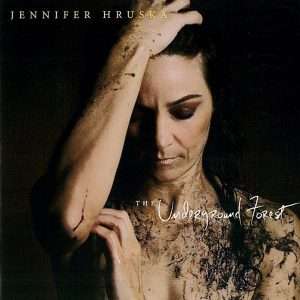 Sure! One of the nicest things about having your own company is you can carve out time to make music. I’ve done a variety of music projects over the years including a self-produced CD called The Underground Forest which is based on stories from a well-known book by Clarissa Pinkola Estes called Women Who Run with the Wolves. These days, however, I’m playing lots of jazz piano in the Boston area where I live. It’s very casual and local and a ton of fun. Interestingly, Patrice is also a jazz pianist and plays quite a bit in the New York City area where he lives. Rick is also an excellent musician and plays guitar and keyboards regularly with a Beatles tribute band and a Beach Boys tribute band. He recently did a few of gigs with Brian Wilson himself even! Making music is an important part of who are as a company. It feeds our souls and keeps us in touch with our customers’ needs at the same time.

What are your plans for 2gether Audio? What can we expect from you after the first couple of plugins you have released? Possibly something in store for more advanced users?

Yes! We’ve got some great new stuff coming very soon. Look for two new plugins by then end of the year plus a very useful VST editor for a popular Korg synth which will be a welcome addition to people’s studios. We’ve also got new expansion packs forthcoming for RE4ORM, RE4ORM FX and even some expansion packs for 3rd party plugins which are using our synth engine. Folks should sign up on our email list to stay informed!