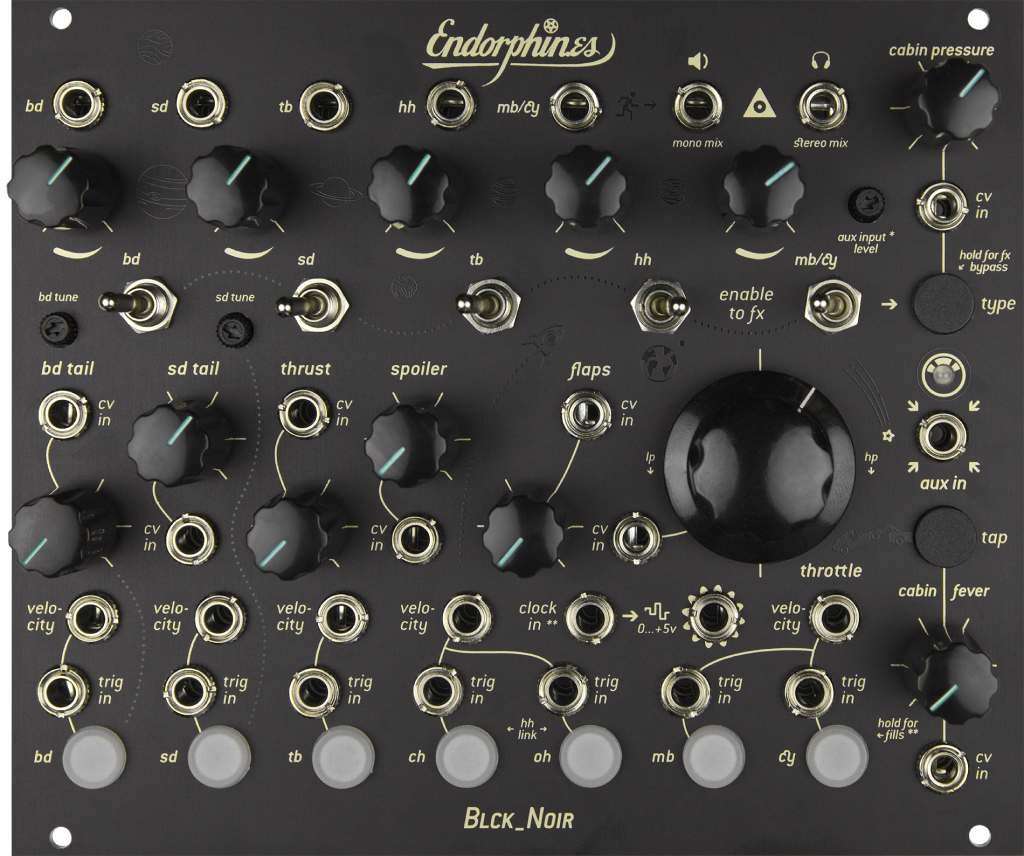 BLCK_NOIR was made with dark electronic music in mind – strong live performance features, vintage flavour, limited in some ways to maximize the usability, suitable for various styles of music – from Electro to Hip Hop, Synthpop to Industrial and Complex Techno.

Inspiration for this module was the genre Minimal Wave and a few special artists:

AS BLCK_NOIR is a drum generation module, it requires a running sequencer or trigger generator. Alternatively, you can use any MIDI sequencer, groove box, drum machine or DAW using MIDI to CV/GATE converter.

7 drum voices are grouped into 5 channels:

Drums are triggered by applying analog pulses/gates into corresponding trigger inputs. Every drum channel has a CV VCA controlled velocity input, which defines the amplitude (volume) of the drum channel.

Audio outputs are located at the top of the module. Connecting any cable into individual drum channels will disconnect them from final output. However, you can always return them to final mix output via auxiliary input.

Module features a THROTTLE – bipolar, DJ-isolator-style filter cut-off control that applies to the final outputs: mono and stereo. It is 12 db/oct zero-delay state-variable filter. FLAPS is the resonance control of that filter and functions as a tone control for the output.

Bass drum and snare drum have tuning controls as well as CV controls over decay. The other 6 drums (SD, TB, CH, OH, MB, CY) share two noise generators: white and metallic. The shape of those generators is adjusted with THRUST and SPOILER knobs. These two controls are applied to all noise sources at once.

When CLOCK applied, each drum button becomes as a fill/roll live performance button that combines fills from the clock input together with separate drum trigger inputs.

Each of the five drum voice groups can be separately routed into the effect processor by turning their toggle switches to the right position (click-less).

CABIN PRESSURE SCAN: by pressing and holding the TYPE + TAP buttons simultaneously for longer than 1 second, you enable the effect type change under incoming CV. Meanwhile scanning, each effect will have own settings which are storing in the memory.

The company also announced a future firmware update that will replace the 8 effects with 8 drum-oriented ones.