iOS music apps are great for electronic styles of music but so far realistic drum sounds and other acoustic instruments tend to be few and far between. With the exception of iFretless Bass and some passable basses in GarageBand current Bass guitar offerings struggle to avoid sounding more like a 90s synth version of a bass than a real instrument.

Developer Luis Martinez of LumBeat has managed to carve out his own niche of very realistic sounding drummer replacement apps. He has released a series of apps that focus on quality sampling of real drum sounds combined with a simple interface for quickly creating varied and human sounding beats.

Rock, Funk, Afro Latin, Brazilian, Soft(Jazz), Mid East and Future Drummer Apps all feature great options for humanizing beats such as fills, swing and jam intensity. The Jam Intensity control is what really sets the LumBeat apps apart as it adds some randomness to the playing style so that the drums no longer sound like drum loops. 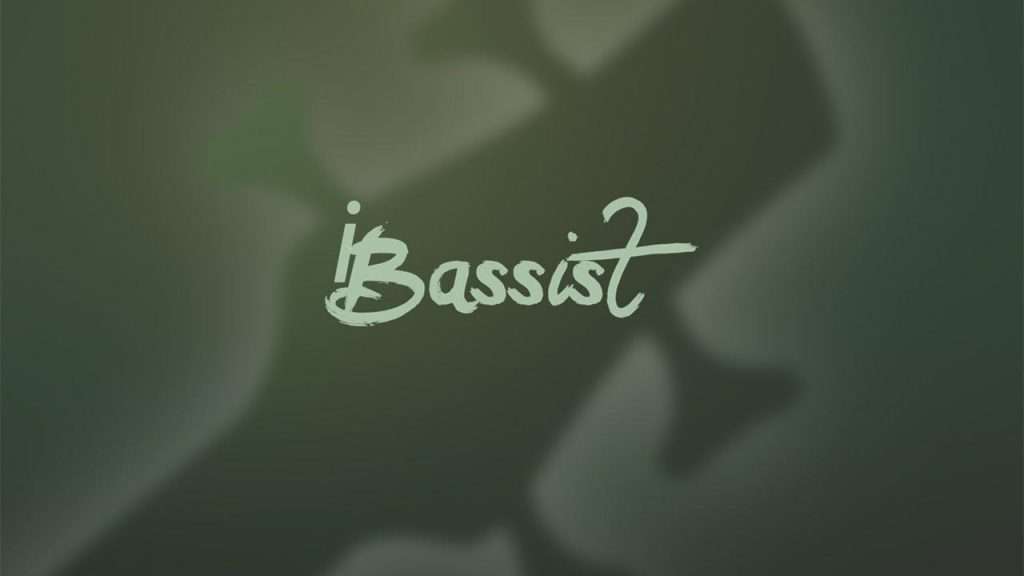 iBassist ($17.99) is the first app in the series that focuses on an instrument and aims to provide realistic and flowing basslines. This is no simple task. Although sampling a bass sound is simple, making those samples play in a realistic way is undoubtedly not.

The app’s interface will be familiar for anyone who has used the other LumBeat apps. There are many pre-programmed patterns that can be arranged in chord sequences and played on any of the ten bass sounds ranging from funky Slap Bass to a smooth sounding acoustic Double Bass. 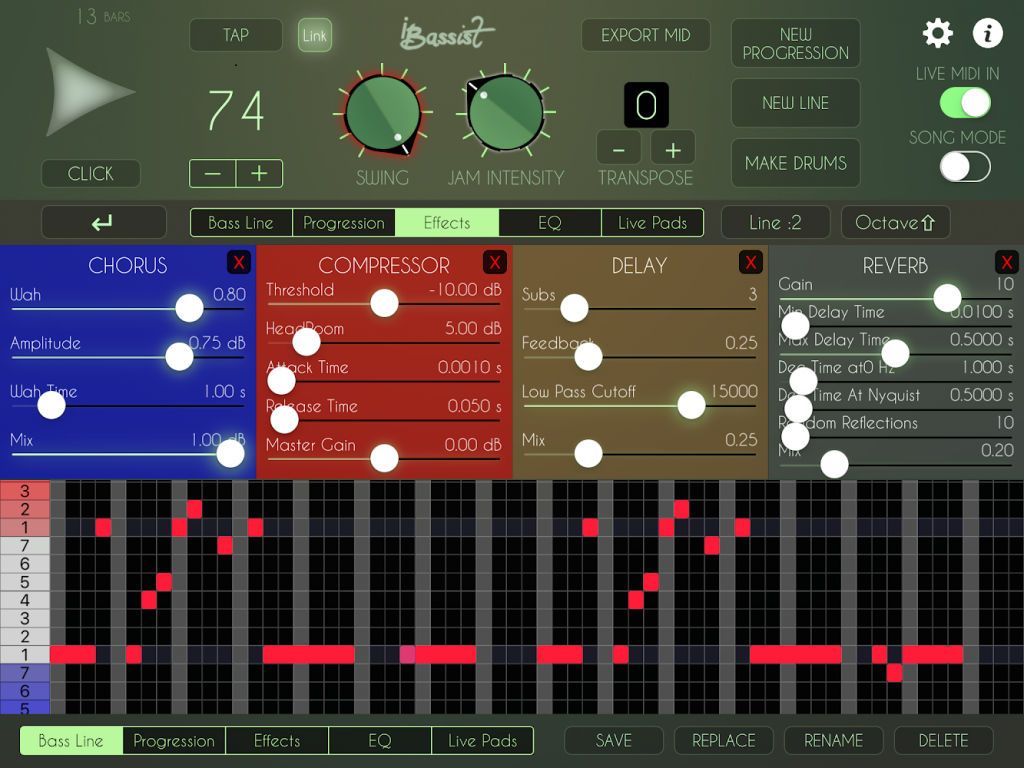 There is a great effect section which has a nice modular interface. The Compressor, Delay, Chorus and Reverb can be added in any combination in the four effect slots. Do you want your bass through a chorus followed by a chain of three reverbs? Knock yourself out. Another great feature to the effects is that their order can be rerouted with a simple drag and drop. There is also a separate four-band parametric EQ to further dial in your sound. 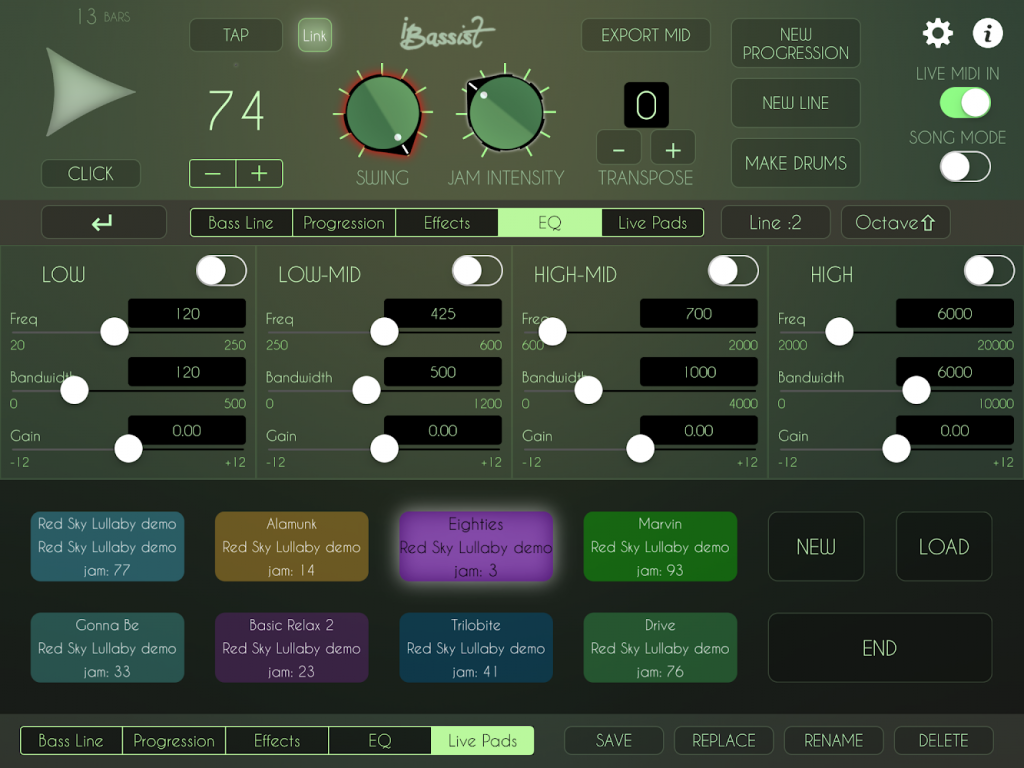 iBassist does a pretty good job of approximating a bassist. Playing straight sequences iBassist is probably not going to fool a professional bassist in a blind test. With a little bit of savvy production however, perhaps some chorus and delay and upping or varying the Jam Intensity iBassist sits nicely in a mix. Assuming some creativity in the way it is used it would likely not be noticeably artificial to the ears of the average listener.

In the video below I have used iBassist to build up a bit of a Pink Floyd alike Jam along with Funk Drummer, Soft Drummer and other Apps.

Another great feature is the built in interconnectivity with the other LumBeat apps. The “Make Drums” button instantly brings up a menu allowing you to jump across to any of the Drummer apps you may own and easily keep in sync via Ableton Link. From there you can tap the Create button within the drum app until you find a beat that works. iBassist also allows you to export midi so you can play the bass lines on a synth or create layered hybrid acoustic/electronic bass sounds. The Chord Detection mode makes creating bass lines to match an existing chord progression even easier you can press the record button and iBassist will start playing when it detects a chord from the Midi input. There is also a useful Song Mode for structuring the different sections of your composition. 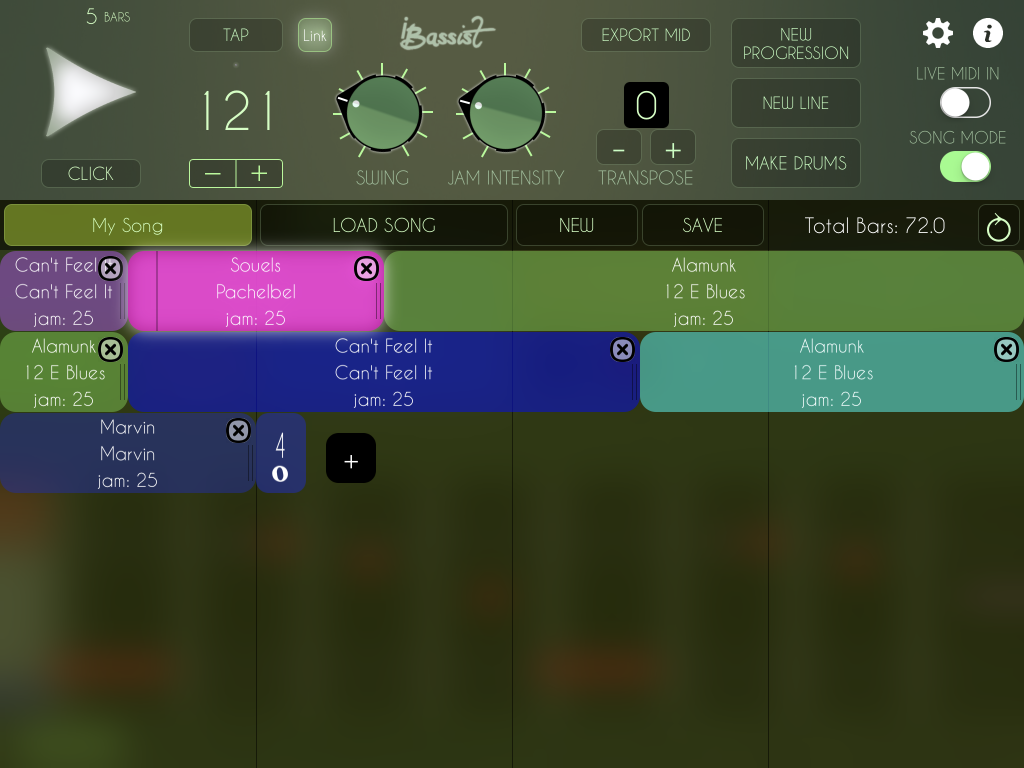 iBassist is good but there are some areas it could develop further. Some of the samples can have some abruptness to their transitions with some clickiness on certain tempos and styles. There is a Click level in the settings but the overall smoothness could perhaps be resolved with some adjustable Attack, Decay, Sustain, Release (ADSR) controls. This would add to the creative possibilities of the App and if the Jam Intensity could also vary those ADSR settings within a sensibly assigned range this might also add further to the realism of the playing.

Overall iBassist ($17.99) is a unique and useful tool for any music producer. It is capable of fulfilling Bass duties for a wide variety of musical genres. LumBeat has crafted an App with an interface that is intuitive and simple but the sonic results possible are realistic and varied.