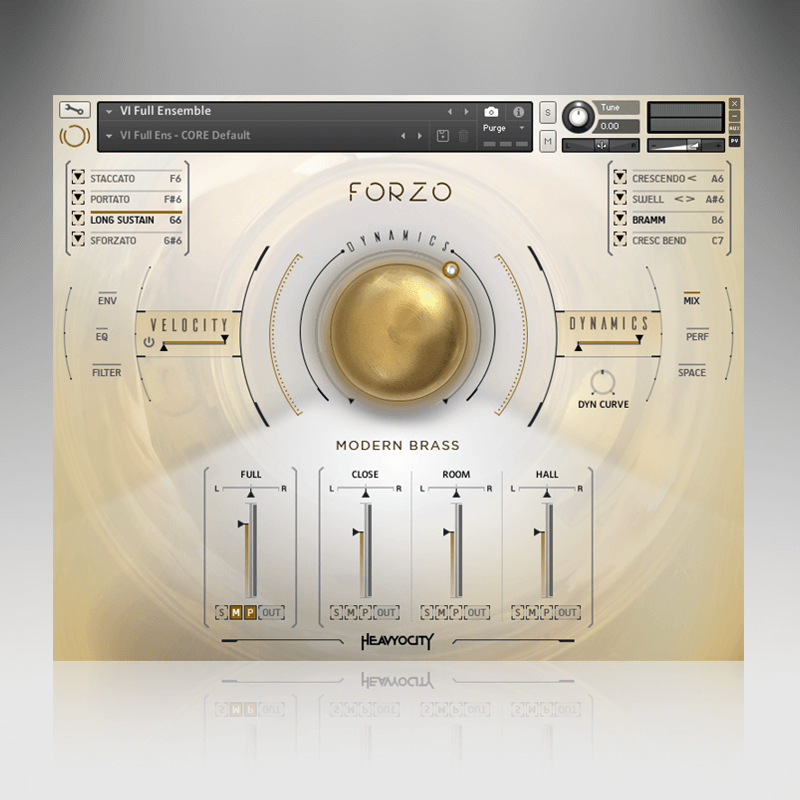 Cons:
– Not your cup of tea if you’re looking for soft, pastoral sounds

Heavyocity is a collective of professional composers and sound designers with a mission to create world-class virtual instruments for today’s modern composer and sound designer. Their philosophy is simple: Provide cutting edge, inspiring instruments and sounds that supercharge creativity, formatting them in ways that enhance productivity.

When I listen to Heavyocity’s libraries, the word Hybrid is one that I feel characterises them best. They have a big pro following, with heavy hitters such as Mac Quayle, Vernon Reid and Mark Isham all endorsing their products highly.

And so to Forzo – the latest orchestral addition to the Heavyocity stable. A heavyweight library weighing in at 25GB, recorded at the awesome Skywalker sounds studio, with well over 10K samples and several hundred presets to whet the appetite. The library is divided up into 2 sections – one of the traditional brass sections – French Horns, Trumpets, etc etc; the other section is a hybrid loop and texture engine that enables the creation of sounds and rhythms that cross the boundary between traditional instrument, and sculpted tone – giving a massive scope to create some astounding sounds.

Forzo is built for Kontakt, and it is scripted fantastically. Everything’s there on one page – with different elements available at a click. I liked this approach. It’s built for a fast workflow, which is essential to the modern day composer. More on that later.

I was massively impressed with the sounds coming out of this library. It’s very definitely aiming at a solid niche of DRAMA DRAMA DRAMA – it’s not that subtle in that aspect. The dramatic brass sounds of Transformers movies, with those absolutely HUGE bass brass sounds. And wow does it not disappoint. The sound is just gorgeous. I thought I’d heard brass tones that were good enough, but these absolutely top the list. They’re weighty, bold and round in tone, but I never thought they got unintentionally raspy, or thin, as I find with some other brass libraries. There’s a stopped Horn section, which has to be very well recorded to not sound like a cloud of mosquitos. But it sounded smooth. Delightful. Every sound was eminently usable.

There are 3 mix positions to work with, and one FULL mix position, which is a pre-mixed version, which when added, just makes a MASSIVE sound.

I KNOW, I’m using a lot of caps in this review, but the sound requires it really. Each section has several articulations that you can switch between, from sustains and staccatos, to really cool atonal clusters, swells, and some rad excursions into more sound design-ey (while still being instrumental) pulses and flutters, that give a pointillistic textural sound of notes popping up all over the stereo image. Really beautiful sounds, and a lot more usable than other libraries ‘FX’ patches.

Forzo is also definitely capable of lowering the intensity somewhat, and giving a sweeter, more subtle tone; the ‘ppp’ patch being a great example. As you raise the dynamics, instead of getting much louder, it instead gets breathier – with more air becoming part of the sound. but I don’t think that’s the forte of Forzo. There’s also no legato, which adds a lot of depth to the composer’s palette. But it doesn’t matter, because that’s not what Forzo’s for, and you don’t feel like you’re missing it.

Coming back to what I said at the beginning, Hybrid is the word that characterises Heavyocity best. Forzo’s massive strength is the space between traditional instrumentation and synthesis; giving fresh sounds from recognisable tones. The second section of the library is the one that covers this space, and it’s with two instruments; brass designer and brass loop designer. 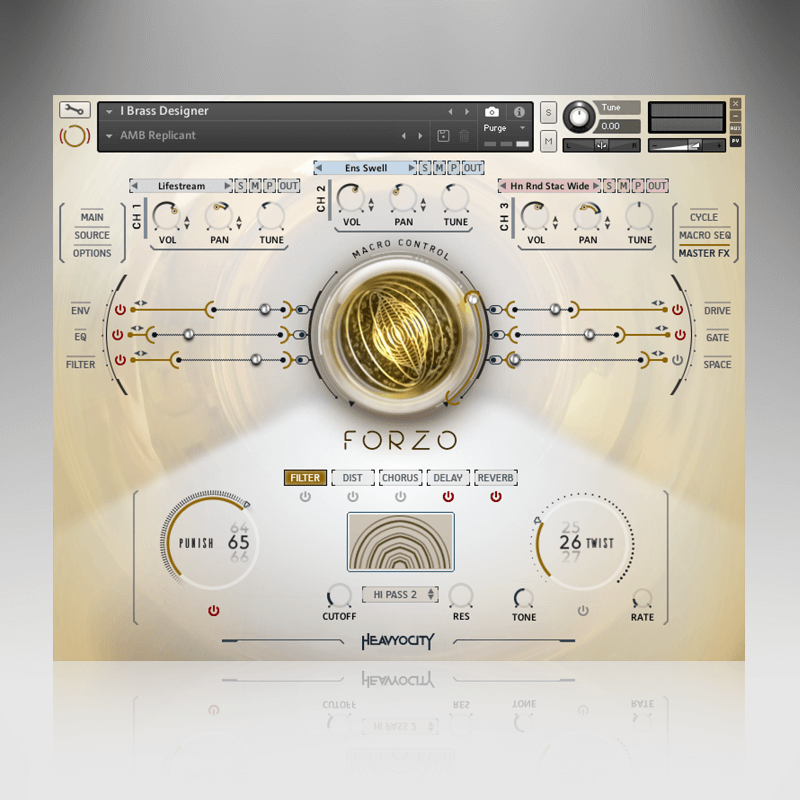 For this section, you have to change your brain-space a bit. Instead of approaching the library as a virtual orchestra, where you create the tonality you want by combining instruments with particular articulations, now you approach it as a library of source sounds to be manipulated.

Every articulation is listed here, with every mic position. You create a sound by layering 3 different sound sources, and applying Kontakt’s excellent selection of effects tools to go beyond the capabilities of the traditional instrument, while still retaining the timbre and tone of the sound source.

You can keymap each of the 3 layers, apply separate amounts of the Kontakt fx (envelope shaping, EQ, filter, drive, rhythmic gate, delay and reverb) Each of these effects can be connected to the large macro knob in the centre of the window. You can choose which if any of the layers can be affected by the knob. You can either use Midi control to move the macro knob, or use a built-in macro sequencer to move the knob.

On top of these layers is a master fx buss with filter, distortion, chorus, delay, and two signature effects from Heavyocity – punish and twist: both cool additional fx – a saturation and kind of tempo-synced bandpass filtering effect. Then there’s ‘Cycle’ which is a per-layer re-sampler that can sequence the playback of the sound source by splitting it into smaller sections.

This is great for creating stuttery glitchy sounds and is really inspiring. While still retaining the brass timbre, you can get into lovely synth pad territory, or arpeggiated rhythmic patches, while barely breaking a sweat.

There’s so much more but I can’t keep writing, that would be boring. Take a quick look at this:

The brass loop designer is equally inspiring to get your teeth stuck in to. Slightly different from the original designer – this is a collection of melodic and rhythmic looped content you’d expect to hear from modern soundtracks. There are 400 loops organised into banks, indicating what type of loop it is (ambient, low, melodic, rhythmic etc) These are all set to a key centre, which can be changed with some tuning keyswitches.

The presets for both designers are absolutely killer, and give a great idea of what the engines are capable of. The patch presets range widely from ambient pads with gentle fluttering movement, to raw brooding pulses. There’s so much nice evolution and modulation of the sound – it draws the creativity out.

In the same way, the presets of the loop designer are very well written motifs that can be expanded upon. I found it really interesting that almost all of the loops were in a minor mode. There were no major versions. I wonder if that’s just a reflection of how brass is mainly used in film soundtracks today.

I particularly liked the workflow of this library; clearly a lot of thought has been put into the design, and the thought has been put in by working composers, who know what they need fingertip access to. The keyswitches I liked – they’re a set position, but you can assign any articulation to any key switch – taking out the ones you don’t use much and replacing them is extremely useful.

On shorter note phrases, a ‘repeater’ section pops up. This is a really useful quick access panel to create multi tonguing effects, or really quick staccato effects by repeating notes to a set amount, and adjusting how those notes are played (cresc, dim, accent at beginning or end, etc) Being able to assign everything to One macro knob is also very useful.

This is the must-have library for the action thriller space war video game marvel DC fantasy extravaganza composer. And all of that ilk. The sound is in a definite niche – it’s not soft, or pastoral, and it’s aimed at the darker end of the brass atmospherics. But in creating those atmospheres, I think it’s unparalleled. The recorded sound of the brass instruments is absolutely phenomenal – perhaps the best I’ve heard. The dynamic modulation is easily the smoothest I’ve heard. I can’t hear any stepping between different velocity timbres as you sweep up the mod wheel.

The sheer power of the brass when you hit a large deep chord reflects just how well recorded, mixed and set up this library is. For dramatic, earth-shattering, tense powerful brass rhythms and blasts, beds and motifs, this is the peak of libraries right now. Go get it.

Forzo is currently on sale for an introductory price of $399, saving $150 for a short while. So grab it while you can! More info here.