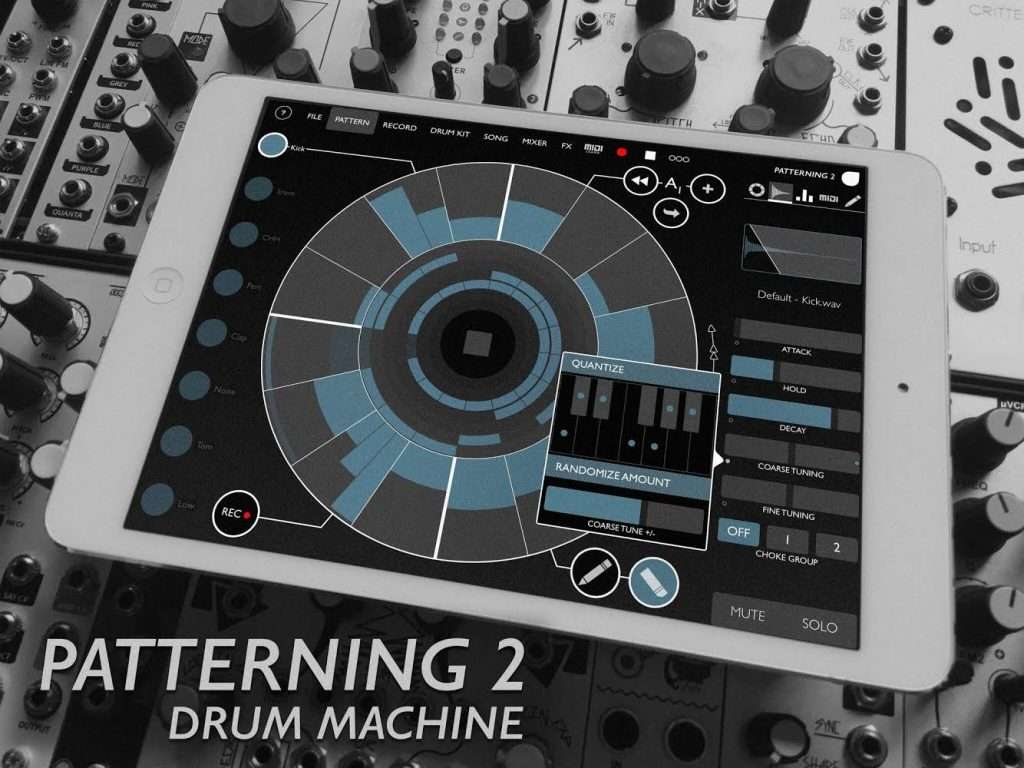 For Patterning 2, Olympia Noise Co. have built on the aspects of Patterning 1 that worked the best and added many new and wished for features. A substantial upgrade rather than an update.

-Easy to get lost in experimentation

-Easy to get lost in experimentation 😉

-Lacks the colorful touch of v.1

Patterning 1 was groundbreaking in iOS music production when it was released in 2015. It was runner-up for Apple’s overall App of the Year in 2015 (and a winner of our 2015 Sonic Joy awards – see also our Patterning 1 review). This was no easy feat for a music making app in the ocean or cesspool (take your pick) of the half million apps released that year. Patterning was a huge leap forward for music apps and on a wider scale in terms of drum machine interfaces in general.

Today Olympia Noise Co. released Patterning 2 (if you don’t see it on the store yet, you can pre-order it and you’ll get in the next few hours), the next generation of their circular drum machine.
It’s worth mentioning that Patterning 2 is a new app (intro price $14.99, 25% off), not a free update. More on this later in our review…

Not Re-inventing The Wheel

Developer Ben Kamen has made a sensible choice by not re-inventing the wheel and builds on what was great about Patterning 1.

The wheel, in this case, is the the circular pattern based sequencer. On a basic level, this is a set of wheels within wheels where each Loop on the wheel is a sequencer split in to any number of Steps (1 to 64). There is separate wheel for each of 8 different drum samples. Each step within the wheel has a volume style slider which controls velocity.

There is also a set of Layers in the edit page for each loop where each step for each sample can have different parameter setting for things like filter frequency, filter type, sample attack, pan, delay, reverb and tuning.

The tuning effectively opens up Patterning as more than a drum machine by allowing you to create bass lines or melodies by pitching samples in each loop sequence. Parameter automation is simple and sonically rewarding. Simply enable record and move your finger around on the filter or other parameter and your tweaks become part of the loop for that sample. 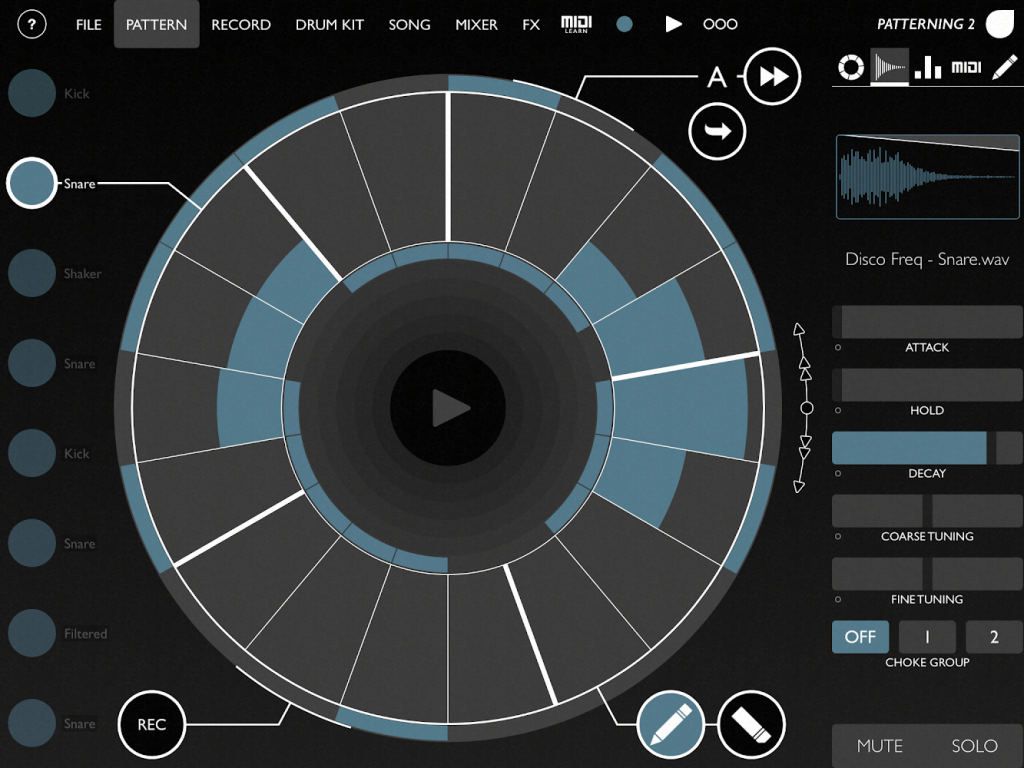 A key area that makes Patterning 2 great is the ability to have different numbers of steps per loop for each instrument and also nudge each loop clockwise or anti-clockwise so that complex rhythmic syncopations and poly rhythms become possible. Nudging a hi hat loop by a fraction can add a nice groove to proceedings. Swing settings and the Randomization layers further help to humanize your beats.

Another great addition to Patterning 2 is the ability to use multiple drum kits and multiple tempos within a song. There are even options to gradually adjust to a new tempo. The multiple drum kits can be used to totally change up the sounds in different song sections. I found the multiple kits useful for creating slight variations to a drum kit changing the tuning of melodic samples within a kit while leaving the drum samples within the kit unchanged. This allows for chord changes within your song.

You can hear an example of key change through the use of multiple kits in the AppJam video below.

Also, Patterning 2 adds an advanced ratcheting feature, with a helpful decay parameter to create growing or decaying velocities for ratchets.

The app uses the latest version of Ableton Link, with Start/Stop and now includes support for Link’s quantum setting.

It would be nice if the Apply To All button in the Loop Settings could be applied more narrowly to Apply to All 8 instruments but for a single parameter rather than all parameters (For example to just set the Swing to same percentage on all Loops). Maybe in a next update? 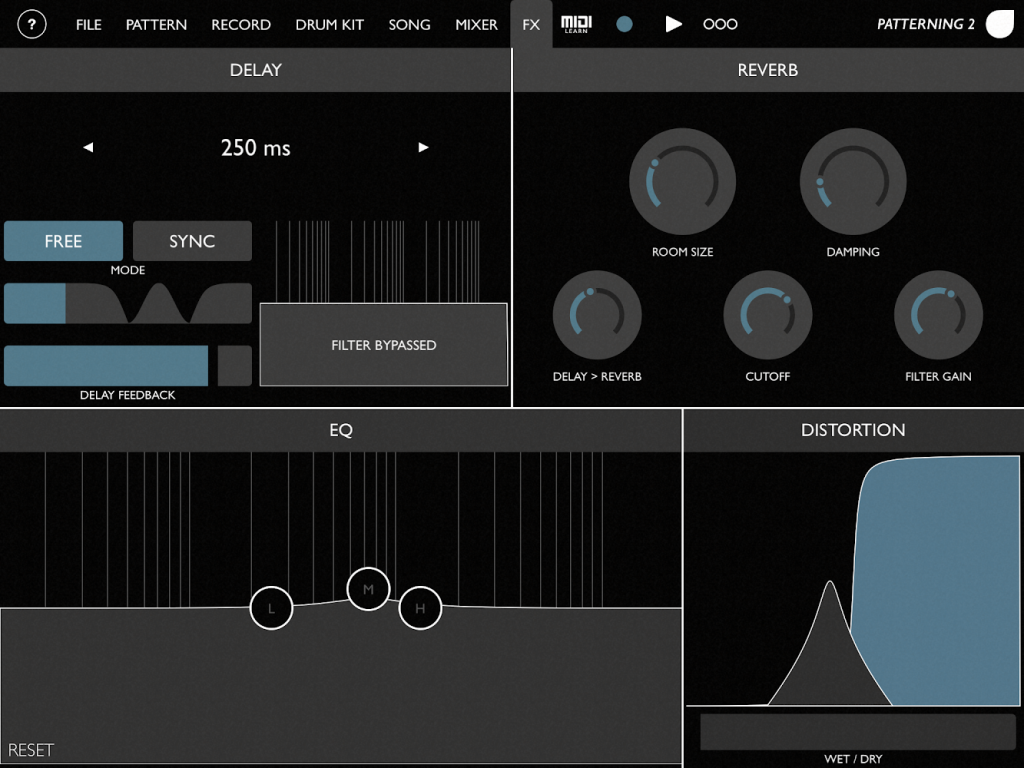 Patterning 2 is very nice looking but under the hood, the beauty is far more than cosmetic. Olympia Noise Co. have built on the aspects of Patterning 1 that worked the best and added many new and wished for features (check out their blog for more details). There will undoubtedly be those that will balk at paying for a new app and complain that it is not a free update. Patterning 2 however should be seen as a substantial upgrade in functionality rather than an update. Patterning 2 is a powerhouse engine for dynamic rhythmic experimentation. Keep those wheels turning.