An impressive third iteration to the series. Its machine learning technology is able to produce some effective comprehensive processing to vocals. 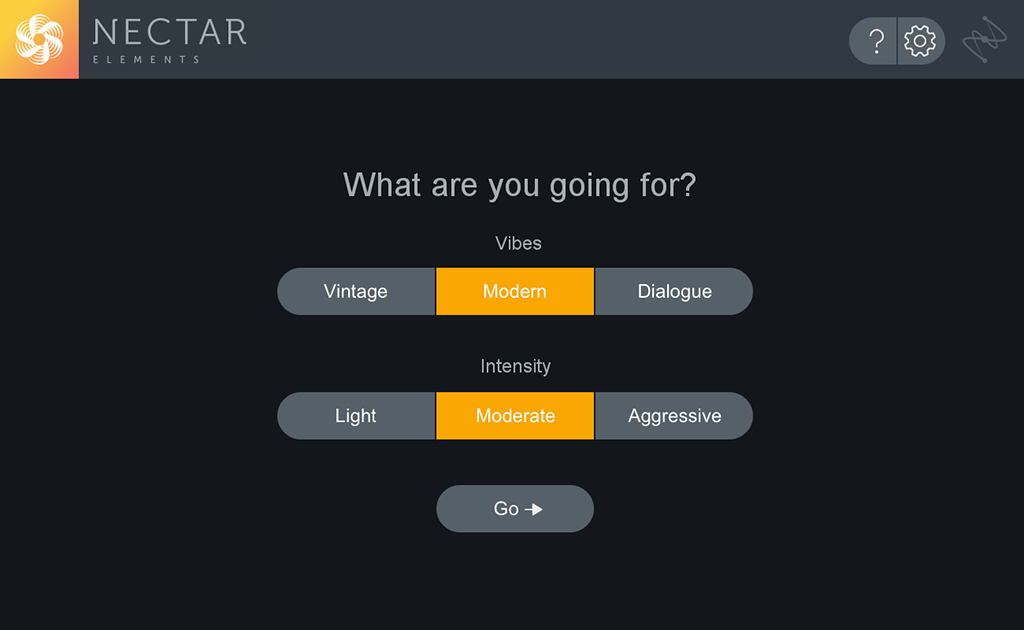 Nectar Elements’ Vocal Assistant asks for the style of vocal (Vintage, Modern, or Dialogue) and intensity of the processing (Light, Moderate, or Aggressive) before analyzing incoming audio.

After analysis is complete, there really any ways users can customize the controls aside from simply adjusting the intensity of the six parameters – so, to an extent, what you’re stuck with is what you’re stuck with. But, it’s easy to hit the start over button at the top and re-analyze choosing different settings to get a feel for which style might work best for your vocal. 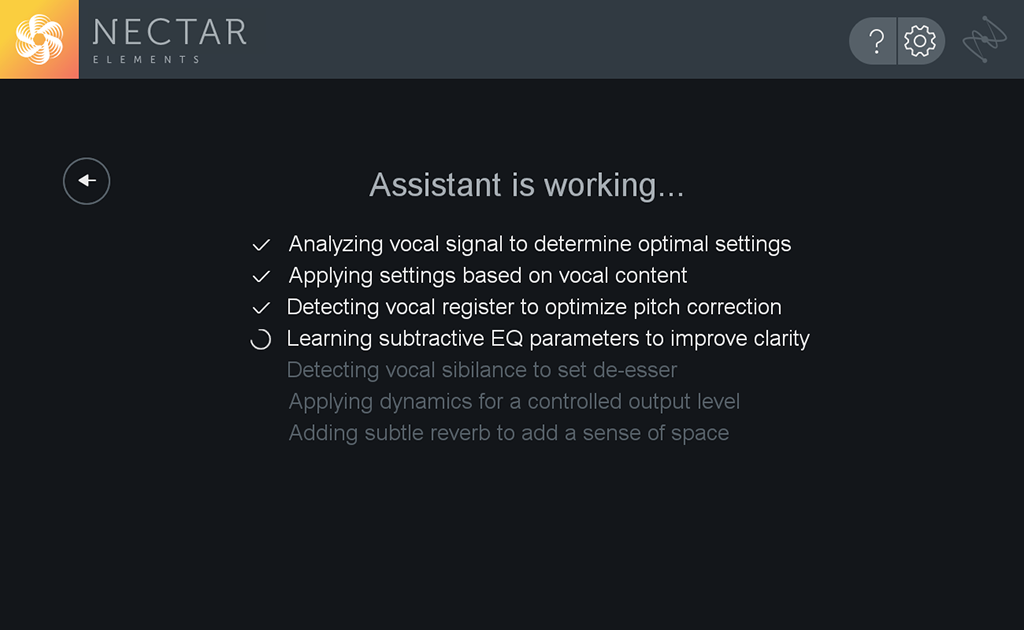 Now the important question: is iZotope’s new Vocal Assistant better than a real mix engineer? Can it hear what mix engineers cannot? Has machine learning already overtaken us? Will all jobs become automated? I’m here to unpack the extent to which each parameter’s function is convincing and effective, and which you should probably just turn off use your DAW’s plugin or a third party plugin to more finely control the sound. 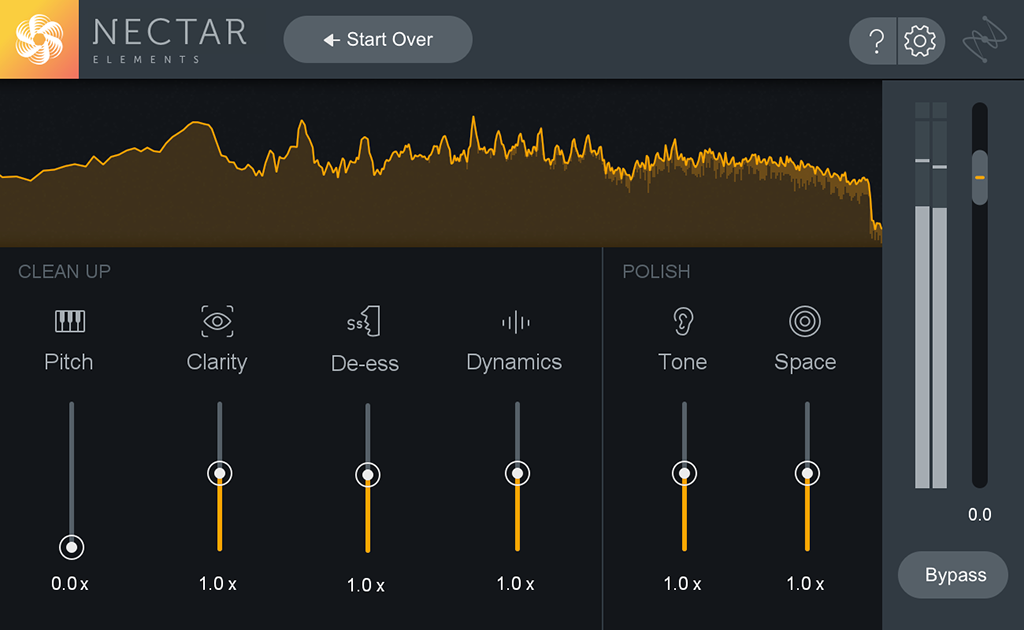 The pitch control is defaults to off, which I certainly appreciate in this over-tuned world. At 1.0x and 0.8x range it’s actually quite transparent and not too obvious. At 2.0x you can get some Kanye/T-Pain level pitch tuning effects. Again, there isn’t any under the hood settings with Elements as they were aiming to maximize speed and efficiency, so there aren’t any options for settings up a particular scale.

The clarity knob adjusts the gain on the subtractive EQ bands set by Vocal Assistant. The AI does a pretty good job of analyzing the incoming signal, and the subtractive EQ’s cuts tend to accentuate the good parts of the vocal and remove mud and non-vocal sonic information from the signal. Set on the maximum (2.0x) and with intensity of processing set on moderate or aggressive, vocals can certainly start to sound over-processed or too reduced. However, the higher intensity settings do come in handy when processing background vocals and other layers where you want some discerning frequencies but still need to leave a lot of space for other voices and elements. For dialogue and spoken word, Clarity cleaned up some of the mud in the mids, weird mic quirks, and some of the harshness in the highs. I generally liked and agreed with most if not all of the locations for surgical EQ cuts the clarity module would make.

The de-esser is really quite subtle, I was impressed. It preserves the upper frequencies that need preserving and discretely removes harsh material from the highs and sibilance frequency regions. The de-essers action sounded natural, and I was impressed at the precision that it could identify which frequencies would be too harsh.

The dynamics effect is basically a thick, gluey compressor. In the 1.0x range, it’s good at catching extraneous peaks and making sure the vocal doesn’t pop out at the listener too much. At the maximum 2.0x, it sounds very glued together, and would sound great for those genres and vocalists desire that highly-compressed vocal effect.

It’s also quite good at identifying the vocal in the mix and preserving the vocal compressing so much other non-vocal noise or elements, to an extent, it brings down the other elements whilst keeping the vocal front and center.

This parameter seems to respond a lot to the vintage versus modern setting you set prior to processing – under vintage under extreme settings it makes the vocalist sound like it’s coming from a transistor radio, and at mid 1.0x level settings it is being EQ’ed towards a classical 70’s funk record vocalist. Under modern, extreme settings bring out a pleasing slight distortion in the highs and cuts that preserve more of the low mids, and at 1.0x mid level settings it brings out the highs in a pleasing way, sounding like most modern tracks you hear on the radio today. However, with female vocals, using tone on modern mode could occasionally bring out some unappealing high frequency resonances.

The space module adds a reverb to the signal, under modern providing a verb while vintage produced a more slapback effect, although still reverby. In certain cases, on 2.0x, the most extreme settings, the vintage setting yielded some odd artificial sounding artifacts. Both were quite pleasing and natural to the ear and fit into the mixes I was working on at 0.9-1.0x. I can foresee seasoned mixers reaching for other go to reverbs if they have a different favorite reverb plugin the normally use for a bit more hands on control, but for beginners this one knob works surprisingly well in the majority of mixing situations by adding a convincing space and depth to the vocal.

Nectar Elements is an impressive third iteration to the series. Its machine learning technology is able to produce some effective comprehensive processing to vocals. While it would be nice to switch between vintage, modern, and dialogue modes without having to feed it audio again, the Vocal Assistant is worth the wait.
Elements is ideal for beginners and beginning producers that are also vocalists, or for seasoned mix engineers who want to take advantage of the precision of the machine learning’s surgical EQ. iZotope caliber effects and a convincing auto-tune that doesn’t add a bunch of artifacts, all of which sound natural, probably due to the machine learning intelligence that is built into Nectar.

Nectar Elements and an updated Elements Suite is available now and will be on sale from July 11-31, 2018.
If you enjoyed this review, you can support our work buying the product through our Buy Now button or clicking here.