Synth One has been a labor of love of Matthew Fecher, Marcus Hobbs, Aure Prochazka and the team at AudioKit that has evolved to fruition over several years. The idea was to develop a totally free pro level synth with even the code that underpins the synth being available free and Open Source. There is no hidden in app purchases or advertising just a genuine and altruistic desire to create a musical tool for all that have access to an iPad. After spanners thrown in the works by Apple’s iOS updates and hundreds of volunteer hours of developing, coding, interface design and sound design Synth One is finally unleashed.

AudioKit have put together a unique and powerful synth. The synthesis in Synth One is of the subtractive variety with two main oscillators (DCO 1&2). These both have a slider which morphs between triangular, square and saw shaped waveforms. Both oscillators have semitone pitch control and the DCO2 has a detune. This is great for slight tuning offsets between the Oscillators to thicken the sound. The low, mid and bandpass Filter options are decent quality and pretty smooth sounding. There is a mixer for the oscillators and also sub oscillator, noise, Frequency Modulation and envelopes for filter and amplitude to further shape the sound.

Synth One takes a novel and very intuitive approach to it’s user interface. Instead of pages of controls and sub menus the synth is laid out in 6 interchangeable panels that display two at a time in any combination on the upper and lower parts of the screen.

There is the logically named Main section which holds the oscillators and other main sound generating parts of the synth.

The Envelope section has amp and filter envelopes with the standard attack, decay, sustain and release curves and envelope amount for the filter.

The Pad section has a couple of XY controllers which are great for Performance control over the filters and LFO.

The FX section has a couple of LFO’s that can be routed to modulate up to 12 parameters each. There is also a lush sounding reverb as well as Delay, Phaser, Bit Crusher and Auto Panning.

The Tune section is a unique panel designed and coded by Marcus Hobbs with various tuning options outside the regular 12 note standard tunings with a colorful graphic representation of the frequency each note in the scale is tuned to.

Last but not least is the Arpeggiator section which can also switch to a simple but effective 16 step sequencer.

Here’s a video demo of Synth One:

Synth One comes with the settings you need to easily incorporate it into a larger setup. Midi options include built in Bluetooth Midi setup and Midi learn to allow you to control the parameters with an external physical Midi controller. There is also a handy on screen keyboard which is great for patches with glides enabled. The keyboard is small but usefully and can be expanded to fill the bottom half of the screen. There is also black or white option, octave range and key label options for the on screen keyboard.

The Pitch Bend control can be adjusted anywhere between -24 to +24 with separate ranges available for the Upper and Lower limits. The Mod wheel can be set to control filter cutoff or either of the two LFOs. 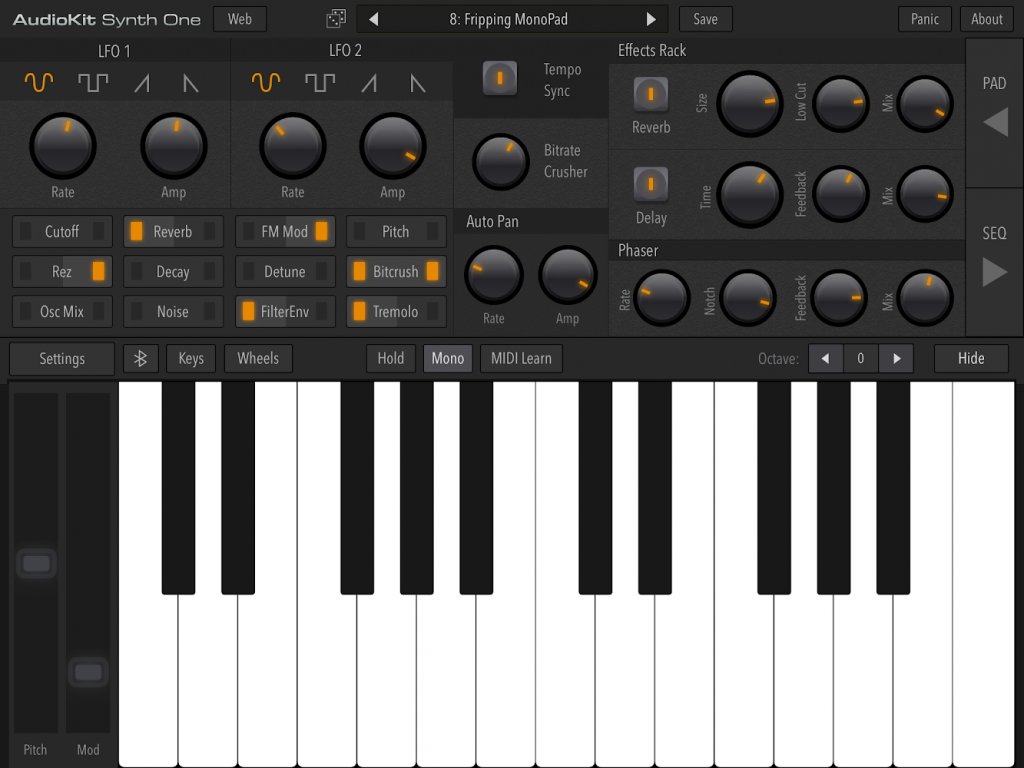 Here’s my AppJam video using sounds from Synth One

With Synth One AudioKit have created a fully featured professional sounding synth that can hold its own in a side by side comparison with many of the best paid synths on iOS.

The great thing about the Synth One project is that it is far from over. AudioKit have made the code Open Source so anyone with a bit of coding experience can experiment and adapt to develop a synth of their own or even contribute ideas and additional features to be considered for inclusion in Synth One itself. The future is bright.

Get Synth One for free on the App Store.