After the soaring success of their MSW1 single band mono maker and stereo expander, SoundSpot decided it was time to give this hugely popular plugin a new lease of life.

With that in mind, they started the development of the MSW2.

The new MSW2 is a complete overhaul in terms of code, interface & creativity, and can be used both subtly for better mixes, or pushed to the extreme to achieve a host of creative possibilities in the stereo field.

Below are the new features of this versatile, lightweight and creative update found in the MSW2: 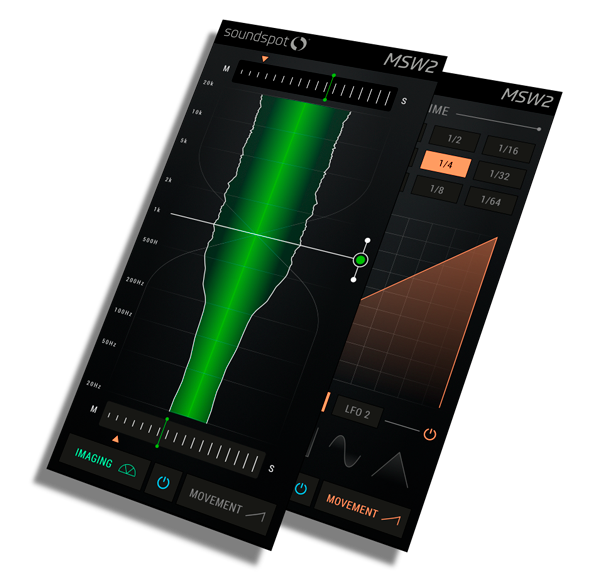 Because the fourier transform has much less resolution in the low end than in the high end, the graph gets more accurate as you move up along the frequency spectrum, just like other fourier based graphs like the spectrum analyzer of an EQ, or the spectrogram of a restoration plug-in.

Getting a visual representation of how the stereo information in your track is distributed over the frequency spectrum, allows you to identify any frequency ranges or mix elements that need their stereo image adjusted, and gives you more control over your mix as a whole.

Dual Band Stereo Enhancer & Mono Maker
The MSW2 has received a complete overhaul in the stereo enhancer and mono maker algorithm, and now includes 2 independent bands which allow you to alter the stereo information based on frequency crossover.

This allows you greater control of the stereo field, resulting in tighter mixes.

2 Band Variable Slope Crossover Network
The MSW2 features a variable slope control ranging from 12dB to 96dB per octave, that allows you to specify how quickly one band transitions into the other, and can be set by dragging the handles on the main frequency crossover with the crossover graphic changing to reflect you new setting.

As this feature uses a total of 32 filters, it is best to set and forget this parameter, as automation may result in a clicking effect. It was possible to smooth the clicks, however, the increase in CPU usage proved too great to warrant including smoothing the crossover network’s slope and frequency in the final product.

2 Band Creative LFO
Whilst developing the MSW2, it was found that great effects could be achieved by altering the stereo width over time. With this discovery, they decided that the plugin should feature a synced LFO control, allowing you to achieve these effects without the need to write automation lanes in your DAW.

The LFO itself has 2 bands, one for upper frequencies and one for lower. Once an LFO is activated, an orange arrow is enabled on the Imaging panel, which allows you to set the start position of the LFO.