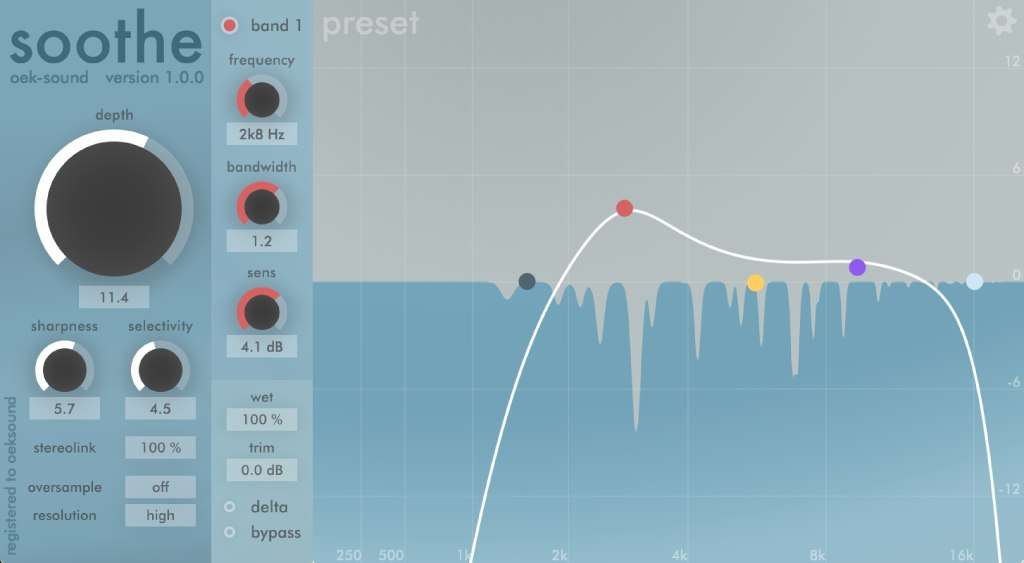 Soothe is a unique plugin that tackles a very specific problem found throughout the audio world, mainly reducing resonances that create harsh or muffled sounds.

Pros:
– It does what Oeksound claims it does without much fuss. Soothing!

Cons:
– The graphic display works counter to traditional EQs, latency is introduced into the signal, and it can mangle audio if you don’t take the time to learn how it works.

When I first started recording and mixing at home I was learning by making mistakes. I thought the most expensive mic was the best mic to use and that more mics were always better than less mics. I also purchased primarily cheap condenser mics that while very articulate also had the misfortune of being hyped in the higher frequencies which is compounded when you use the same mic again and again for overdubs. My mixes were harsh and boxy. I would have loved a plugin like Soothe.

Oeksound describes Soothe as “a spectral processor for suppressing resonances in the mid and high frequencies. It works by automatically detecting the resonances in the audio material and applying a reduction that matches the input signal.” My ears perked up when I read this line because unwanted resonances can be one of the greatest challenges to achieving a clear and balanced mix.

Soothe achieves this resonance suppression in a similar way to a multiband compressor or an adaptive eq but instead of attenuating or boosting an entire frequency region using only a handful of frequency bands Soothe can create dozens of narrow, specific cuts based on each of its five bands.

The layout has a fair amount of parameters but succeeds in a clear layout. The largest control, the depth knob controls the amplitude threshold of Soothe and because of this I find myself dialing it in the most. More depth equals more attenuation of resonances.

These three controls have a symbiotic relationship in a similar way to how compression parameters, threshold and ratio work together. When one parameter is changed I find myself reaching for the other and back to the first in a cyclical pattern slowly zeroing in on the desired effect.

At the bottom of the first section of controls are parameters for stereo link percentage, oversampling, and resolution which controls how fast the attenuation engages. 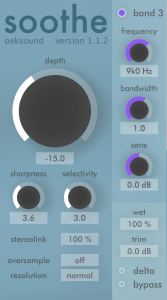 To the right of the primary controls are controls for each band as well as a graphic representation of the bands, the frequency spectrum, and the attenuation being applied to the signal. Below the band controls are parameters for wet/dry, trim, delta (which outputs the attenuated frequencies only,) and a bypass.

The wet parameter is great for dialing in an overly aggressive reduction and blending back in some of the original unprocessed signal.  Delta is useful to make sure you aren’t removing too much of the surrounding signal. 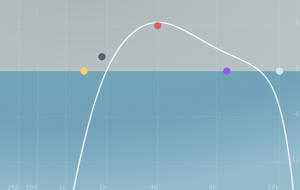 My biggest complaint about Soothe is how the bands are visually displayed in the spectrum analyzer. Disclaimer: I cannot think of a better solution to this issue so it might just be something we have to get used to like the attack knob on a 1176 compressor.

The individual bands when dragged up attenuate the signal. When I do the same thing on an EQ it boosts the signal. While this is similar to how multiband compressors like Fabfilter’s Pro-MB identify a range, I am not alone in thinking this is counterintuitive. Music producer, Mr. Bill just released a great walkthrough of the plugin with some useful applications and in his review mentions that it was counter to what he expected.

Who is Soothe for?

Soothe is advertised as a tool for vocals and I assume the reasoning is twofold. Mix engineers spend a large percentage of time (sometimes even a majority of budgeted time) working on the vocal take and because it is difficult and/or tedious to reduce the harshness of a vocal take without making it sound dull and lifeless. Wide bandwidth cuts (Q) can reduce the body, presence, or air of the recording while a bunch of narrow bandwidth cuts can take a long time and always run the risk of resulting in an overly sterile sound.

Soothe may have been designed to work specifically with vocal recordings but in the last couple of weeks I’ve found all sorts of mix problems that were “soothed” (*insert slide trombone sound) by this plugin. One useful application was to reduce the high hat that was dominating a live orchestral recording. With Soothe I was able to pinpoint the frequency range and reduce the intensity of the hats instead of compressing the range.

The result sounded far more natural and was easier to dial in than a multi-band compressor. Another useful application was cleaning up an electric guitar track that was recorded in a horrible sounding room. After processing with Soothe the guitar was punchier and felt closer to me as a listener on the sound stage.

I especially appreciated how fast it could be dialed in to reduce problematic frequencies in on-location recordings with tight budgets for mixing. It would also be helpful for those starting out recording and mixing to help pinpoint problems in the space they are working with and as a partial solution to dealing with problematic spaces. In fact, most of us don’t have access to Ocean Way or Abbey Road studios. Soothe is one more tool that is helping the bedroom producer close the gap between home recording and professional studio recording.

Soothe has found a place in my day to day audio toolkit. While I won’t use it on every mix, just like my audio restoration plugins it’s great to have for those problematic recordings or when the turnaround is tight and I don’t have time to cut out the million resonances of an untreated room recording.

For further info check out their site at Oeksound.com