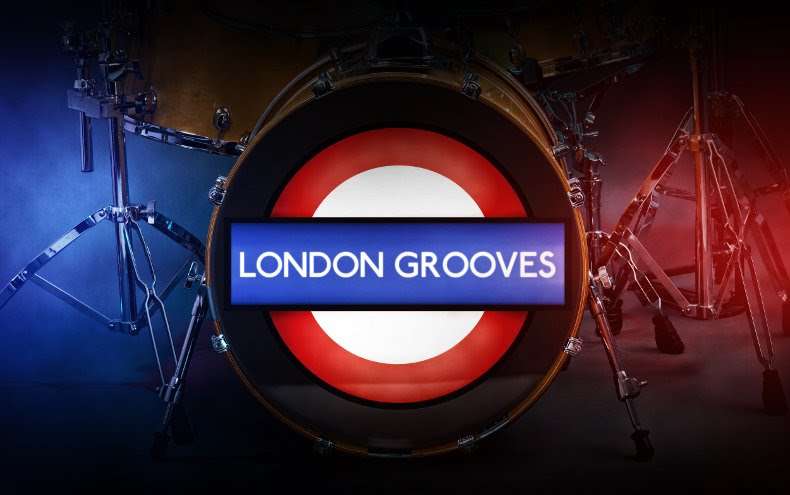 At IK Multimedia they have something new up their sleeves –  London Grooves, an instrument collection of acoustic drum kit grooves for IK’s ultimate sound and groove workstation, SampleTank 3.

Recorded by top drummers in London, this massive collection covers indie, rock and pop styles. With more than 1,500 high-quality WAV files, 1,200 ready-to-mix drum stems, and 300 stereo grooves, London Grooves is an ideal resource for producers and musicians who are looking to incorporate authentic drum sounds and carefully crafted grooves in their productions.

The collection includes finely recorded drum grooves with unsurpassed authenticity and character that will elevate the level of any production. Unlike simplistic (and generic-sounding) drum loop collections, London Grooves offers genuine performances where every beat and stroke embodies the unique playing abilities of these drummers.

Drums unlimited
Thanks to the flexibility and power of SampleTank’s engine, musicians can explore countless creative possibilities but with a unified approach to treating an instrument like an acoustic drum kit, which by nature is typically recorded using multiple microphones. In London Grooves, loops are treated like the parts of a real drum kit, with its multi-mic setup, and the resulting stems feature multiple audio loops of Kick, Snare, Toms and Room Mics that run simultaneously.

This collection also includes stereo mixdown versions of SampleTank 3 instruments. In addition, 44.1kHz/24-Bit WAV files are available, for immediate drag and drop into a session. 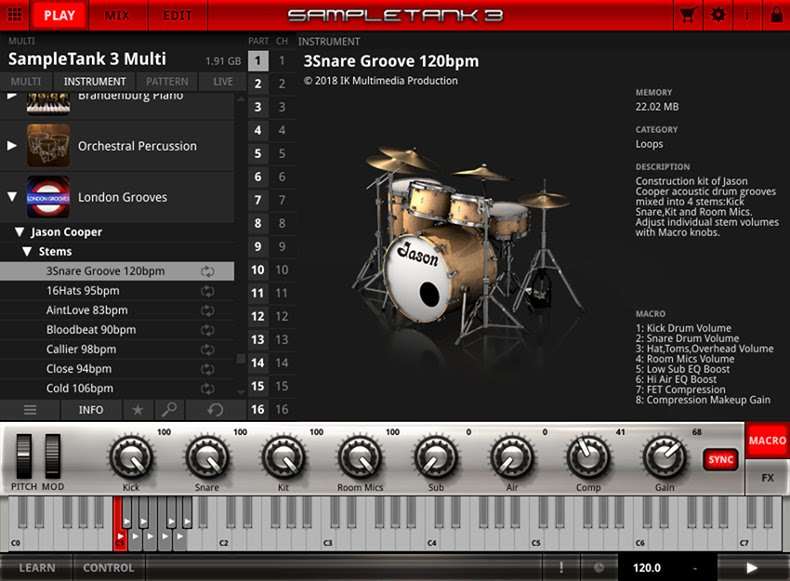 Fine-tuned recording in the heart of London
Jeremy Stacey’s recording sessions took place at The Pool, one of the most iconic facilities in London. Centred on an ultra-rare EMT console surrounded by some of the most coveted analog equipment, the studio’s selection also includes over 20 compressors, more than 40 different microphones, and 50 mic preamps. The main live room is large and spacious, with a “warehouse feel” that makes drums sound surprisingly well controlled. For the session, Jeremy used his Tama Star Maple drums in a 22″ 12″ 13″ and 16″ configuration, a Tama Starphonic snare, a Vintage Slingerland snare and his one-of-a-kind White Rogers snare and Istanbul Agop cymbals. Microphones included Neumann FET47s, an AKG D30 on the kick drum, Neumann U87s on toms and STC4038’s as overheads, fed into classic Neve 10 series pre/EQs.

Jason Cooper recorded in the live room of Narcissus Studios in Willesden, London. Starting with his Brady kit in Jarrahwood and Ludwig 14×6″ Black Beauty as the basis, the configuration included different kick drums and snare drum models and sizes from Noble and Cooley, Yamaha, and a selection of Zildjian cymbals to best suit the attitude of the recorded beats.

For the drum sound, a mix of vintage and modern microphones were used along with various Neve 1064 pre/EQ modules, with UA 610, Analogue Addicts or Sontronic Sonora II preamps called into action on occasion. To create pristine sounding loops that had some grit, drums were processed using vintage compressors like Gates and Urei’s as well as Sansamp units for a bit of distortion and attitude.

Veteran producer and mixer Cameron Craig brought his recording and producing expertise to the sessions, resulting in top-notch sounds with incredible authenticity and character that perfectly fit any production.

A two-time GRAMMY Award-winning producer/mixer/engineer, Craig’s impressive credits list includes Adele, Annie Lennox, Björk, Amy Winehouse and many more. His work encompasses an enormous spectrum of musical styles including indie, dance and orchestral recordings, and he’s been honoured with a GRAMMY award for “Album of the Year” for his part in recording Adele 25.

The power of SampleTank 3
The original SampleTank was the first-ever sample-based sound workstation for computer. SampleTank 3 builds on that heritage as the industry-standard sound workstation. It features more than 4,000 instruments in 21 instrument categories, including drums, bass, synths, piano, strings, brass, DJ loops, and much more. Also included are drum, percussion and full groove construction kit loops and MIDI files. This massive library of sounds, instruments, patterns, loops and grooves can be customized, enabling it to cover all styles of music such as jazz, rock, pop, funk, EDM, hip-hop, dubstep, house and beyond.

Pricing & availability:
London Grooves is available for download from the IK Multimedia online store for $/€79.99*.

For more information about London Grooves and the talent and gear behind its recordings, please visit the dedicated product page for London Grooves.