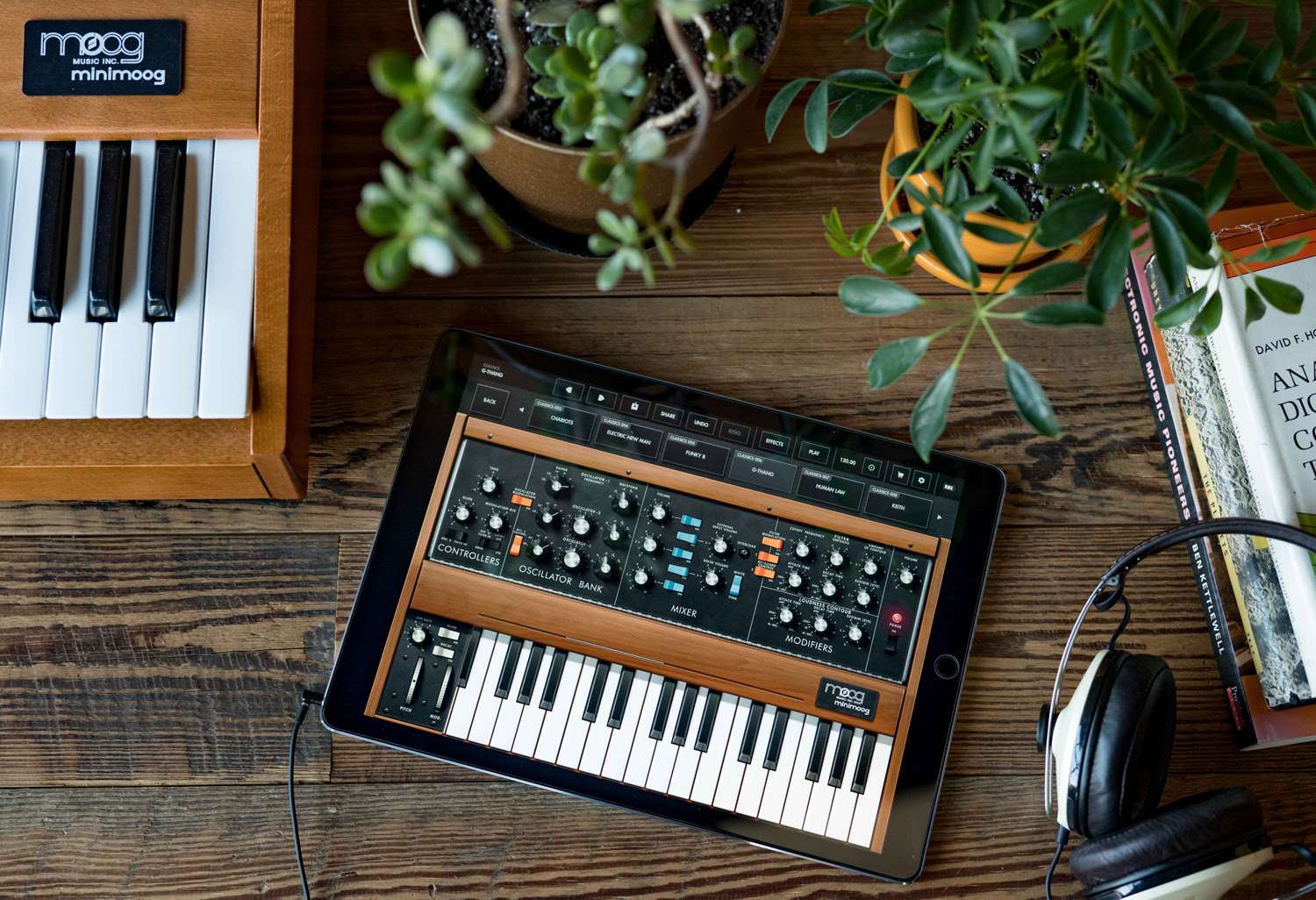 The iconic Minimoog Model D was released this week in the form of an iOS app, created by Moog Music. In this review I will discuss the features that set it apart as well as compare it to the other Model D emulations on iOS, Arturia’s iMini and Amazing Noises Mood.

Many in the comments sections of Youtube and various synth sites will be talking about how this app is a response to Behringer’s budget-friendly Model D. I don’t have anything to add to this discussion except to say that it is interesting timing (and a good thing for iOS musicians, given how affordable this app is!), and there seems to be a resurgence of interest in the circuit design, which gives us that legendary “fat” 3-oscillator-through-a-ladder-filter sound. From the manual: 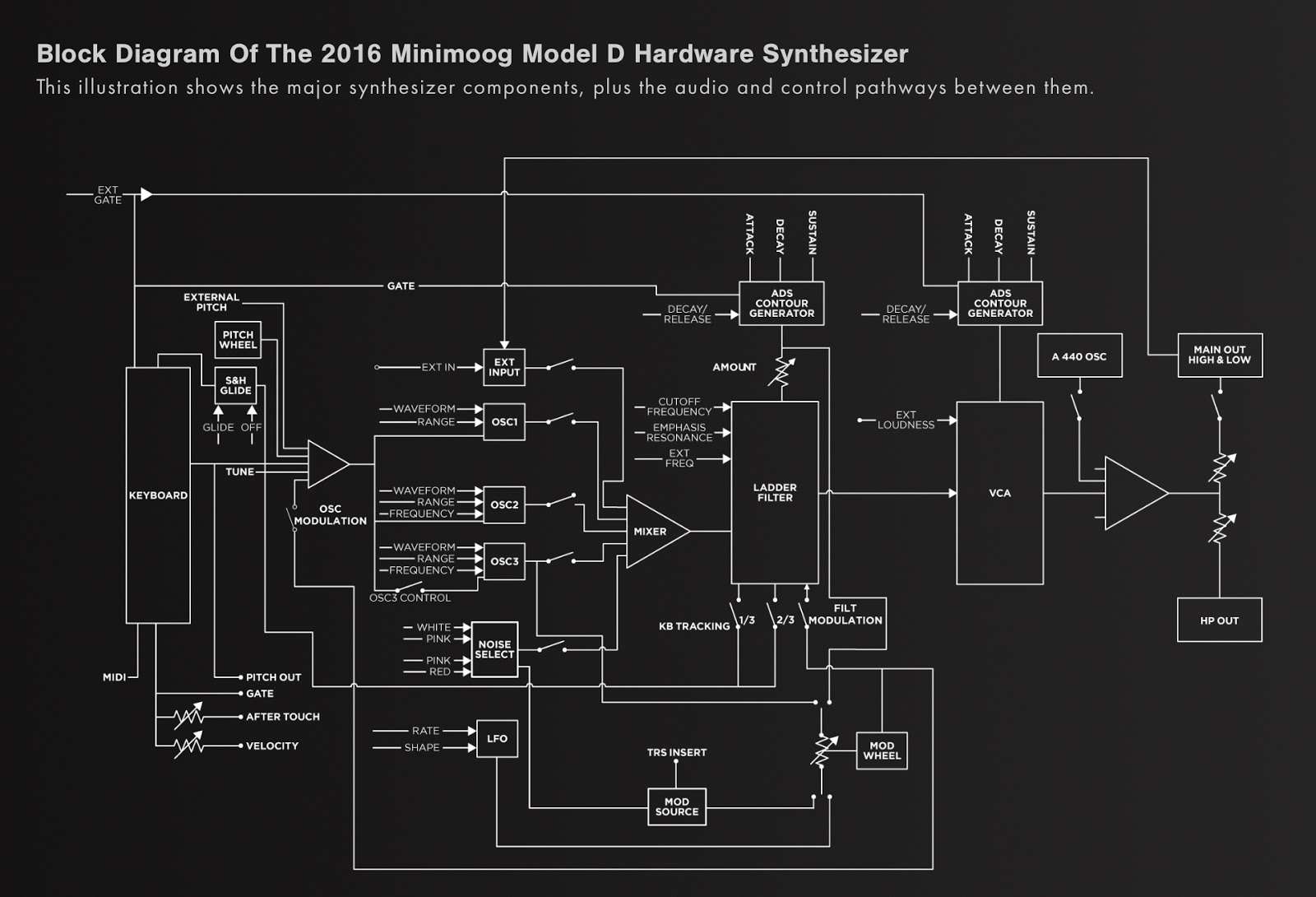 Like Moog’s other apps, really some of the best on the App Store (see also our Module 15 review), the sound quality of this app is of the finest quality, and the filter sounds better than other software version of this synth I have tried.

It has that visceral texture you get when you are working with actual analog circuits. The external input volume knob which overloads the filter, with a beautiful yellow-orange led glow to let you know the level of intensity, works really well and yields a truly natural sounding saturation. The extra punch of decibels arriving at the filter is one of the defining sound characteristics of the 1971 Minimoog Model D hardware synth. The fact that this app nails that makes it a really good emulation.

The “Play” feature is a nice addition which allows you to toggle into a zoomed-in view of the controls you are more likely to use while performing. This feature, focusing on ease of use and performance, points to what made the original hardware so famous, that it was made specifically for performing musicians.

The polyphony can be mono or up to 4 voices, one more voice than the Arturia’s iMini, although the desktop version Arturia’s Mini V has up to 32 voices. As a keyboard player, I love to be able to hear how these sounds, usually used for bass or leads, sound as harmonies, and they sound superbly rich.

One of the nice things about switching to 4 voices in settings, is that there is an automatic drop in volume when you switch to avoid clipping. Moog is teasing us with this, making us want polyphony in their hardware machines.

There is an arp, bender, delay and loop for effects. The clever interface for these lets you toggle them to drop down over the main controls, and they look kind of like small Moogerfoogers, “microfoogers” if you will.

The arp and delay are both solid effects and give you another way to tie in to the clock. The bender is a truly beautiful and unique effect, and the looper is incredibly fast and fun to use.

Be careful with the dBs while using the looper though – as you stack sounds you will quickly start to clip! Once you are finished with a loop, quickly use the share button to send the audio to other apps using the “Open in” function.

The Bender adds detailed pitch drift and shimmering magic. The description from the manual is useful: “The Bender is a highly-flexible, two-stage stereo time modulation effect inspired by classic Moog designs. It is comprised of two primary functions; the first is a short stereo delay, and the second is a modulation LFO used to add motion to the sound. . . this design will unlock a wealth of effects including chorus, slapback delay, flange, rotary effects, and more.”

Make sure to MIDI map to the Time knob on the Bender effect, it is very subtle and interplays well with the Feedback knob, yielding beautiful metallic tones.

The MIDI-mapping feature is the same as in the Moog Model 15 app where you go into mapping mode and can easily map by pressing a key or turning on a knob on your controller. This really takes the chore out of MIDI. Additionally, if you make an extensive CC Map you can save it as a preset as well as share it with the “Open in” function.

Arturia’s iMini was the go-to emulator for Moog Model D on ios, but this new release from Moog takes the Arturia down a notch, because everything about it is just a little bit better. There are a few things it has though that the Moog does not.

The iMini has a pair of Kaossilator-style XY effects pads that are a set up to control a customized modulation matrix. The XY effects controllers are still one of the most reliable ways to take advantage of the touchscreen.

Also, if you move to the fuller featured, 32 voice polyphony version on desktop, Arturia Mini V, you get other interesting features like a very deep mod matrix, a motion sequencer and a soft clipping switch on the output.

The Amazing Noises Mood app stands out too, since it is very creative. It is inspired by the classic Moog Model D, not trying to be an emulator, but extends the sonic possibilities of in all sorts of ways.

It has 16 voice (real-time monitored) polyphony. In the mixer section not only do you have the 3 oscillators and noise, but you also have FM and a sample source called “Level Warp,” creating the possibility for a variety of added frequency content. Overall, it’s a more aggressive or modern sound, with a ring mod, distortion, and reverb as effects.

Don’t forget there is a feature-rich LFO with every knob in the app, one of the hallmarks of Amazing Noises, offering deep modulation possibilities.

Returning to the Moog Model D app, here is a sound sample using one of my favorite presets called Harmonibell. This preset makes use of the Bender which provides those higher frequencies, and recorded with the Looper.

In closing, the Moog Model D app is a faithful emulation, with superb sound quality and highly usable set of effects, though light on modulation options (and it’s a steal at $4.99 right now!).

My main critique is of CPU usage. On Ipad Air 2 it takes up a sizeable chunk of CPU within AUM whether loaded as an AUv3 or IAA. Maybe the more recent iPads do better, to warrant claiming that you can load multiple instances, however I’ll need to close all apps and load only one instance while I’m using this.

Also the looper, as fast and useful as it is, could use more of a tape style saturation as you add layers, to help smooth out clipping. Finally, I find myself want wishing for something else in the app to experiment with like some kind of matrix or something like that, but it is actually quite straightforward. Good thing it sounds so good, because this means I might actually have to make music with it.

Pro tip: to INIT the synth patch, hold down the save button next to “SHARE.”