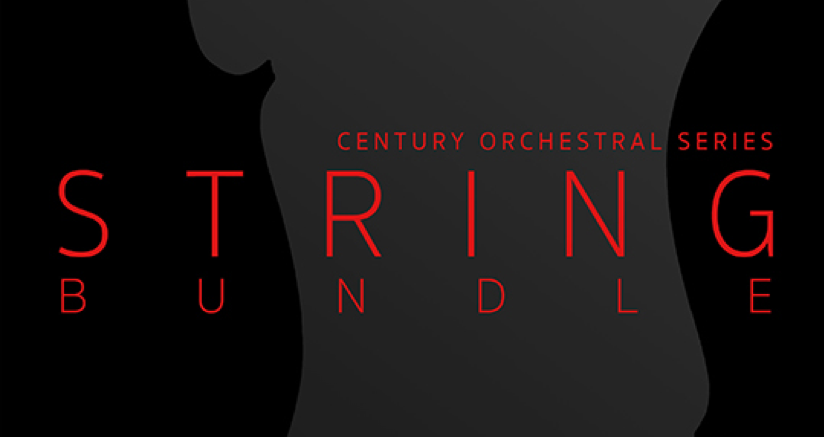 8Dio has introduced a string library that sounds new, huge, and expressive. The focus is on getting good sounds fast, not on endless parameter choices.

In 2011 8Dio, a new software instrument company came out swinging with 40 different sample-based instruments. Many of these instruments were a new take on previous releases by other companies but when I first heard their examples I remember that all of them sounded fantastic.

I was blown away by the level of realism I heard in their solo violin and vocal instruments. Since then they’ve continued to meet or exceed those initial offerings in depth of expressiveness and overall sound. In December they released Century Strings Ensemble and again I’m impressed by this new take on the string orchestra.

Century Strings bundle is comprised of two instruments, Century Ensemble and Sordino Strings. Century Ensemble includes the standard articulation types such as spiccato, pizzicato, legato, trills, tremolo, and harmonics but where this instrument really shines are the several short and long arc articulations. To me, this is instant Downton Abbey! A string sound that is lush, massively expressive, and in your face.

When I first opened up Century Ensemble I lost an hour of my life by just improvising with the violin and cello instruments. Total fun! However, there are plenty of other sounds if you aren’t on that Neo-Romantic vibe. Using sus non vib, col legno, and harmonic trem I was able to quickly create a more angular, Elliott Carter kind of jam.

Sordino Strings is made up of muted recordings of many of the same articulations found in Century Ensemble. If you are new to strings this might seem like a lot of extra work and hard drive space for a muted version of the same instrument but as someone who has played in an orchestra I can say without a doubt that muted strings have a certain pent-up urgency about them that can really add dimension to an orchestral sound palette.

8Dio seem to be obsessed with playability, ease of use, and sound above all else. When I first loaded an instrument I found the user interface to be incredibly clear. Historically this has not been the case with such nuanced instruments by other companies. At the top of the user interface you will find the instrument browser.

This is comprised of ten user assignable slots to instantly recall articulations. A quick double click on any of the slots will open a context menu with a variety of articulations to choose from. Once an articulation is chosen the user can define the midi note or control change number to switch to the articulation by simply clicking on the keyboard icon and dragging over the control note.

Directly below the browser is row of knobs that control dynamics, expression, speed, release tails, vibrato, and legato volume. Not all of these knobs will be useable depending on the articulation that is engaged. 8Dio achieves this by deactivating the knobs not used, greying them out.

I prefer this approach to the counter which would remove knobs entirely from the interface when not in use. This way the parameters aren’t shifting around on the interface depending on the articulation which is distracting when in the middle of making music. All of these parameters are mapped to specific control change values and can also be reassigned quickly to a user’s own midi controller.

The microphone mixer and three-band equalizer is at the bottom of the interface. Here the user can blend close and room mics to taste, pan them to different positions, and route through different outputs.

Choosing Mixed microphone fader results in a full polished sound and was my go to when just having fun playing the instrument. Decca exhibits a sound similar to traditional orchestral recordings with a very focused sound while still capturing some room tone. Wide adds a pair of mics that split the distance between the Decca tree in the center of the room and the edge of the stage. These microphones add a very large stereo spread that gives the impression that the orchestra is wrapped around the listener.

Next are the Spot faders. I found these faders to sound overly similar with only subtle differences. Looking in the manual I couldn’t find a description of the individual spots but in an email response 8Dio explained that they were close micing the first and second chair players of the individual string sections. This explains the similarity between the faders.

I had hoped the different Spot faders would include a microphone position that was even closer to the player to hear more of the string noises and transients that are more evident in solo instrument recordings but I understand why that isn’t really in the purview of an ensemble bundle. I can always get those transients in one of 8Dio’s solo instruments. 8Dio’s choice in spots makes sense when understanding the final goal: a big punchy string section.

I asked 8Dio about how the Mixed fader achieved this by balancing the different microphones. They responded explaining that spots were mixed a db above the Decca and outriggers which explains that very upfront and contemporary film sound.

I’m not one to spend much time with built-in effects for instruments like this. Usually they are overly generic and a bit underwhelming. However, I found the choices made by 8DIO in this selection useful in some contexts.

One such example was to distort and blend the string sound into something that sounded more like an angry synth patch. Both Degrader and Transform added something interesting to the more traditional string palette everyone is so familiar with. I’ll definitely try more of these effects in the future!

Using a sample instrument is mostly about the sound and playability but there are other considerations we need to address when choosing our tools. What’s it like to understand and learn how to use the tool? What are the interactions with the company like? Installation, customer service, and documentation play an important role in how we use a tool.

Let’s look at installation first. The instructions from the first 8Dio email directed me to install a download utility and copy/paste my serials to begin downloading the instruments. This process was super easy and the download utility was rock solid. I’ve had problems with other download utilities in the past and I was understandably apprehensive as the download takes up a whopping of 204.9 GB! But all that worrying was wasted as it downloaded on the first try. Granted it took almost a full 24 hours with my slow internet speeds.

Next was to dig into the manual. As I fall deeper and deeper into the black hole of music gear I tend to have even more specific questions about interaction with the gear. I’ll give the user manual a quick glance, jump into the program, and then go back to the manual as soon as I hit a roadblock in using the gear.

I opened up the manual that came with the download but was disappointed to see that it was really only a walk-through that briefly described the parameters of the user interface. This is becoming more of a trend with newer companies and I understand why they do it. The user interface is so much more intuitive than some of the more complicated software instruments of the past so in reality there were only a couple of questions I had that weren’t answered by the manual. Next, I went to the website to investigate.

While I didn’t find the answer to my questions I did find some other really useful resources. The first was a series of Youtube videos walking through different features and the interface as a whole. The second was a whole series of support articles ranging from basic topics such as installation and updates to useful tips for Kontakt and user libraries in general.

After checking out those articles I still had some questions so I fired off an email to support. I used their built-in email widget to ask a couple of questions but didn’t hear anything back. After waiting a week I sent them an email and got a quick response with helpful and friendly answers to all my questions. I’m going to chalk up the original radio silence to a glitch in that initial email sent because of how fast they responded to a direct email.

8Dio vs. The Rest

Century Strings Bundle wasn’t my first sample instrument for the string orchestra and if history is any indicator it won’t be the last in my toolbox. What it has become though is an integral part of my string sound that I couldn’t do without now that I have it.

I’ve used (and continue to use) offerings by East West, Spitfire, and Native Instruments and the great thing about all of them is that they all sound a little different from each other. When I mix several of them the nuances of the different samples add a new layer of depth to my scores.

I found the sounds in Century Strings Bundle to be clear, big, bold, and full range. What I mean by full range is that even the upper strings (violins) have a weight to them that is not found in some of my other samples. I would describe this weight as adding to 8Dio’s modern sound. While the other set I compared CSB to was missing this weight and clarity what it did have was a certain richness to the sound created by a larger cluster of upper overtones that made them less clear (and really useful to combine with CSB.)

I’d also like to add that if I was starting out again without any orchestral samples this would be an incredibly strong contender for a first purchase. The sounds in CSB are great and do hold their own against any of the other big names in the field!