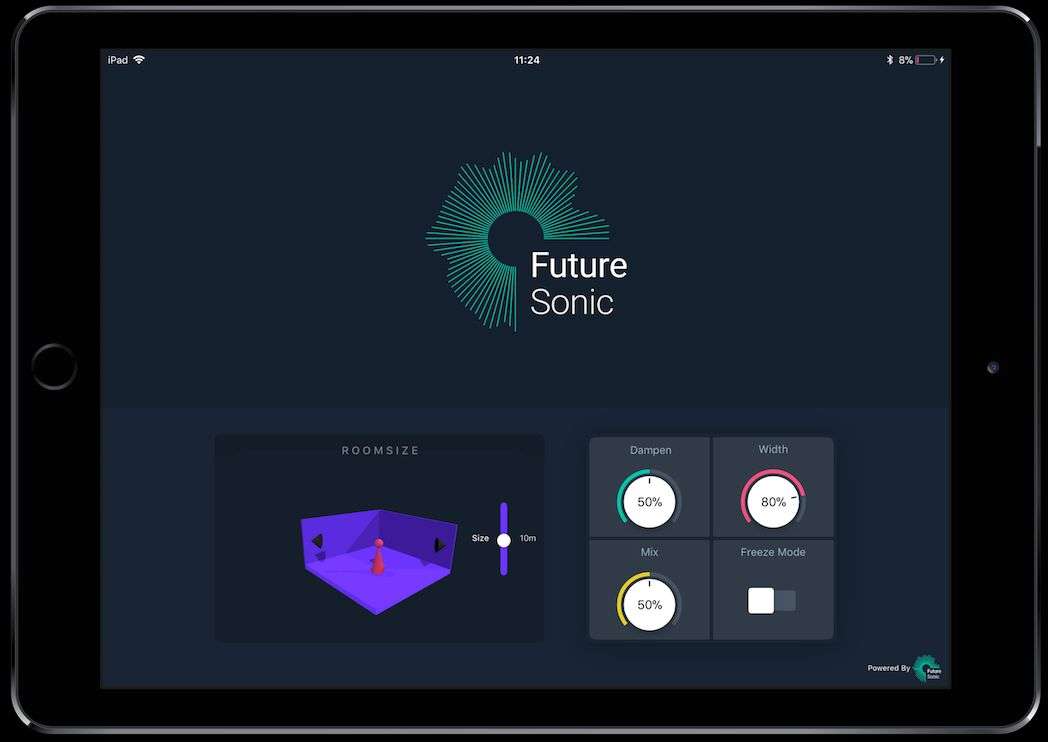 The new FreezeVerb app from FutureSonic is an inexpensive dedicated reverb effect for iOS Audio Units and standalone, with a spotlight on the “Freeze” function. The controls are room size, stereo width, damping, mix, and freeze. And the reverb sounds nice and lush by itself with a visual display of the room size built into the UI.

Among the basic set of controls, the freeze function is what makes this reverb stand out. Although a bit simple, the freeze could be compared sonically to the sound capture of the Electro Harmonix Freeze pedal or the infinite switch on their Cathedral Stereo Reverb.

Listen to my demonstration of Freezeverb to get a sense of a musical application.

In this track, I have a field recording sample of a Steinway B acoustic grand piano playing in the Samplr app, and a melody on top of that played in real time by the Korg SV-1 Fender Rhodes. Both instruments are bussed through AUM into FreezeVerb, where I have MIDI setup so that I can control the mix knob and the freeze function on FreezeVerb with my Arturia Keystep mod strip.

There is a satisfying metaphor behind the concept of frozen reverb: a flowing stream of audio, like water, can be immobilized by a sudden drop in temperature, this flick of the freeze switch. If reverb is sound decaying in space over time, this is time suspended where the decay becomes, suddenly, an infinite drone.

I think Freezeverb is fairly well executed, especially for the price which is $3.99 USD and £3.99. My review will now focus on an inspection of the sound quality. After all, reverb is most beautiful when it is naturally occuring, so sound quality should be an important consideration in a reverb unit. In the digital domain, reverb tends to be a CPU hog, so it is worth considering whether the sound design compromises for that on iOS devices or else to fit the price point of $3.99.

Here you can see Freezeverb in action:

A few criticisms and possible solutions

During my test, I’ve experienced a bit of attack noise on the capture when “Freeze” is switched, and the app itself lowers the gain of the incoming audio a bit. Also, there is white noise on the frozen signal, sometimes the noise hiss is unpredictably loud.

That said, I’m confident the developer will address these issues soon. They could be solved with the introduction of a few new controls, such as:

A mix knob or envelope on frozen signal that is separate from the normal reverb in order to capture the incoming audio without hearing the attack noise of the freeze.

A gain input and gain output for this app, similar to what we find in reverb apps like GliderVerb and Reverb – FDN by Amazing Noises. This is necessary because when you introduce this app into the signal path in AUM, you can hear it reduces the gain of the incoming signal and also changes the EQ profile. As long as we are thinking about gain and eq controls, there might as well also be morphable resonant filters!

Controllable or at least quieter white noise sound characteristic would be appreciated. There is a pronounced white noise present in the signal when the freeze function is engaged, sometimes rendering the effect a bit unusable. Also, at times there is a bit of a “tick” sound when the effect is engaged. Not knowing how much of that noise will be present when you flick the Freeze switch makes the effect unpredictable. 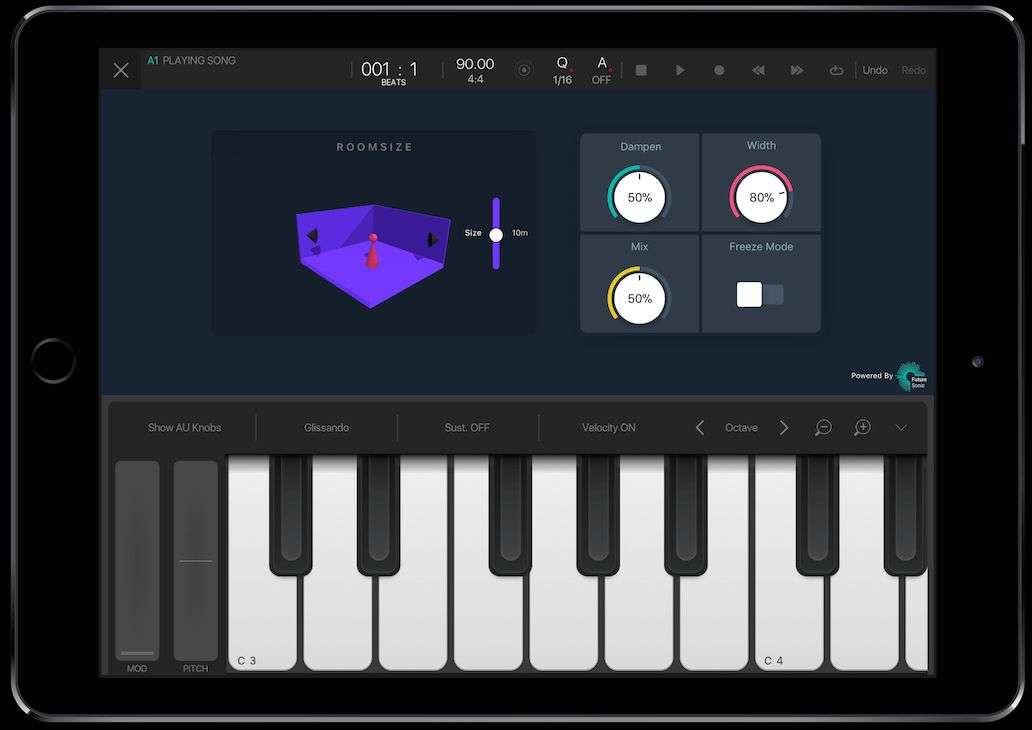 In conclusion, caveats aside, besides being musically inspiring and useful (and a bargain at $3.99!), Freezeverb presents some interesting possibilities in terms of expanded functionality. The freeze function could grow and become an entire drone synth engine!

Particularly, I would like to hear this freeze effect in the context of a convolution reverb, where the frozen signal could be characterized by the sound profile of the impulse response sample! Perhaps this could be implemented in a future version of this software or inspire another developer.

You can learn more about Freezeverb on the Futuresonic website.