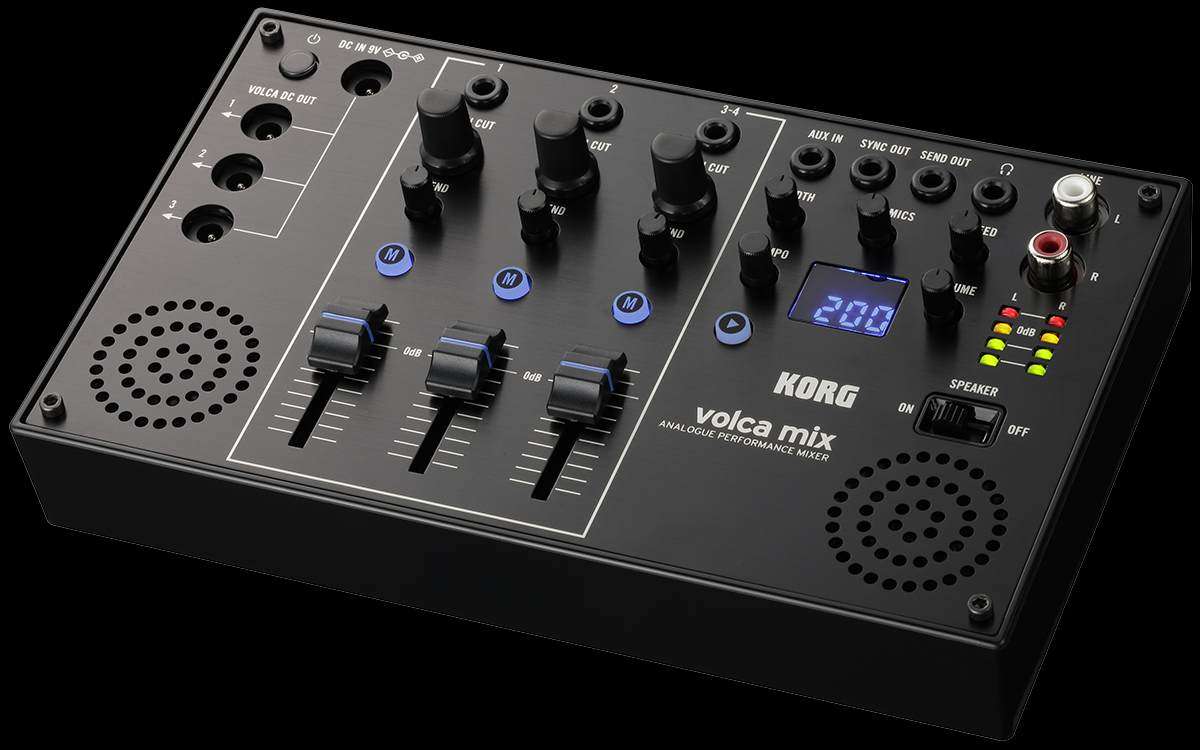 Korg took a few years to get this out on the market, but the Volca Mix is here at last. It’s certainly not the first mixer device suitable to Volca units (see the little Bastl Dude or the more full-featured Vixen Mixer from KVgear), but it’s the first official Korg-branded one and it boasts some unique features.

The Volca Mix is essentially a four-channel analog mixer, with two mono inputs and one stereo input (all with mini-jacks), for connecting up to 3 Volcas. You’ll find the usual gain, mute and lo/hi filter you would expect.
As for the outputs, Korg opted for RCA stereo line outputs (not our favorite choice) and a Volca-like headphone out.

The Volca Mix also provides power for the 3 Volca units connected, so you won’t have to deal with daisy chain cables (we mentioned some in our in-depth Volca FM coverage).

What really makes the Volca Mix stand out, compared to other ‘similar’ products is the inclusion of two speakers, a ‘Volca-tailored’ master effects section and a sync/clock feature.

There are two little speakers, supposedly louder than the Volca’s built-in speaker (we wouldn’t expect much though, all the tiny speakers we’ve experienced – from the OP-1 to the Korg Volca and Yamaha Reface units – are generally pretty harsh and poor-sounding).

is the inclusion of a master effects section with analog circuitry. It features an expander (basically a mono to stereo image converter) and a compressor with sidechain.

If you have external effects (like Korg’s own Kaoss Pad series, including the Mini KP2s we featured some time ago) or line-level stompboxes, you can easily throw them in the mix using the send and AUX in jack. Each channel has its own send level knob.

The Volca Mix also boasts an analog sync out jack (like the one you already have on your Volcas) and a play button and tempo knob to control your machines. Ready for a Volca-only performance?

If you have a few Volca units and still haven’t got any portable mixer, then by all means yes. It’s compact, loaded with convenient features and affordable. If you have more than three, the Vixen Mixer is a better (albeit a bit more expensive) option. If you’re broke, the Bastl Dude is the way to go. Last but not least, if you only an ultra-portable passive mixer (no knobs/faders, etc.), have a look at the RK-003 by Retrokits.