Syntronik is a sample based synth/rompler now available for iPad/iPhone. IK Multimedia have sampled the oscillator waveforms from 37 synths including classics from Moog, Oberheim, Roland, Yamaha and Sequential Circuits. These have been combined into 17 instruments available individually or collectively as in-app purchases.

The app is free to download and comes with 25 presets with at least one from each of the 17 instruments. The full version comes with 1200 instrument presets that can be searched by instrument, style, timbre, genre and mood. There are also 200 Multis which are layered patches of up to 4 instruments. For connectivity, Syntronik has midi input and is compatible with Inter-App Audio, Audiobus and also shows up as an Audio Unit (AUv3) inside compatible host apps.

Not Just Another ROMpler

Initially, when I heard about Syntronik my thought was this is just another Rompler. I expected the included sounds would probably be nice but that calling it a synthesizer might be a stretch of the word in terms of the sound tweaking possibilities.

Once diving in I was pleasantly surprised by what Syntronik is capable of. The basic synth architecture is based on the sampled oscillator waveforms from classic synths and modeled filters from the same synths. There are 2 oscillators per instrument and 7 filter types with cutoff, resonance, velocity and drive. Each instrument also has AHSDR envelopes for Filter and Amplitude. There is an LFO with 5 waveform options and tempo sync to control pitch, filter and pan. 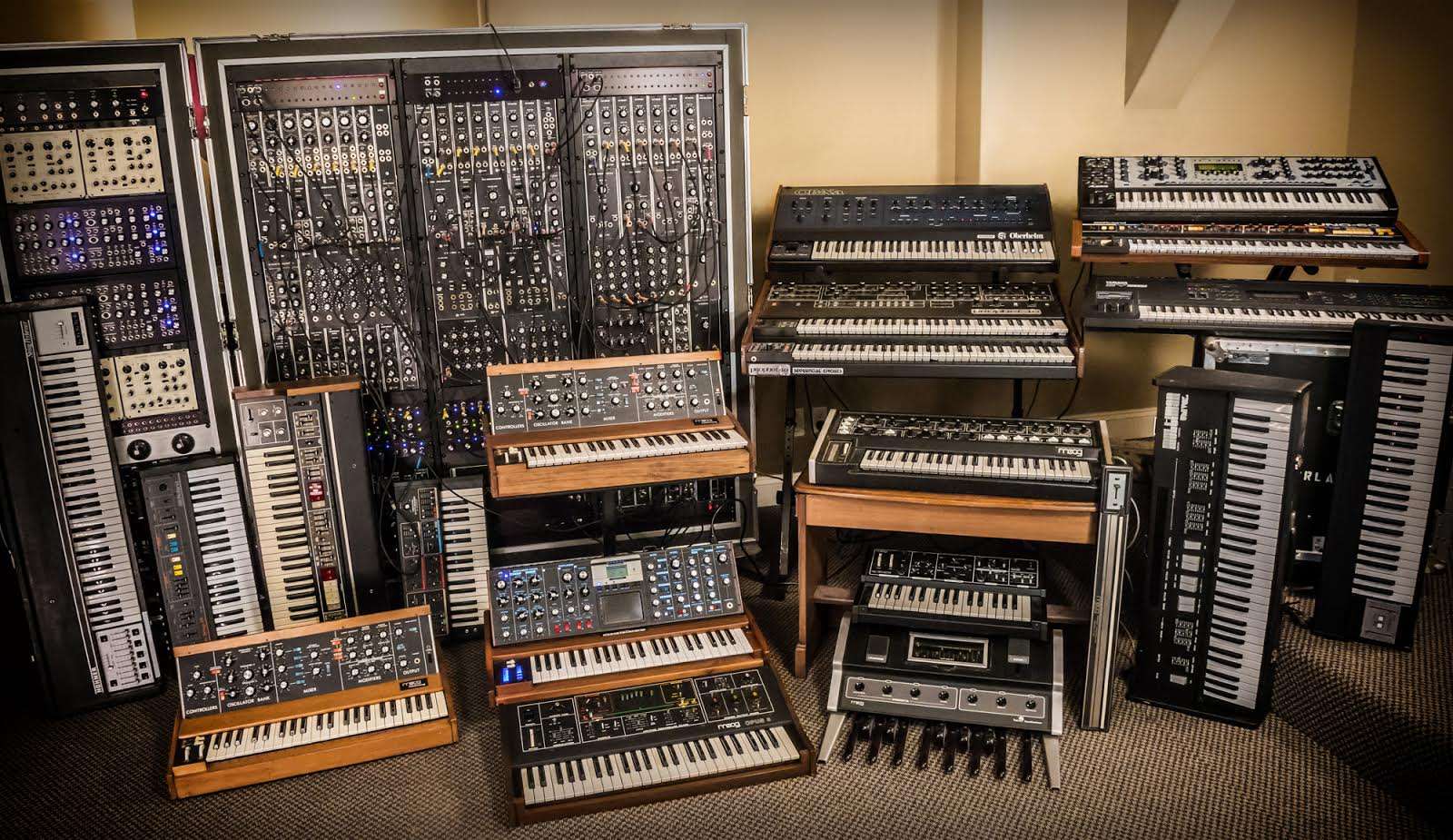 Syntronik’s modulation and routing options are limited compared to some synths but the number of effects included really make up for this. There are 37 effects including 12 Modulation effects, compressors, EQ, distortions, amp simulators, delays and reverb.

The quality of the effects is high with elements directly ripped from other IK products such as T-RackS and AmpliTube. Up to 5 effects can be chained per instrument. The ability to layer 4 instruments with 5 effects each into a Multi means that there are fairly unlimited options for rich sound design. 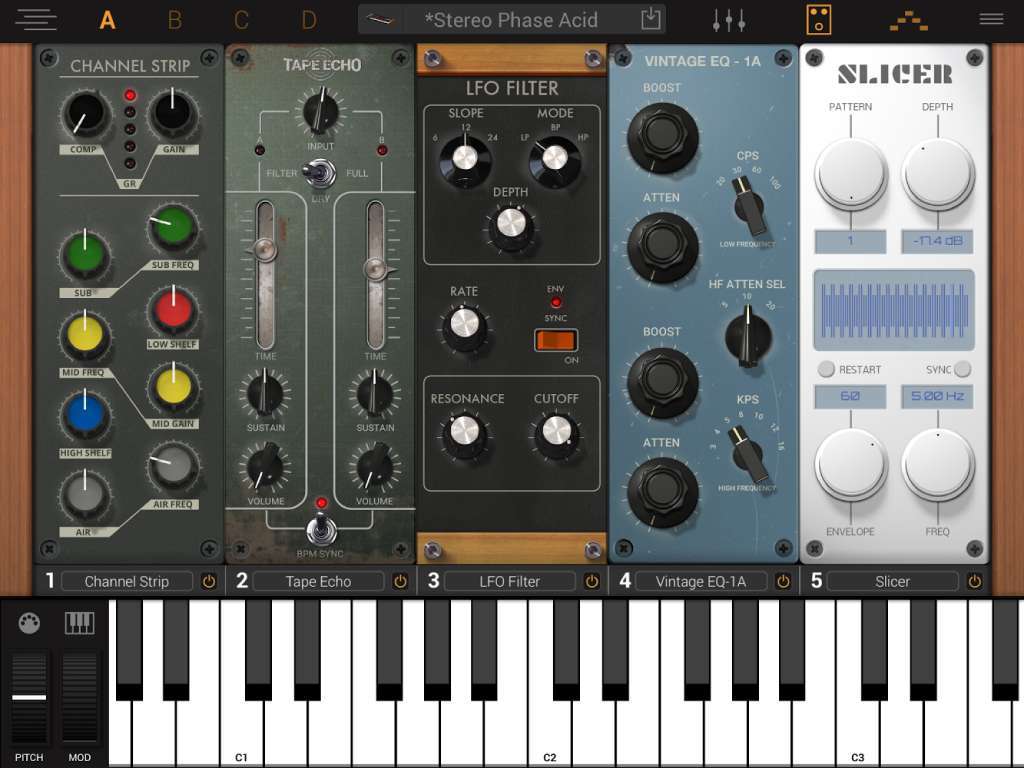 The Arpeggiator in Syntronik is very well designed and is fully featured for an iOS app. You can have different settings for each instrument layer which provides plenty of options for complex sounds and polyrhythms. The Arpeggiator page allows you to specify the number of steps in the pattern, adjust note velocities, note length, pattern rate, swing, add ties and even have individual steps trigger as a chord.

This is a nice feature as it allows you to generate some complex patterns where some steps trigger a full chord whilst other steps trigger single notes. Another useful feature is the ability to save user generated arpeggio patterns for later use with other sounds. 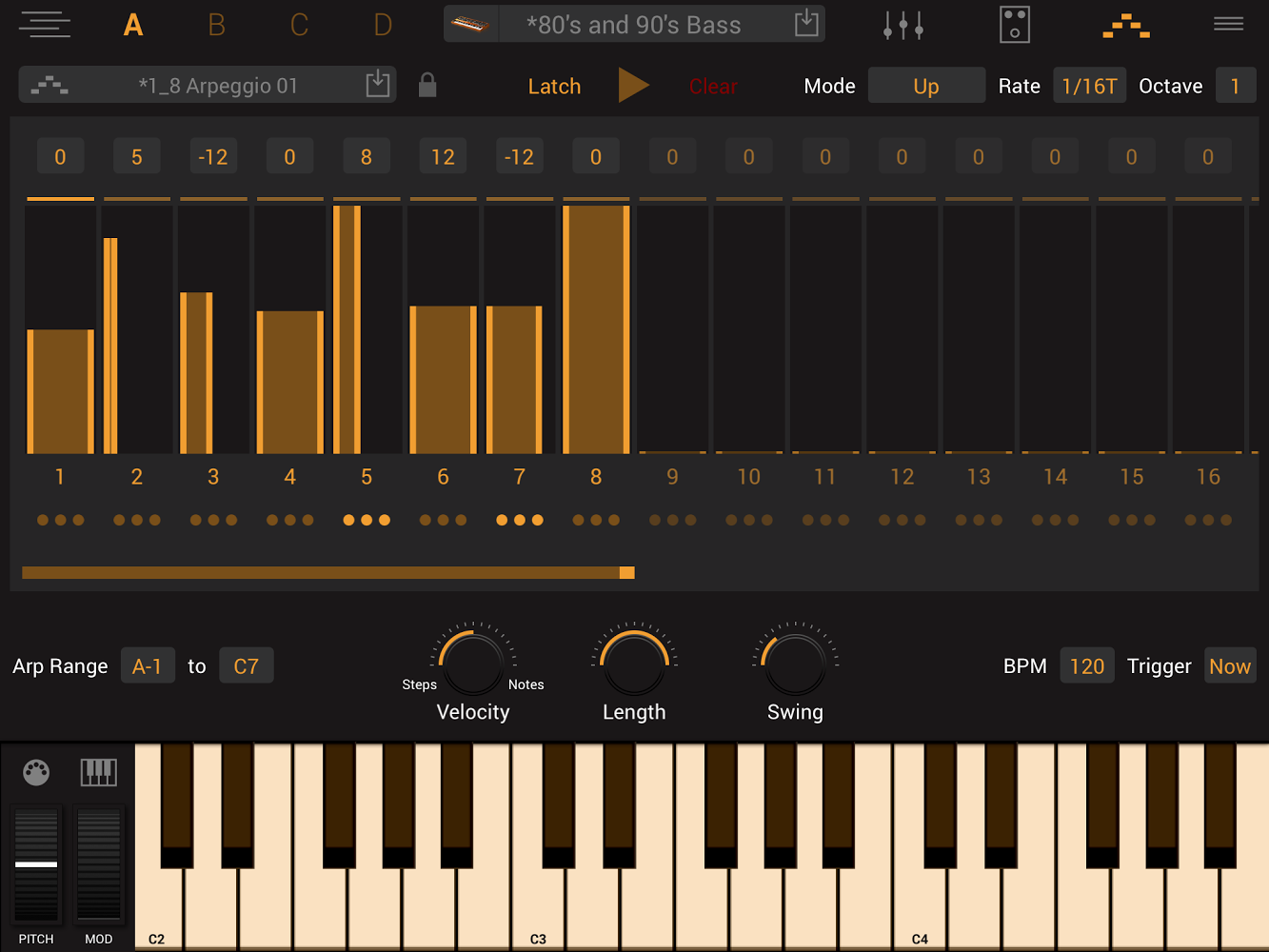 In terms of iOS apps, Syntronik is at the higher-end for cost. The full app costs $79.99 or there is the option to choose which of the 17 instruments to unlock at $9.99 each. This may seem like a lot for an iOS synth especially when there are other powerful synth options on iOS like Layr, Mood, Zeeon and Moog Model15 available for a fraction of the price.

If you are specifically looking for a Mini Moog or Oberheim SEM emulation you are probably better off going with Mood/iMini or iSem rather than the individual In App instruments within Syntronik. However when you compare it to the PC/Mac version of Syntronik which is currently $299.99 the value seems far better. The PC/Mac version is a 50gb download.

IK have managed to squeeze that down significantly for iOS. Presumably, there is some compression of the samples involved in doing this but to my ears I could not hear a difference in the sound quality when comparing sound examples from each version. The best value individual in-app purchases, in my opinion, are the ProV (Based on Sequential Circuits Prophet synths), Noir (MultiMoog/MicroMoog/Prodigy), Harpy 260 (ARP 2600) and J8/J60 (Roland Juno 60/Jupiter 8). 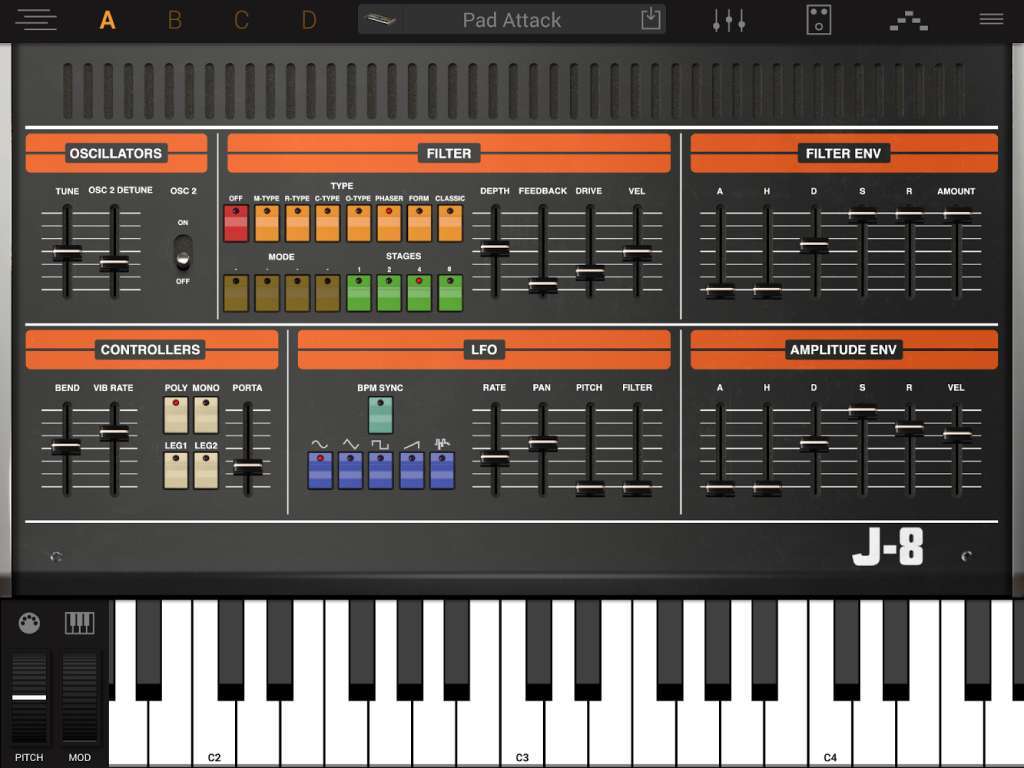 In conclusion, Syntronik is a rich and vibrant sounding collection of synths. It contains a lot of classic synth sounds and has the distinct advantage that the sound of the analog synths is truly analog due to the use of samples. The ability to layer four instruments with their own individual effects and arpeggios makes this much more than a Rompler preset machine. The freedom, for example, to take an Oberheim oscillator, run it through a Moog style filter then through an arpeggiator, FM modulator, amp simulator and a slicer effect makes for an expansive and flexible synth.
For more info, please visit the IK Multimedia website.