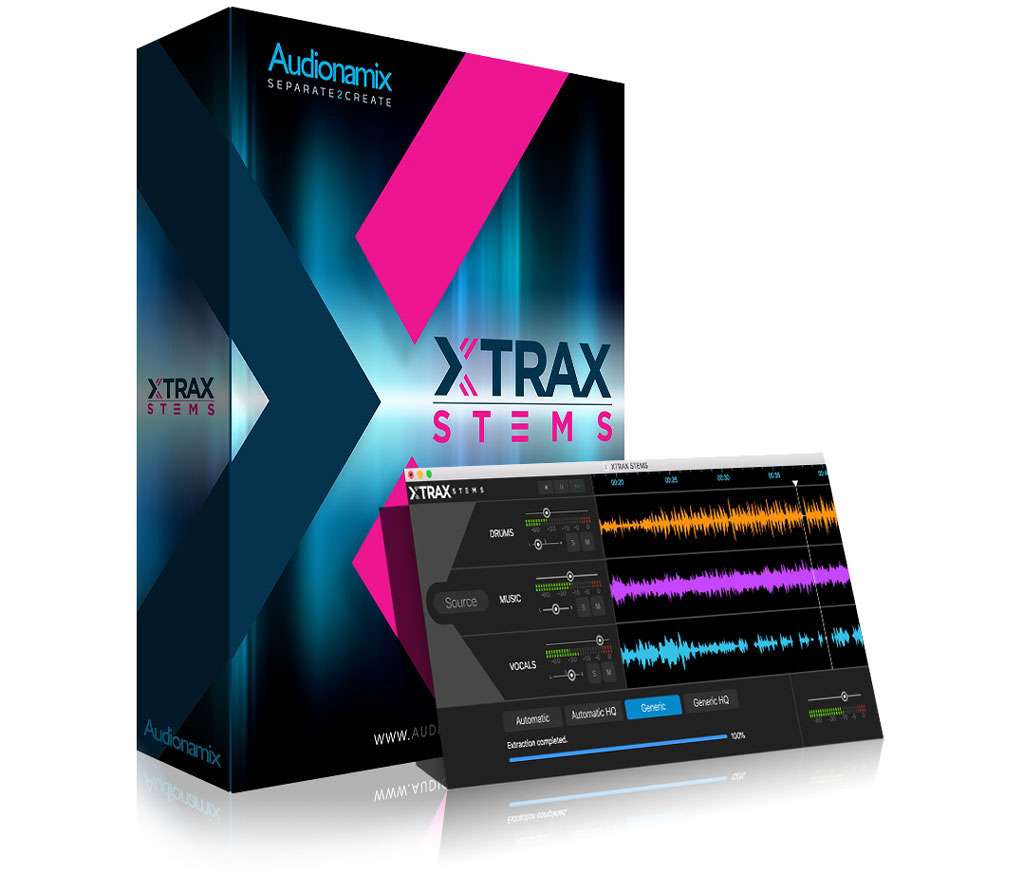 XTRAX STEMS by Audionamix is a song stem creator. It can extract a vocal track, music track, and drum track from an already-finished song. This is the first of its kind, allowing remixers, DJs, and producers alike to separate a song into its component parts.

DJs can be infinitely more creative with their mixes using this tool, they can layer separate track elements and elements from different tracks together, opening up previously impossible creative potentials for live sets.

For producers, XTRAX STEMS allows producers that only have access to the full song and not the acapella to create objectively ‘cleaner’ remixes and bootlegs of originals, as the algorithms used by XTRAX STEMS are far superior to what is possible with just an equalizer at isolating vocals. Users can essentially create their own ‘karaoke’ tracks to sing or play along to.

In XTRAX STEMS, users can listen and compare different algorithms and choose which they prefer. Panning, volume, mute, and solo controls are available for each extracted stem. XTRAX STEMS does require an internet connection for the extraction, as it uploads songs you import to the cloud for processing.

XTRAX STEMS has four algorithms users can choose from: Automatic, Automatic HQ, Generic, and Generic HQ.
I generally found ‘Generic HQ’ to be the best option for the majority of the tracks you will hear in the audio demo. Each algorithm is different, and works differently to identify what content is a vocal and what is musical.

Automatic acts to separate vocals only when they are detected, whereas the Generic mode separates out melodic content from the song throughout its entire duration. While the ‘HQ’ algorithms take longer to process, they can improve the audio quality, depending on the audio content.

Does It Actually Work?

During our test here at ANR, we fed EXTRAX STEMS with different kinds of content. Overall, XTRAX STEMS does an impressive job at filtering out vocal content with limited artifacts. Certain songs seem to be easier for it to parse out than others, so it really is highly contingent on the audio material.

The drum tracks are normally pretty clean (it does a great job in getting the smack of the drum transients), but on denser more complex songs you can hear occasional but brief chord glitches/harmonics, whereas on more minimalist tracks, with fewer instruments and more space, XTRAX can render out a relatively dirt-free drum track. The music track will often have reverb tails from the drums and occasionally the sub from the kick drum if it has a particularly long tail. The music track can sometimes sound quite glitchy – it could often make for some creative material/sampling for remixes.

Here’s a demo track I used during the review:

In certain cases, you can hear “whispers” or high frequency from the vocals in the music track. If you’re a producer trying to get a clean acapella for a bootleg/remix, it would be very easy to layer the extracted vocals with the extracted music stem with a highpass filter (probably around 5-10kHz) to add back some of the content that was “incorrectly interpreted” by XTRAX STEMS. Note that only a few of the songs I tried had significant high-frequency vocal content in the music channel.

XTRAX STEMS is an unprecedented advance in audio separation – I am not aware of any other software that comes anywhere close to this level of vocal isolation with artifacts this minimal. Essentially, it’s a must-have for any DJ interested in getting even more creative with their live sets, or producers looking to create cleaner and less muddy bootlegs and remixes.

The only drawbacks are that it requires an internet connection (even on a very fast one, it can take several minutes to get a track analyzed), and that certain extracted vocal stems can exhibit more artifacts than others (dependent on the nature of the song and how the song was mixed, usually), as there is no guarantee that every song you try will give you 100% clean vocals. The price ($99/£88 approx) is reasonable though, and XTRAX STEMS may pay itself back in no time once you use it on a handful of songs.

XTRAX STEMS is available for $99 from the Audionamix website and from selected retail partners, such as Plugin Boutique. If you enjoyed this review, please consider buying XTRAX STEMS using the buttons above. Your purchase will help us paying our server bills and other mainteinance costs.

Software Specifications
XTRAX STEMS is a stand-alone application for Mac only. Because the separation processing is done in the cloud, a high-speed Internet connection is required to use it.
Supported Operating Systems:  Mac OS X 10.11, 10.12 and 10.13
XTRAX STEMS works natively with .wav files with sample rates up to 96kHz and bit depths up to 32-bit. Other supported audio files (.aif, .aiff, .aac, .mp3, .m4a) are converted to .wav upon import. Stems are exported as 16-bit, 44.1kHz .wav files.