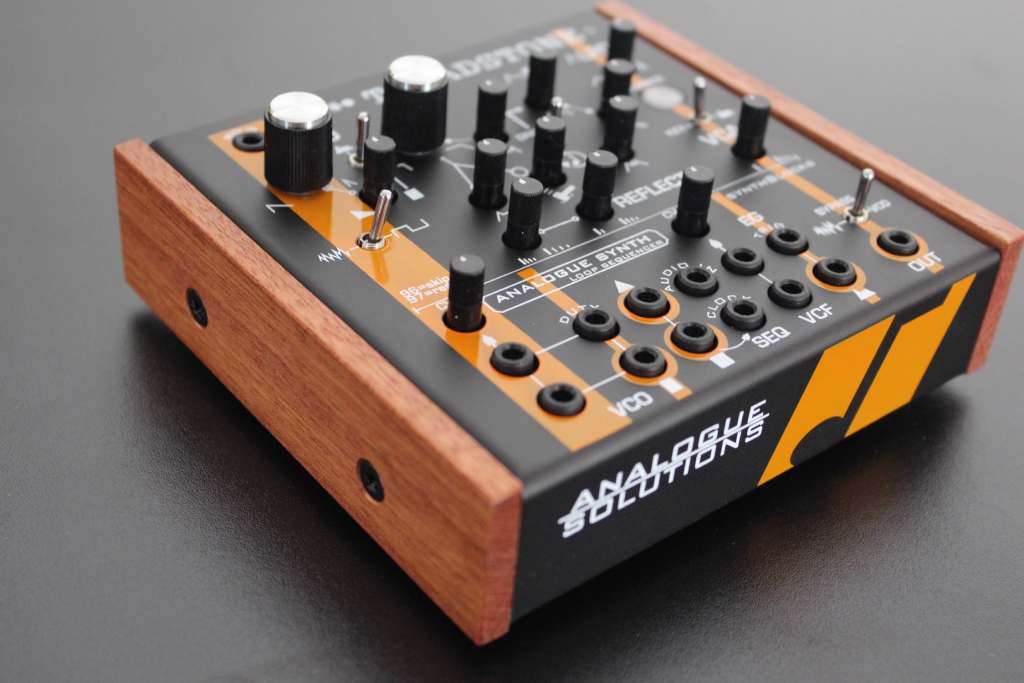 Hot on the heels of its inaugural Mr Hyde and Dr Strangelove so-called synthBlocks, British boutique electronic instruments innovator Analogue Solutions has just widened the series’ scope with Treadstone — a true analogue mono synth that packs a lot of (patchable) punch into a perfectly-matched, portable package.

Treadstone boasts an all-analogue audio path and modulation circuits based on superior-sounding designs dating back to the mid-Seventies, so no CPU (Central Processing Unit) stabilised and quantised circuits, no DCOs (Digitally-Controlled Oscillators), and no digital EGs (Envelope Generators), as are often found on other ‘all-analogue’ affairs.

Analogue as in really analogue — aside from the MIDI-to-CV circuit (which, by its very nature, must include a digital element) — in other words.

Winning analogue attributes apart, this pocket-sized powerhouse packs a lot into its 134 x 125 x 52mm diminutive dimensions — including a serious single VCO (Voltage Controlled Oscillator) with square and sawtooth waveforms plus noise and an associated sub-oscillator, a reissue of the classic SSM2044 4-Pole VCF (Voltage Controlled Filter) chip (as used in many classic synths, such as the Korg Polysix and Monopoly, as well as E-mu’s Emulator and SP1200 sampling trailblazers), an analogue echo (REFLECT), and a unique LOOP SEQUENCER (to input, edit, and play up to 16 MIDI notes) — while weighing in at only 420g!

Treadstone is designed, built, tested, and assembled in the UK using only high-quality components as is the Analogue Solutions way, with a full rugged steel/aluminium case combined with real ‘analogue’ wood side pieces perfectly reflecting its polished pedigree.

Thoughtfully, Treadstone is fully compatible with the ever-popular Eurorack small-format modular system and operates on the 1v/oct standard, so, armed with a fistful of 3.5mm mini-jacks, justifiably serious synthesists can interface it with their modular system or have it act as an exceptional external voice for another analogue synthesizer — after all, Oberheim’s Synthesizer Expander Module® (SEM) started life as an add-on synthesizer module for fattening up Minimoogs before becoming a sought-after sound in its own right (with up to eight embedded in Oberheim’s groundbreaking Seventies-vintage polysynths). Reality shows that Treadstone sounds a lot fatter than it looks!

Treadstone has an AUDIO IN (input) socket, so users can feed external sounds through the onboard analogue filters for analogue processing. Producing electronic percussion sounds — such as kicks, snares, hi-hats, and cymbals — is perfectly possible in the hands of skilled synthesists.

Speaking of which, while Treadstone is partially pre-patched, many of these patches can be cancelled using the switches and controls. Indeed, it has such wide-ranging modulation routing possibilities that it is almost as versatile as a full modular system and can create similar sounds — and all without the mess and confusion of cables! Cables, of course, can be used to re-patch Treadstone, thanks to an abundance of carefully chosen patch sockets, or connect externally elsewhere.

UK purchase price for the Treadstone synthBlock is £499.00 GBP (including VAT), via dealers and Analogue Solutions directly.

North American availability of the Treadstone synthBlock is being handled via Voltage & Company — full-service reps of high-quality manufacturers from around the world — with a retail price of $599.00 USD, while (most) EU distribution is being handled by Sonic Sales — one of the largest full-service MI (Musical Instrument) distribution companies in Europe — priced at €589.00 EUR (including VAT).

For more in-depth info, visit the dedicated Treadstone webpage. Last but not least, make sure to check our One Synth, One Song episode featuring the great Analog Solutions Nyborg-12!