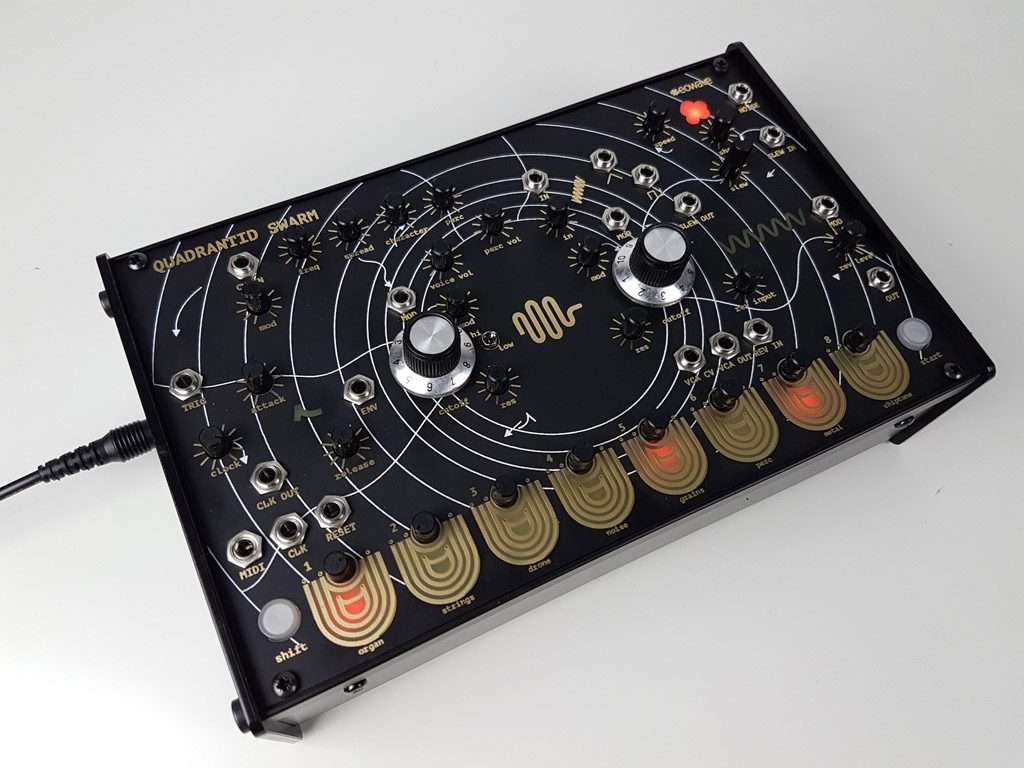 The Eowave Quadrantid Swarm was one of our favorite sound toys at SuperBooth 2017 and we’re happy to see it’s getting closer to production.

The French company has just launched a Kickstarter campaign (already quite successful) and the first units should be available in April 2018.

This was our close-up video shot months ago in Berlin. FYI: the final release will be slightly different from the prototype you can see here:

The Quadrantid Swarm is a desktop touch synthesizer aimed at sound designers and musicians who are looking for an expressive tool to explore rich and unusual soundscapes with a direct intuitive approach.

Past research and development at Eowave has contributed to a range of successful products aimed at musicians and performers – including sensor interfaces, MIDI devices, modular synthesizers and more.

This has been honed and distilled in the Quadrantid Swarm. It is an instrument that has been designed openly – to be used with MIDI, alongside your modular synthesizer/CV sequencer or to be explored as a standalone drone/sequencer/generative synthesizer.

The QS now features 8 modes. Each should be considered a springboard for musical exploration, rather than a preset. The modes are not direct emulations of existing instruments, but they borrow on inspiration from their namesakes.

They found that this was the best way to retain the immediacy of function per button design while offering a generous feature set. The QS will ship with a cheat sheet that details the specifics behind each mode – the waveform, perc sound and character effect.

Here’s another video showing the Quadrantid Swarm playing some chords:

What Kind Of Sounds You Can Get Out Of It?

For what we could see and hear, the Quadrantid Swarm is a quite flexible and inspiring instrument, albeit in a lo-fi way (which makes it even more interesting for us!).

Here you can listen to some quick sound demos… 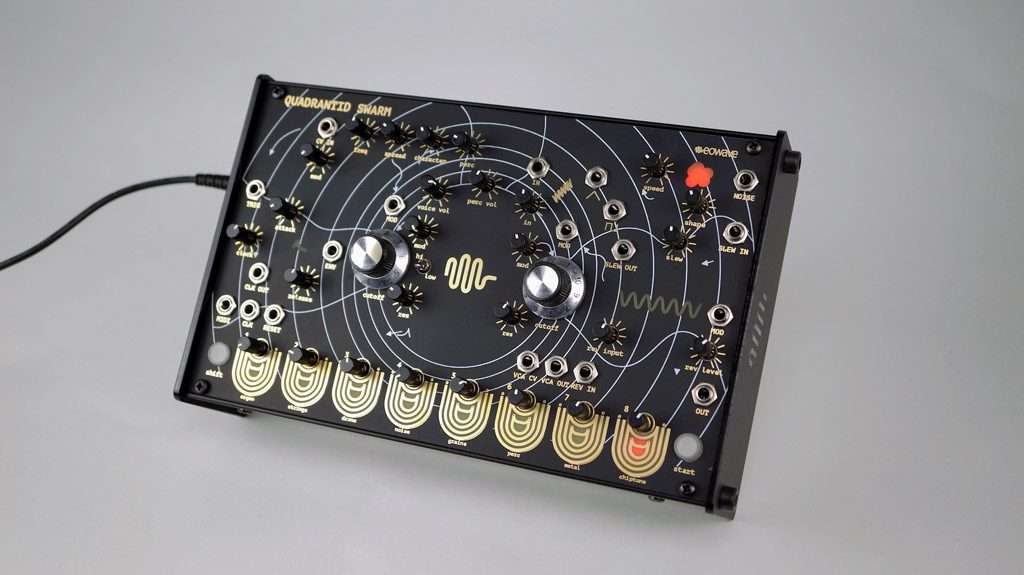 Building on the feedback Eowave received at Superbooth 17, they have redesigned the front panel to be easier to read. This matte black PCB pictured below is the final material they will be using on production, although there is a mistake on this panel that will be rectified (white layer inverted!).

The oscillator section is a digital wave generator. In sequencer mode (activated when you push start) the spread control multiplies the waveform up to 8 waveforms. In live mode (sequencer not active) the spread control will not affect the oscillator because the 8 waveforms are spread across the touch keyboard to be used as a simple polyphonic synthesizer. Character controls a different effect or folder depending on the mode. The character effects/folders will help you design timbres that will range from clean and glassy to dense and distorted.

They have also added in a sine wave which isn’t processed through the spread or folder, giving an extra layer to your sound design

Tied to the fundamental frequency of the main oscillator is a percussive element. The type of synthesis implemented is different for each mode.

A simpler mixer section, feeding into the two filters directly below, comprises of three inputs. One for the oscillator voice, one for the perc voice, and one spare. The spare input can be used to patch in an external signal, utilising the filters. With nothing patched in, the third input is pre-patched as a feedback for the spring reverb (which will overdrive/distort with high gain levels to great effect).

Two 12db filters,  based on our ‘fluctuations magnétiques’ module. Filter 1 can be switched between high or low pass. Filter 2 is low pass. Using the two filter poles together you can create a bandpass and other interesting filter shapes. This allows for rich, throaty and deep sound sculpting.

Two modulation sources unlock the expressivity of the synth. The first is an envelope, pre-patched to the cutoff on filter 1, and also patched to the VCA. The LFO section is pre-patched to the cutoff of filter 2 and features seven selectable waveforms via the shape function, and an 8th mode which is the sequencer CV out (allowing the sequencer to be patched to other devices). Speed is set using the speed knob. A square output has been included which can be useful for triggering clock resets and other timing functions. A slew in, out and attenuator has also been implemented to further your modulation experiments.

An analog spring reverb adds bundles of character to the QS, and can be mixed and used to feedback into itself for chaotic overdrives. The reverb section can be used independently of the synth with your other devices, by patching a cable to REV IN, and using the main output.

Eowave will be including a standard MIDI to 3.5mm adaptor to use in your live or home setup. CV, trigger, clock and reset inputs are also featured to use with eurorack standard devices.

Eowave designed the QS for immediate use without having to worry about complex patching, so pre-patching is used to make connections in logical places. Some of these are highlighted using arrows, particularly the modulation sources and connections, the audio routing hasn’t been highlighted to keep the design clean, but is explained above.

To select a mode, hold shift and press the desired key. In live mode (sequencer inactive) you can play the keys as a traditional keyboard. Pots 1-8 are to tune each step. Press start to begin sequencer mode. Now each key acts as a gate on/off. Active gates are represented with a red LED. Press start again to stop the sequence and return to live mode.

Capacitive touch relies on the conductive nature of your body. The keyboard is used in selecting modes, turning on and off sequencer gates and playing the keyboard. Some of the modes also feature pressure sensitivity, allowing for velocity type control of the synthesizer.

The QS has no memory to save settings or sequences. The 8 modes are the only form of memory and cannot be overwritten. It is designed this way – as a tool for sketching, patching, jamming and experimentation. You can of course use your favourite sequencer to send clock, notes and gates over MIDI and CV.

Starting from € 425 (for early bird supporters). Visit the Kickstarter page and Eowave to learn more.