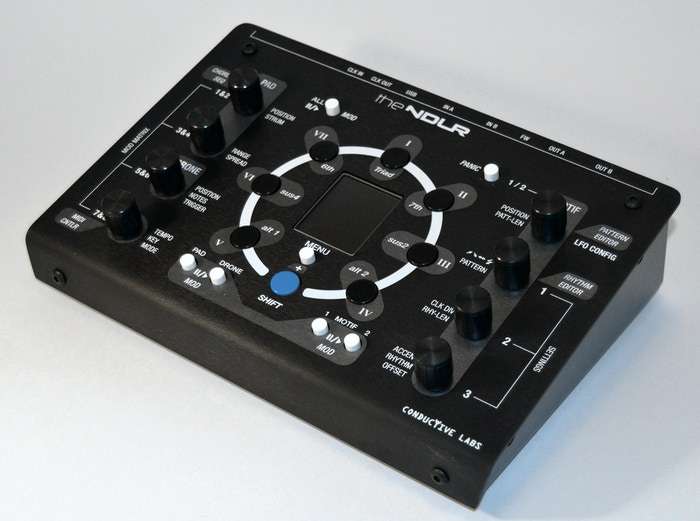 Arpeggiators (especially well-designed ones) are one of the reasons why many of us fell in love with electronic music. We’re used to seeing them on hardware and software synthesizers, but they can be found even on modern hardware sequencers (such as the Squarp Pyramid)  and dedicated iOS apps (such as Arpeggionome).

There are times though when the arpeggiator in your synth is kinda boring, or when the synth you’re using sounds fantastic but… doesn’t have any feature like that (I’m looking at you, Vermona PERfourMER!). Well, for these (and possibly many other) purposes, Conductive Labs has launched a Kickstarter project to produce The NDLR (‘noodler’), a hardware multipart polyphonic arpeggiator. Here’s what the company has to say about the NDLR…

The NDLR fits between your sequencer and keyboard controllers and your sound modules, and translates what you play into up to four parts: a drone note, bass line, pad notes, and a motif sequence.

The NDLR can play up to eight synthesizers via MIDI. It can send…

All the above mentioned technical details melt away while playing The NDLR. But we quickly realized while developing those features that keeping songs fresh with ever changing patterns and chord progressions is vital. The chord degree and chord type can also be selected externally by a sequencer. The notes played by the sequencer become the root notes of the chords that The NDLR plays.

The eight encoder knobs enable you to vary the sequences, rhythms, densities and range of notes. There are also three LFOs and two randomizers that can be assigned in the x8 modulation matrix to any of the parameters of The NDLR or to external MIDI CCs. This ensures that in addition to the motion of your synth patches there can also be an automated chord progression and modulation of The NDLR parameters.

The NDLR is being funded via Kickstarter and is available for $199. See the project page for details.