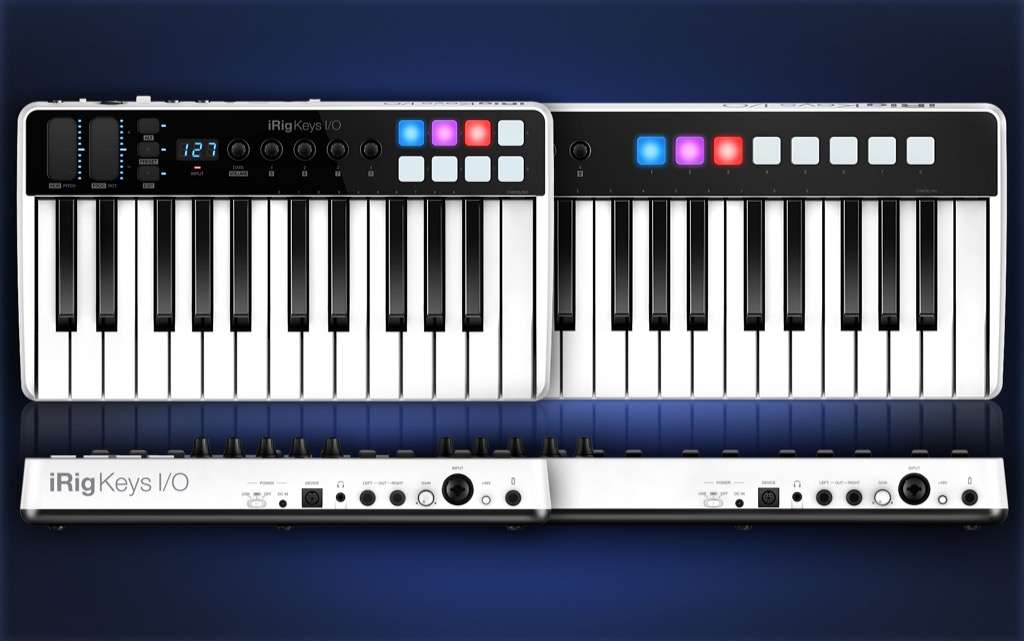 iRig Keys I/O features 24-bit audio up to 96kHz sampling rate, a combo input jack for line, instrument or mic input with phantom power, balanced stereo output and high quality 1/8″ headphone output ideal for use with the latest Apple® devices like the iPhone® 7.

iRig Keys I/O also includes all the controls users would expect from a premium keyboard, including velocity sensitive multicolored pads and programmable touch-sensitive sliders, buttons and knobs in an ultra-portable package that includes everything needed to create complete music productions and is unmatched for speed and simplicity to connect and set up.

Before we go any further, check out this trailer for the iRig Keys I/O music production station:

Built-in professional audio interface
iRig Keys I/O is the only controller range currently available on the market today featuring a professional 24-bit, 96kHz capable audio interface.
This keeps cabling to a minimum and makes setting up as fast and easy as just plug and play.

For recording the combination input handles 1/4″ or XLR sources and provides the best possible audio quality with a Class A preamp for dynamic and condenser mics (including 48V phantom power), to line instruments along with guitars and basses.
When used in live performances the 1/4″ balanced stereo output allows for long cable runs directly to a PA or mixer which is perfect for keyboard players and DJs.

All of this makes iRig Keys I/O the ideal creative tool for studio or live use, in any situation, providing a solution that is more convenient and affordable than having to buy a controller and audio interface separately.

Control with touch
Starting with a fast synth-action keybed that improves on all previous IK keyboards, iRig Keys I/O includes all the controls expected from a premium controller and more.

There are also 2 fully programmable touch control strips acting by default as Pitch and Modulation controls. A complete touch sensitive transport and button section rounds out the controls available.

All knobs, sliders and buttons are touch-sensitive using capacitive technology for ultra-fast action and immediate feedback, displaying the related parameter value just with a simple touch. 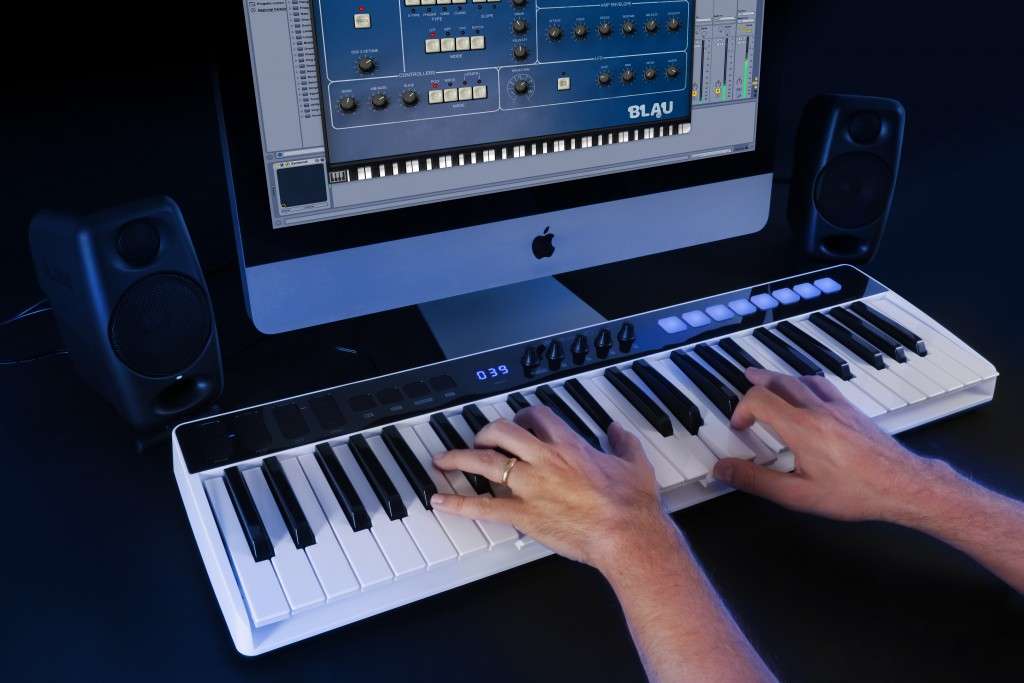 True plug-and-play
Being certified Apple MFi hardware (Made for iPhone and iPad) and thanks to the on-board audio interface, iRig Keys I/O works out of the box with all iOS devices with a Lightning port, including the latest generation iPhone 7 that does not have an audio output jack. The included Lighting cable allows for easy plug-and-play operation with Apple iOS devices and the USB cable connects Mac and PC computers. iRig Keys I/O also works seamlessly with popular Digital Audio Workstation (DAW) software like GarageBand®, Logic®, Ableton® Live™ and more.

Goes anywhere
iRig Keys I/O 25 and 49 key versions are the smallest controllers with full-size keys on the market today. This is a great advantage when working in studios or environments where space is at a premium and ideal for the traveling musician, not only for their ultra-compact size but also because they are 25% lighter than the nearest competitor.

Furthermore, iRig Keys I/O can be powered by USB, an optional external power supply (that simultaneously charges an iOS device) or with 4 AA batteries for mobile music production anywhere. 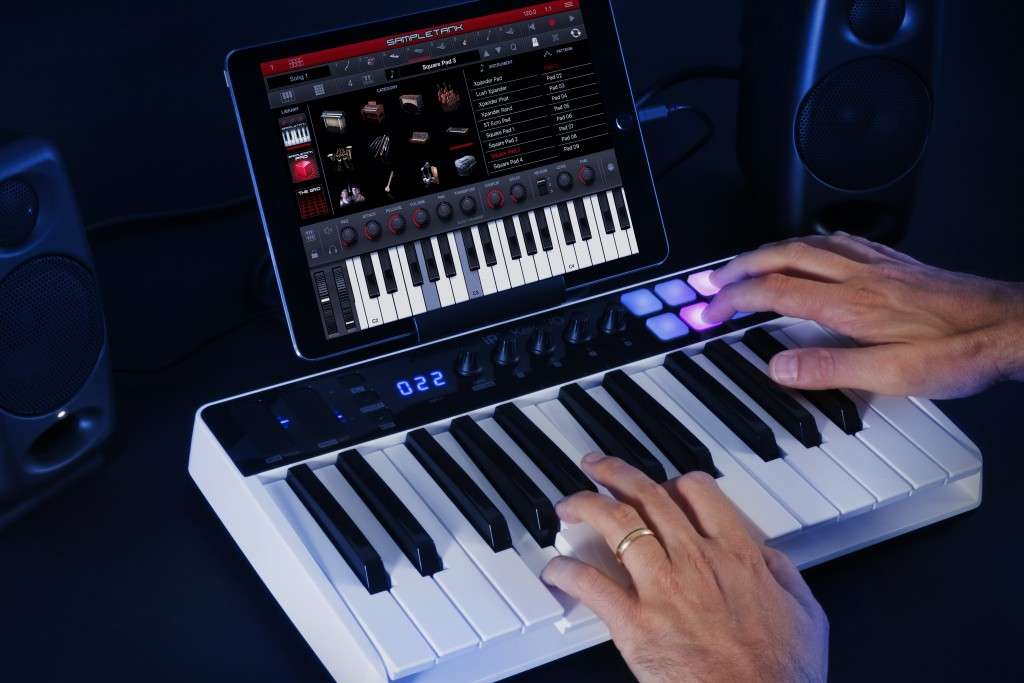 Full suite of software included
With over $/€550 (in the 25-key version) and $/€750 (in the 49-key version) worth of IK software and apps, iRig Keys I/O includes an unrivaled selection of software allowing for complete productions when combined with a DAW or free composing and recording software like GarageBand.

Included in both 25 and 49 key versions is Ableton® Live 9 Lite™ digital audio workstation, SampleTank 3 sound and groove workstation with over 43GB and 5000 sounds, T-RackS 4 Deluxe mix and mastering suite with 9 EQ and dynamics processors, and the Syntronik Pro-V vintage synthesizer.

Plus, iPhone and iPad users receive the full version of SampleTank. Additionally, the 49-key version comes with Miroslav Philharmonik 2 CE orchestral workstation for Mac/PC and the mobile edition for iOS.

Pricing and availability
iRig Keys I/O will be available in October 2017 and can be pre-ordered now from the IK Multimedia online store and IK authorized dealers worldwide for the remarkably affordable price of only $/€299.99* for the 49-key version and $/€199.99 for the 25-key version.

In addition to the massive bundle of included software, iRig Keys I/O also comes with 4 x AA batteries, Mini-DIN to USB and Mini-DIN to Lightning cables and a device stand for iPhone and iPad.