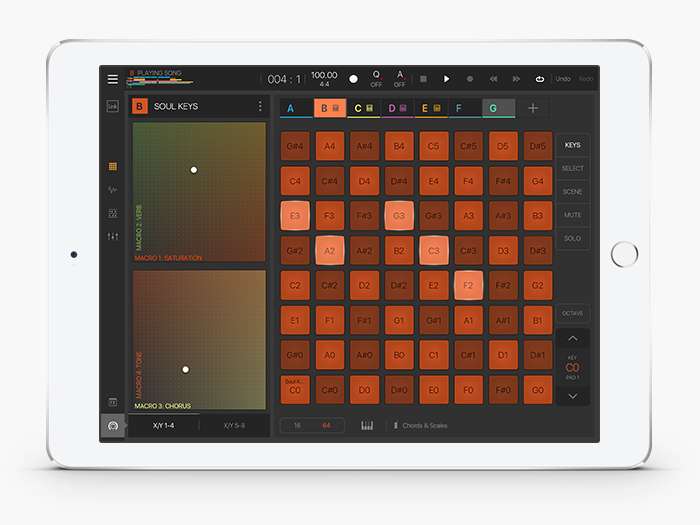 Intua have been talking about Beatmaker 3 for years and consequently the buzz, hype and expectations for this app have been high. Beatmaker 2 was and is a superb app, it was my first iOS DAW and although it had it’s flaws and idiosyncrasies if was my go to app for recording, arranging and mixing in pre-Auria Pro days.

Beatmaker 3 builds on the workflows and good parts from Beatmaker 2 but is not just an updated version it is most definitely a whole new app in its own right.

BM3 is now probably the closest thing to an Ableton Live style workflow clip/scene launching that you are likely to find on iOS. The interface has some of the Akai MPC workflow that appeals to Beat Makers but this is a fully featured DAW rather than just being a beat making machine.

The main interface is based on 8 banks of Pads (A-H) with up to 128 Pads/Keys per bank. The pads in BM3 should not be thought of as simple sample per pad layout of an MPC but more a set of sounds. Each pad can be assigned a sample, Audio Unit or Inter App Audio or Audiobus app that can, in turn, be played from that one pad at multiple pitches with a traditional keyboard layout or pad layout.

Things can be a little overwhelming when you open the app for the first time and as with any app this fully featured you would be advised to invest 15 or 20 minutes flicking through the manual to understand the basic concepts at play.

Once I got my head around the interface and concepts like the performance based parameter tweaking “Macros” the workflow is fairly intuitive. It seems a lot of time and thought was put in to improving the workflow which was a major complaint of many in relation to BM2. 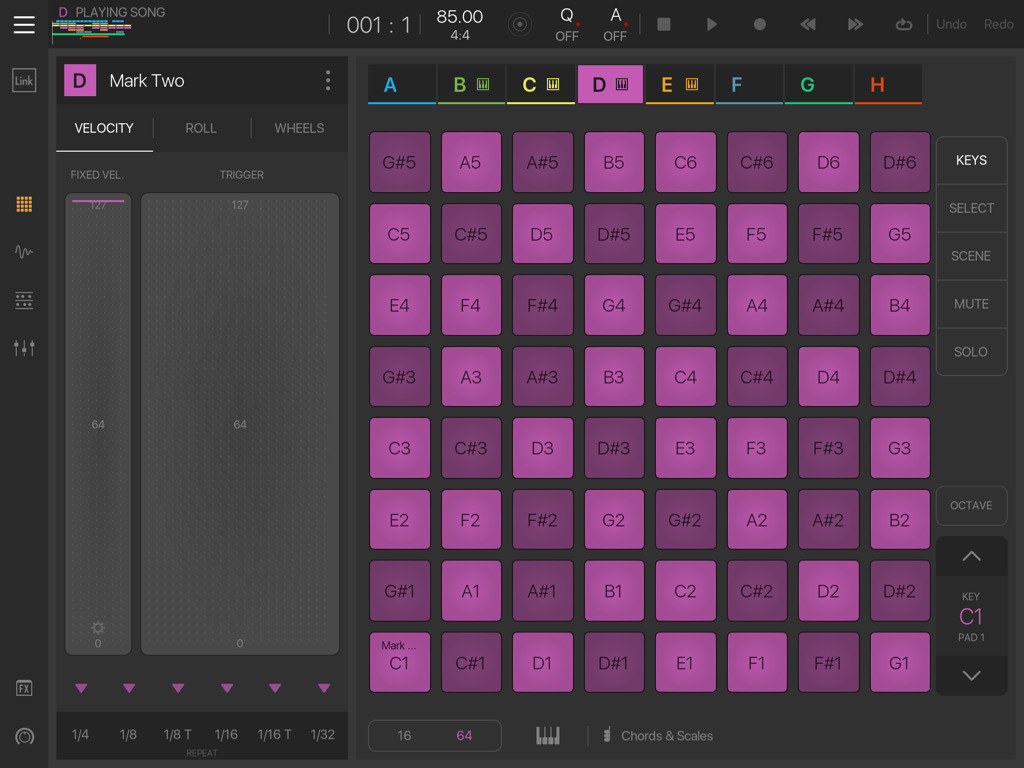 A sequencer with Options:
You can arrange your tracks in BM3 using a traditional Linear arrangement (Song View) or Ableton style launching (Scene View).The Scene View allows you to arrange groups of patterns into scenes which can help with structuring your track.

A good example of how this could be used would be to use it to create scenes for Intro, VerseA, Chorus, Middle8, VerseB, Reprise, Outro. After creating various arrangements of patterns (Scenes) you can then arrange these or trigger them live in a performance to try out different transitions and ideas for your song structure on the fly. 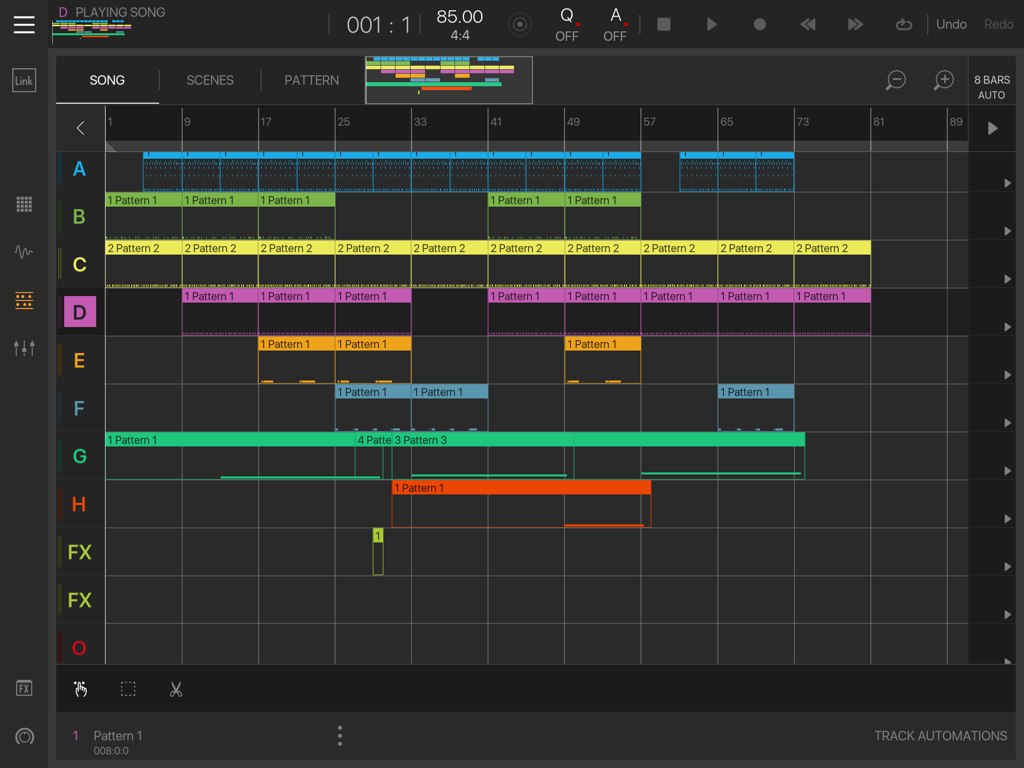 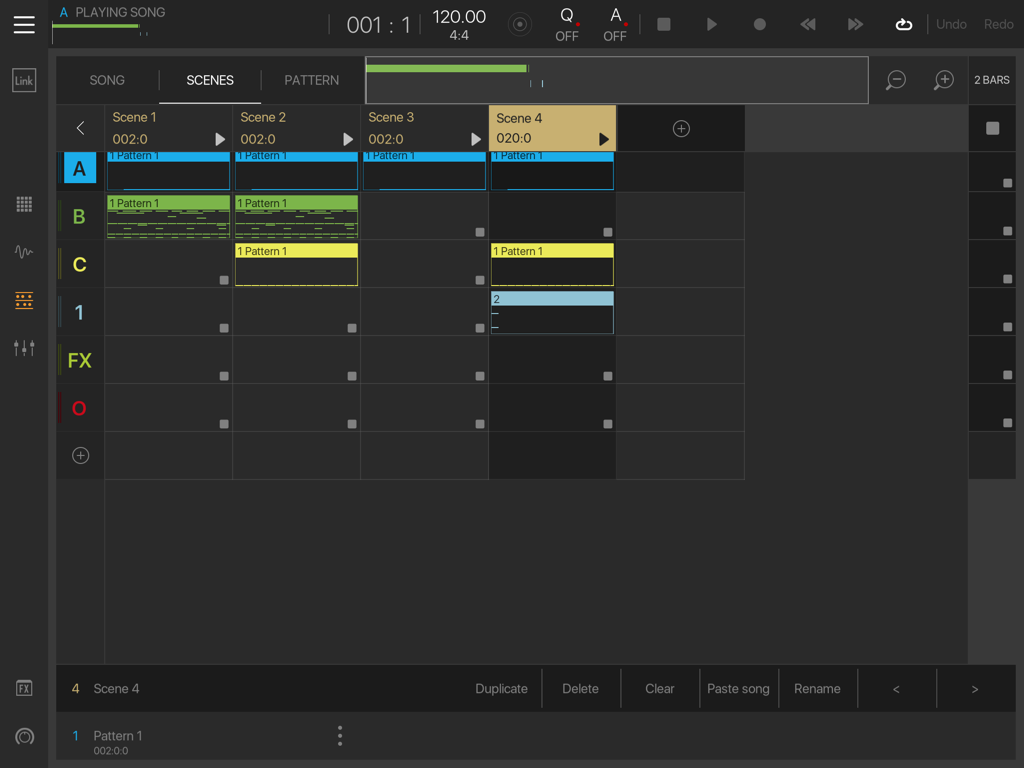 Other nice touches are variable tempo synced Repeat mode on pads and the fact that keyboard scale options are included and various chords can be triggered from a single pad. Ableton Link is available for syncing to other Link enabled apps.

The Live time stretch option is particularly useful. If you record some audio to an audio track whether that is a guitar, an app or voice if you enable live time stretch that audio will stretch automatically to a change in BPM without changing the pitch.

If you record a middle C major pattern on a piano through a mic on an audio channel at 80bpm for example, with live time stretch that will play the same C pattern in time with Beatmaker 3 BPM set to 40bpm or 299bpm. The audio artifacts are audible with extreme time stretches but the Elastique V3 algorithm used does a great job at keeping things sounding natural rather than processed.

Here is a short demo video if you are interested in seeing how BM3 works: 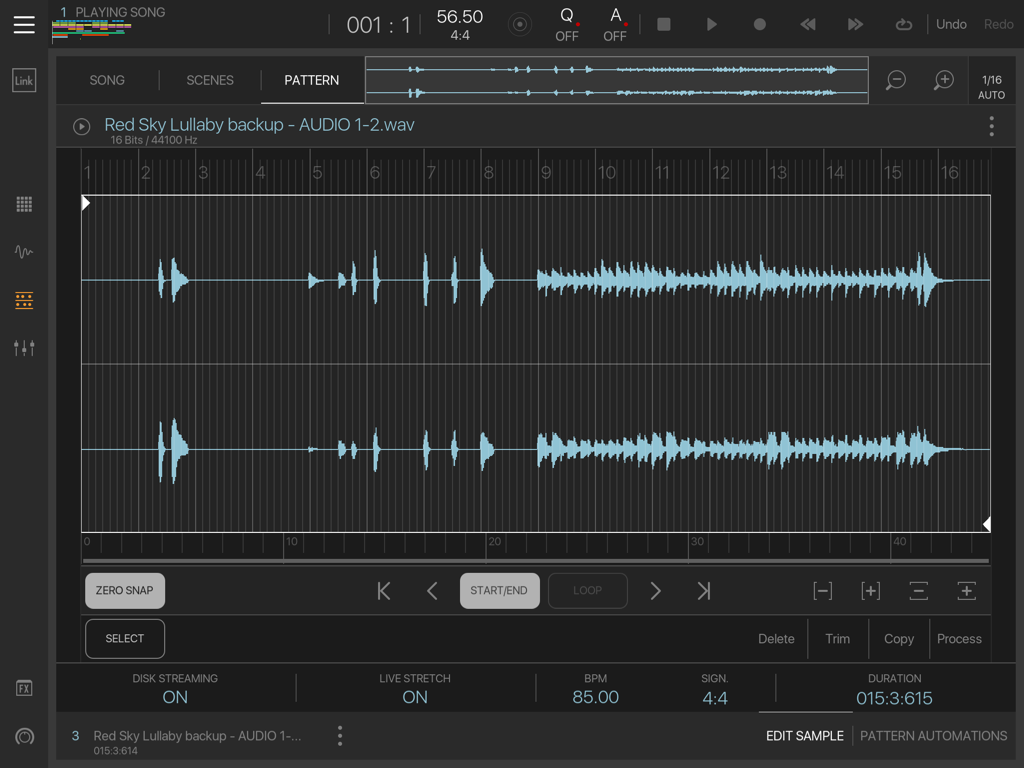 BM3 is a great app but there are some things that would be great to see.
The sequencer allows you to zoom in to a grid at up to 1/64 level wheras BM2 allowed up to 1/96. For most this will not be an issue but if you want extra fine control when dropping in samples or notes you may miss this option.

Transient detection for sample slicing points with a variable trigger level would also be a nice addition for easier sample slicing.
The included Chords option is good but being able to choose custom chords per pad would be great.

Currently to record an IAA or AU instrument “live” to an audio track you have to assign it to one of the pads within a bank then select that specific pad within the bank as your internal input for the Audio Recording channel.

A nice addition for quick overdubs might be to allow AU and IAA as a direct input to Audio channels without needing to assign to a pad within a bank first.

Intua have a long track record of supporting their apps. Beatmaker 2 has been around over 5 years and has received regular updates including Link support even while they were working hard on the new app. This bodes well for the future of Beatmaker 3.

In conclusion, I would say no matter what genre of music you make there is a good chance you will find something useful in Beatmaker 3’s extensive feature set. It can definitely act as your main hub for recording, arranging and mixing your music if that is what you want it to do.

However where BM3 obviously shines is in sample based music making and if you use samples extensively in your music this is an app unlikely to result in any app regret.
If you’re serious about making music on your iOS device, these are the best $39.99 you’ll spend in a long time.
To read more and get Beatmaker 3 visit the App Store.