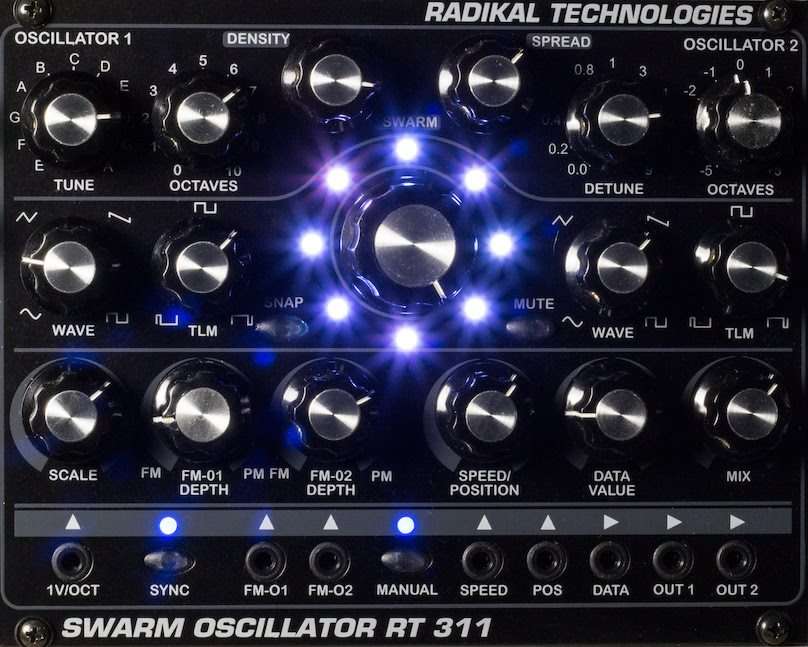 As the name implies, the RT-311 goes far beyond the realms of standard oscillator fare thanks to two oscillators that can both build swarms of (up to eight) oscillator ‘clones’. These clones are capable of being pitched in musical intervals, chords, clusters, or fat detunes, dutifully backed by having all parameter settings saveable as interpolatable snapshots, enabling even more radical results. 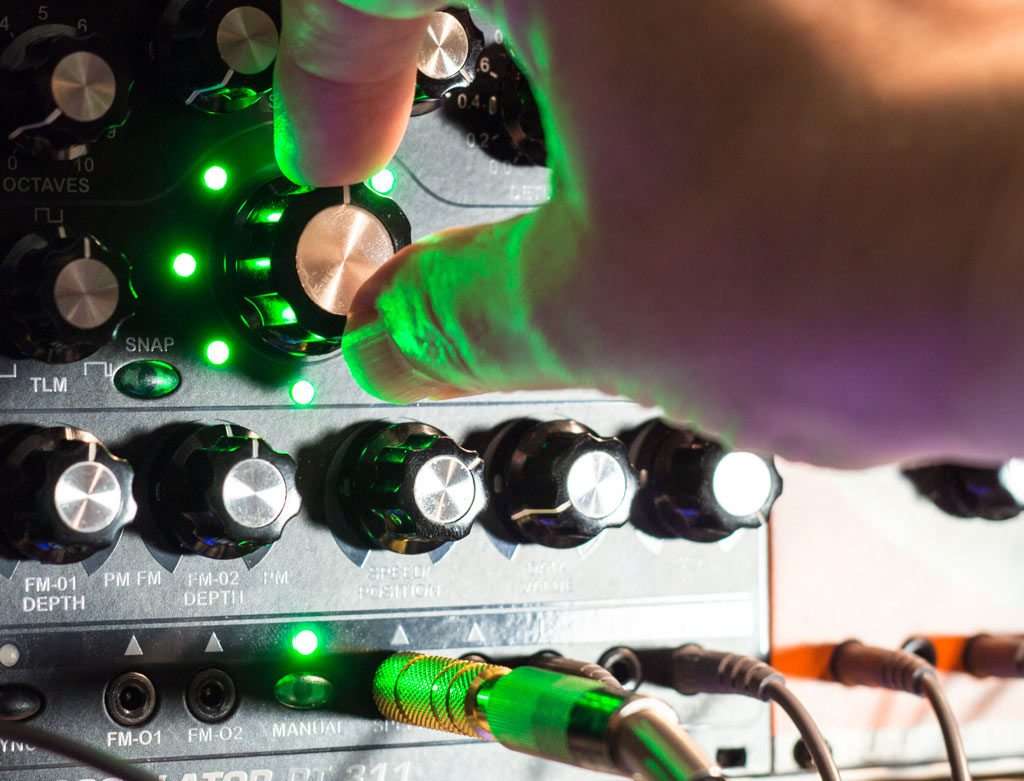 Switched into (its default startup) Manual-Mode of operation, the RT-311 SWARM OSCILLATOR can function much like any other Eurorack-compatible all-analogue oscillator out there with OSCILLATOR 1 and OSCILLATOR 2 respectively appearing at the two (OUT 1 and OUT 2) outputs as sound sources for further manipulation elsewhere — using Radikal Technologies’ own RT-451 DUAL MULTIMODE FILTER module, for instance.

In this scenario, the sound of the RT-311 SWARM OSCILLATOR module matches exactly what would be expected from the potentiometer-controlled parameter positions on its 32 HP (Horizontal Pitch) sized front panel; putting yet more controls at adventurous users’ fingertips, both banks of oscillators feature WAVE controls for smooth transitions between waveforms and TLM (Timelinearity Modulation), a variation of pulse-width modulation — known from Radikal Technologies’ SPECTRALIS 2 ANALOG SYNTHESIZER/ BEATMATRIX/FILTERBANK desktop hybrid — that can be applied to all waveforms, while exponential FM (Frequency Modulation) and linear FM modulation or PM (Phase Modulation) are also available alongside oscillator synchronisation. Pitch is, of course, controlled by the (calibrated) 1V/OCT input (which can be quantised so that only pitches of a certain tone sequence or scale are output).

Other operational modes make more radical results really shine through, though. Switching Snapshot-Mode into play permits the RT-311 SWARM OSCILLATOR to store up to eight memory setups, each with eight snapshots, saving all oscillator settings and memorising them even after whatever Eurorack small-format modular synth system is playing host to the module has been powered down! Such snapshots are assigned to one of eight positions accessible via the ‘big knob’ dominating the RT-311 SWARM OSCILLATOR’s front panel.

Put it into Interpolator-Mode and everything (literally) revolves around the cyclic traversal of those snapshots, smoothly crossfading from one to the next with transitions taken care of via voltage control, an internal LFO (Low Frequency Oscillator), or the big knob itself — either way, the surrounding eight LEDs (Light Emitting Diodes) illuminate accordingly in user-chosen colours, helpfully highlighting which snapshot is playing at any given time.

Now shipping, the RT-311 SWARM OSCILLATOR is available for purchase from Radikal Technologies stockists at an MSRP of €598.00 EUR (in Europe) and $659.00 USD (in the US).