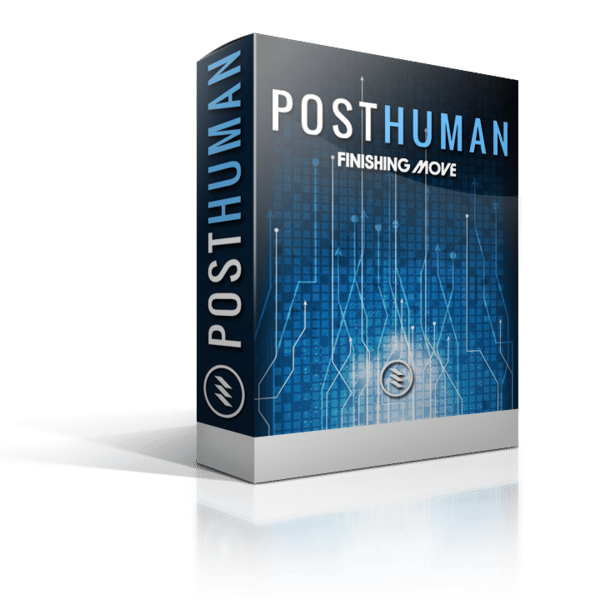 In terms of sounds, Posthuman is just excellent. It may be a one trick pony but that pony is an android unicorn crying desperately in the overgrown desolation of post-nuclear Chicago!

Pros:
– Sound quality
– Easy to use

Cons:
– You can’t switch out the individual sounds on each patch

Posthuman is a 4GB library of pads, plain and simple: 50 patches packed with custom-designed sonic artistry.

At the core of Posthuman is a large XY pad that enables crossfade between the 4 different sounds that are loaded with each patch. The sounds are located in each corner of the XY pad, and by dragging the cursor around the pad the sound morphs between the sounds.

Each patch comes with a preset recording of cursor movement between the sounds. So you can load a patch, play a note and the sound evolves with the pre-recorded XY path. To tweak more to taste, you can record your own cursor movement on the XY pad, setting up to 5 points to move between, by hitting the record button beneath the pad and squiggling your mouse around.

You can adjust the speed of the movement with the path rate knob, and you can hit the edit button, and move each of the 5 points anywhere on the XY pad, to adjust the movement. If you’d rather just automate it all in DAW you can set Midi CC for the Pad’s X and Y axes (along with most other parameters) under the advanced tab at the bottom of the GUI. 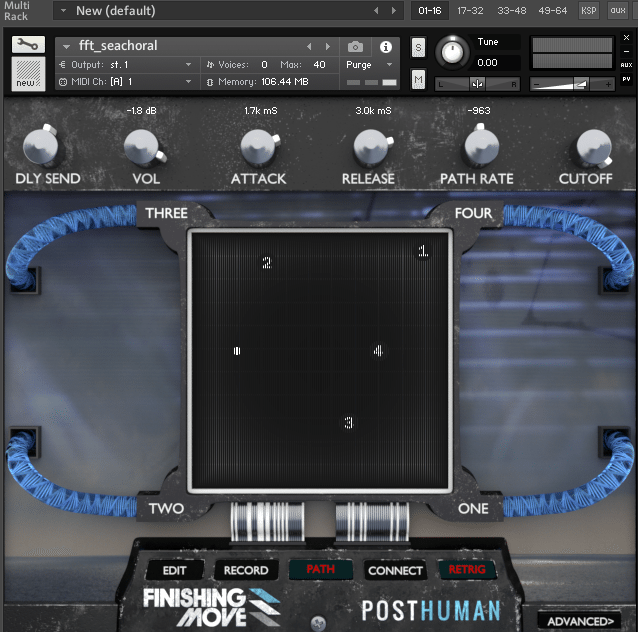 In terms of further manipulation of the sounds, you can change the attack and release lengths, send signal to a delay (that you can tweak under the aforementioned ‘advanced’ tab) and adjust cutoff frequency.

Posthuman is a one trick pony. But that pony is an android unicorn crying desperately in the overgrown desolation of post-nuclear Chicago. I’ve had too much coffee writing this article!

In terms of sounds, Posthuman is just excellent. The impression the sound atmospheres left on me I would describe as distant, haunting, ethereal and metallic, yet with human and organic movement.

The library title is very apt: think of a melancholic post-apocalyptic movie. The sound sources are a blend of organic (Cello, piano, vocals) and mechanical (oven, bike, electric toothbrush) and the sound constantly veers between the two. The internal movement of the sounds combined with delay just captures the ear. Beautiful.

The scripting is simple and to the point, which to me adds to the usefulness of the library as a tool – you’re not going to get lost in tweak land. Having said that, I would have loved to be able to switch out the individual sounds on each patch. Maybe that’s for another iteration.

The library also comes with a TouchOsc template if you’re using that app. I can highly recommend this library. Great work by Finishing move. Here’s a walkthrough from the creators:

Price and Availability
You can buy this library for $75 from here.

Specs
FULL VERSION of Kontakt 5.5.1 You can’t use this with the free player.
Mac 10.9 or higher Windows 7 or higher
Intel core 2 Duo 4GB RAM